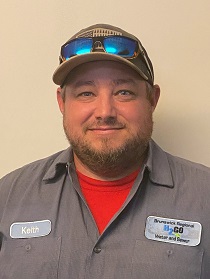 Gore currently serves as the collection systems ORC for H2GO, where he has been employed for 15 years, officials said.

The award "is given to an individual in the water industry who has contributed to the successful operation and maintenance of their collections system," stated the release.

“Keith provides guidance and encouragement to all of our employees,” Bob Walker, H2GO’s executive director, said in the release. “His passion for the industry and dedication to improving our system is highlighted everyday with his work.”

Since taking on the role at H2GO, Gore has made notable improvements.

"He created an open line of communication with his employees to actively answer any questions they may have and make them feel engaged. His promotion of safe handling of equipment has led to more efficient and effective work," officials said in the release.

In addition, H2GO received the Disaster Preparedness and George W. Burke, Jr. Safety awards from the N.C. American Water Works Association and the N.C. Water Environment Association. The utility received both of these awards previously in 2017.

Tom Gale to serve as 2021 president of Cape Fear Realtors