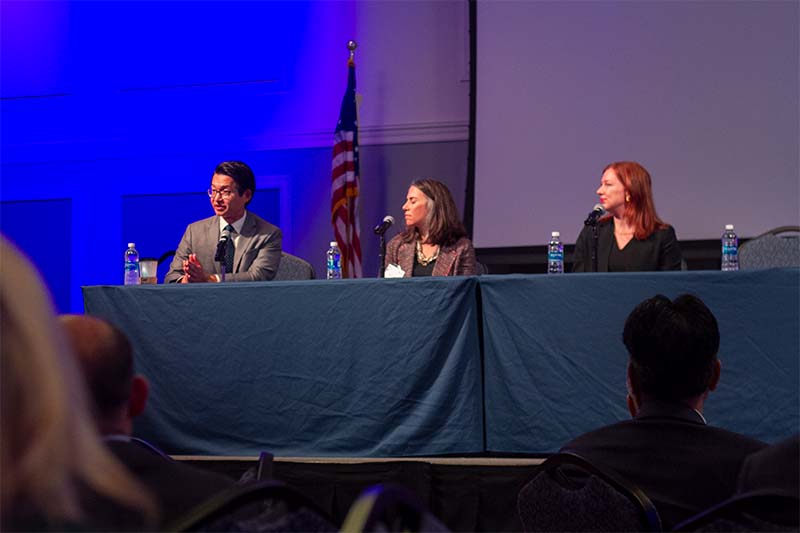 Chris Chung, CEO of the Economic Development Partnership of North Carolina, addresses the audience at the Wilmington Chamber of Commerce's 2022 Economic Summit. (Photo by Johanna F. Still)
The Wilmington Chamber of Commerce’s 2022 Economic Summit featured expert economic speakers who largely focused on the timely topics of attracting a talented workforce and the inner workings of site selection.

Guettabi’s presentation, entitled, “Talent wars are here to stay: Cities need to adapt,” focused on metrics that extrapolate where younger and educated workers are moving in the U.S.

“It doesn’t matter how great of an incentive package you give a firm unless you have the workers that potentially are going to fulfill that firm's mission,” he said.

The area is a bit “top-heavy” in terms of its age distribution, and clearly lacks enough young people to replace the aging population, Guettabi said. "The growth is going to have to come from migration or from a change in demographics," he said. Demographic profiles are important in terms of talent attraction and retention, Guettabi said, and should be considered as part of an area's overall strategy.

Like other growing metropolitans, Wilmington has seen a large shift in remote workers since the pandemic, from 4% in 2010 to 18% last year, Guettabi said.

The growth has also led to a larger proportion of the Wilmington population with a college degree or higher, from roughly 33% in 2010 to nearly 40% in 2021 – a sign that the area is "winning'" the talent war.

Young workers tend to cite cost of living, housing cost and availability, safety, health care, availability of jobs, outdoor recreation, transportation and walkability as attributes that matter to them when making a decision to relocate.

"Talent is very footloose," Guettabi said. "We know that firms move, but people vote with their feet as well."

Beginning in January, the firm will assist the chamber in creating a new brand strategy to help market the region to potential talent and employers.

DCI’s vice president of brand and digital strategy, Patience Fairbrother, said the area will benefit from not having a strong negative reputation, which can be a difficult marketing barrier to changing perceptions. Fairbrother said references to “Cape Fear” and "Port City" feel "a bit old” and the area’s brand could be refreshed. “I think we need to flip that on its head.”

She shared success stories from other metropolitans that have marketed their strengths and said focusing on just a few of an area’s top attributes can help more clearly communicate to newcomers. Online branding has generally eclipsed in-person visits in terms of first impressions, she shared.

Quality of life is now the top reason people move, she said, based on recent survey results that completely differ from a pre-pandemic world.

The hard-to-pin-down attribute has also become more prioritized by companies in the site selection process, said Sarah White, a principal and vice president of site selection at Global Location Strategies. Behind cost, schedule, permitting and other factors, quality of life used to land at the bottom of companies’ priorities, White said. “Now, because of the workforce strain, that has really become so much more important.”

The K-12 education pipeline is becoming more relevant in both talent recruitment and site selection, the panelists said. Chris Chung, CEO of the Economic Development Partnership of North Carolina, said the top pain points for executives when assessing any area are: housing affordability and availability; transportation and congestion; and school class sizes.

A lack of housing is a nationwide issue, White said. “Many of the communities we work with very much check the box for low cost of living, low cost of housing, but they don't have housing inventory,” she said.

States that have the most well-regarded education metrics often don’t bode well with companies in the site selection process, Chung said, possibly due to higher taxes, while the inverse is true for those that attract big deals  – a phenomenon he said he’s never quite been able to square. “To underinvest in education in whatever metric you use is probably not a wise long-term strategy for any state,” he said.

Chung said the bulk of the state’s inquiries and deals are coming from manufacturing projects rather than office-based opportunities, possibly due to the rise of remote work. “Those types of deals… have largely evaporated from the pipeline today,” he said.

The first asset that comes to mind for Wilmington, he said, is the port. “The ports are a very relevant attribute that we’re going to be talking up,” he said. He also highlighted the area’s diverse economy, which includes a strong presence from the energy sector, fintech and banking, logistics, film and more.

White, who said her clientele is also mostly manufacturing-related, also said the port and rail access were among the top attributes her team considers when making site selection recommendations.