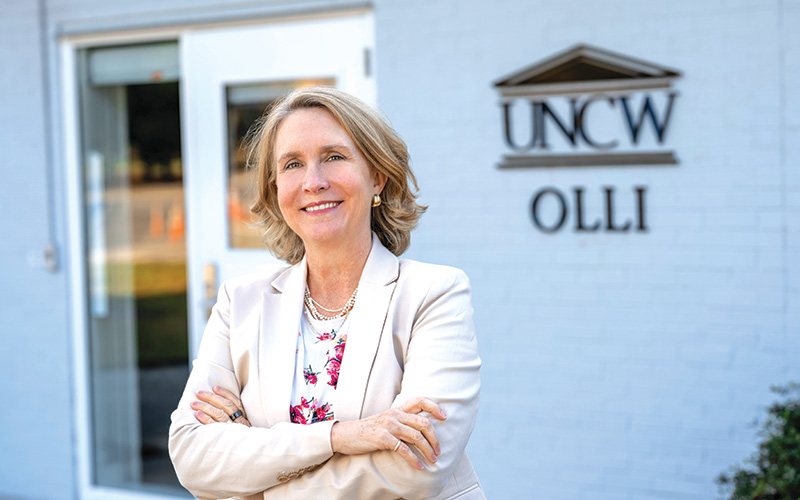 Amy Keith took over this summer as director of UNCW’s Osher Lifelong Learning Institute (OLLI) (Photo by Michael Cline Spencer)
When Amy Keith arrived as a student at University of North Carolina Wilmington in the 1980s, she was on a direct track to a history degree and certification as a high school teacher. She never made it into the classroom, however, at least not in the traditional sense.

“I had planned to teach high school and I got the certification to teach social studies,” Keith said recently from her office at UNCW’s Osher Lifelong Learning Institute (OLLI), where she has been director since August.

“But while doing my undergrad, I had an internship at the Historic Wilmington Foundation,” Keith continued. “This led to a public history path and ultimately to working at the Bellamy Mansion Museum.”

Though the foray into public history kept Keith out of the high school classroom, it opened up broader opportunities. While she was at Bellamy, the antebellum mansion became a museum.

“I was there when we opened the museum, and I was assistant director there,” Keith said. “When my kids were little, I went to more part-time work but always in education.”

That included stints as an ESL instructor at Cape Fear Community College and some substitute teaching, among other ventures.

Keith returned to UNCW in 2009, this time as a program coordinator at OLLI, which focuses on lifelong learning for people 50 and older. She became assistant director, went back to the classroom to earn a master’s degree and took over as director at OLLI this past summer.

While traditional students usually are focused on a career, OLLI is about education for education’s sake, much of it in the humanities, such as history, social sciences and the arts.

“We don’t offer any for-credit classes, so this is really just enrichment,” Keith said. “These are people over age 50, but I would say our average age is probably between 65 and 75.”

A lot of them are retirees, but some are still working.

“We try to have a varied schedule so we can accommodate different needs for taking classes in the day or in the evening,” Keith said.

But there have been hurdles, notably the pandemic, which forced OLLI to move an in-person program entirely to the internet. Prior to the COVID-19 outbreak, OLLI offered no online classes, mainly because the in-person community aspect was – and remains – a highlight of the program.

The pandemic forced OLLI to shut down all its programs in March 2020. Like so many other organizations and businesses, it had to pivot quickly. In April, OLLI began offering classes via Zoom, which would be the community’s sole meeting place for the next year.

As life has gotten back to normal, Keith said some online opportunities will remain – it’s part of our world now, she said – but in-person learning will always be OLLI’s bread and butter.

And COVID came at a cost – one the institute is still paying. A year after the pandemic hit, OLLI’s membership was down 50%. A year and a half later, there are about 1,100 participants.

“That’s about 65% of where we were,” Keith said. “We are still in a regrowth and recovery mode. That is still our main focus.”

Although education for the sake of education doesn’t need to be justified, it does have tangible benefits, Keith said. Benefits in which she adamantly believes.

“I believe in the power of lifelong learning to improve the quality of life for older adults,” she said.

“People finally have time to study something that interested them maybe when they were younger, but they had a different career path or education path or were taking care of family,” Keith said.

“Now they can take that history class or art history, philosophy, you know, something that is really just for pleasure and is keeping their minds active,” she said, adding that it’s usually not in their career field.

With the help of a corps of volunteers and feedback from the community, OLLI creates programming ranging from “the sage on the stage” (think professor/expert) or “the guide on the side” (a facilitator). Some courses are in an actual classroom, but many are in the field.

(In early November, a large group of “OLLIs” was spotted on an architecture tour of downtown Wilmington, complementing the elementary school groups that regularly visit Port City historic sites.)

“Overall there’s a lot of interest in Wilmington as a topic,” Keith said. “A large number – I don’t really know the percentage – of our members are retirees who have moved here from someplace else. And they are very driven to learn the history and the ecology and to go kayaking and get to experience Wilmington.

“I would say that across the board one of our most popular topics is really just getting to know Wilmington but with a learning component,” she added. “Not necessarily where are the great restaurants or where’s a good spot to swim at Wrightsville Beach, but more, you know, what’s the history of this town? What forces shaped Wilmington? How has it changed in the 20th century? 21st century?”

For now, fully recovering from the pandemic is the priority. As the center’s new director, however, Keith also is looking to the future, a future that is expected to see thousands of retirees continue to make the Wilmington area their new home.

“I would like to increase our visibility in the community,” Keith said. “I’d like to expand our reach and be a more inclusive, welcoming organization.”

That is a long-term commitment, she said – to be a place that reaches a broader breadth of the community. That includes not just OLLI programs but also helping its members connect with the many events and opportunities available campuswide.

The latest catalog will be available by mid-December, and Keith said OLLI is especially excited to once again host renowned gospel singer and historian Mary D. Williams on Feb. 9. Williams will explore the music that brought people together during the civil rights movement and how that music supported the struggle for justice and equality.

Campus on the rise