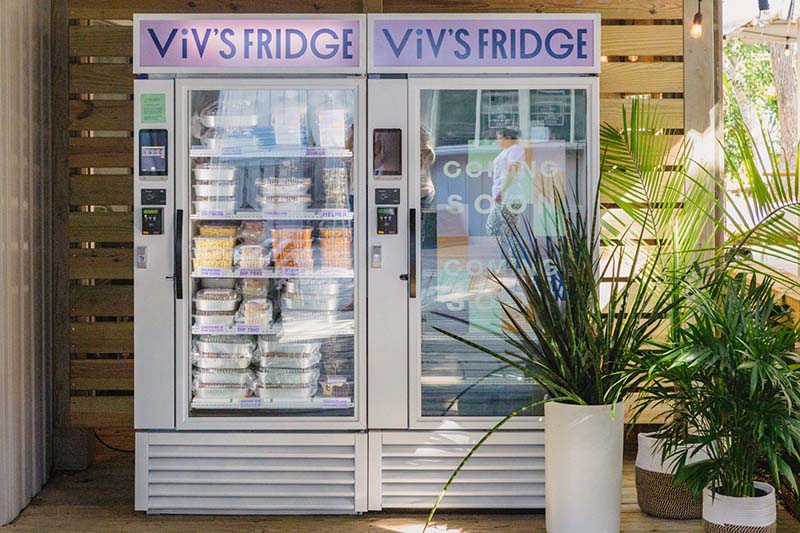 The new Viv's Fridge, a takeout refrigerator by chef Vivian Howard, is located near Noonie Doodle Sweets & Treats and the Maritime Market on Bald Head Island. (Photo courtesy of Viv's Fridge)
Want a good meal but you're too busy or tired to cook? Don't feel like going out to eat? Vivian Howard has a suggestion for you.

Viv’s Fridge operates like a high-tech vending machine: customers swipe their credit card on the side of the machine and the door opens, allowing access to a variety of seasonal prepared dishes and snacks.

The chef and host of “A Chef’s Life” and “Somewhere South” on PBS said the idea of Viv’s Fridge came from her wish not to have to cook or dine out every night while on vacation with her family. It also fits with her expansion preferences.

“I wanted delicious food with less effort and expense,” Howard said in the release. “That’s why the first Viv’s Fridges will be located in North Carolina vacation destinations or along the way to them,” Howard said. “These last few years made me take a hard look at my restaurant operations. I realized my business would be more sustainable if we were less dependent upon the limited number of hours our restaurants are open. As a cuisine-driven restaurant, I wanted to expand our reach without expanding our footprint.”

The Bald Head Island Viv’s Fridge is located outside Noonie Doodle Sweets & Treats at 6 Maritime Way. In Kinston, the unit will be open Friday outside Howard’s restaurant, Chef &The Farmer, 120 W. Gordon St. The Emerald Isle location will follow soon, the release stated.

Howard’s long-term vision for her namesake cooling units involves increasing the number of locations and adding to the inventory with culinary offerings from other notable North Carolina chefs. To learn more, visit vivsfridge.com or facebook.com/VivsFridge/.