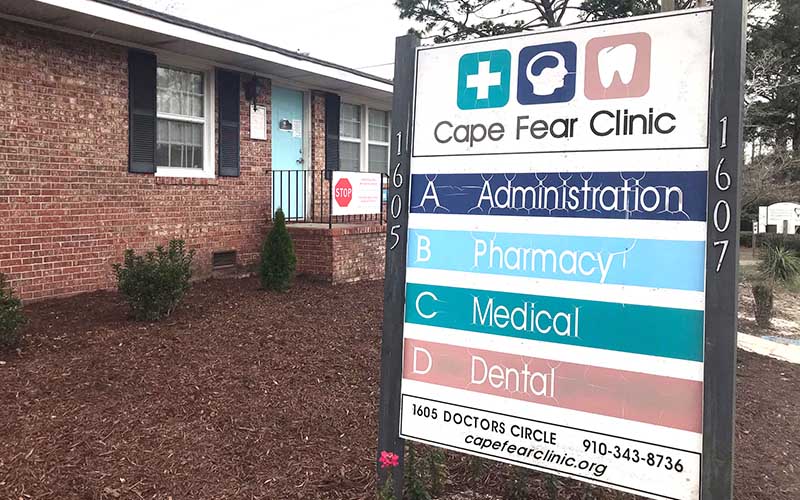 Cape Fear Clinic, a charitable clinic with on-site medical, pharmacy and mental health services, marks its 30th anniversary this year. (Photo by Cece Nunn)
Cape Fear Clinic was already in for an eventful 2021. As with most everything, however, the pandemic meant a change of plans for the medical clinic, which is marking its 30th anniversary this year.

It’s a milestone for the unique provider, founded in 1991 through the efforts of three physicians who were members of St. Mary Catholic Church. In its early years, the then-Tileston Health Clinic operated out of the namesake former public-school building, which was owned by the church. In 2007, the clinic moved to 1605 Doctors Circle (near New Hanover Regional Medical Center), and in 2011 it became Cape Fear Clinic.

“A lot of our [anniversary] plans were derailed because of COVID,” said John Devaney, the clinic’s CEO, adding that all the events were important fundraisers. The 501(c)(3) nonprofit organization is funded by foundations, grants and individuals, along with reimbursements from Medicaid.

“Hopefully, as we go into the fall, things will be better, and we’ll be able to hold some celebratory events,” he said.

As it prepared to mark 30 years of already-ambitious service, COVID-19 abruptly presented the clinic with its biggest challenge ever: providing uninterrupted care for 2,000 patients, the majority of whom have chronic health conditions that make them especially vulnerable to the virus.

In the early days of the pandemic, as much of Wilmington essentially was shutting down, the clinic’s leadership knew it had to stay open.

Closing was “out of the question,” Devaney said. “We are the bottom of the safety net for our community. And so if we were not here for our patients, their only option would be the emergency departments.”

(Many EDs were strained by preparing for COVID patients and the need to maintain social-distancing for others.)

“Our goal, at the truest level, is to keep our patients out of the emergency rooms,” Devaney said.

Prior to the pandemic, the clinic occasionally used phone calls to check on patients. But, as with many healthcare providers, advanced telemedicine was new territory. With the help of the N.C. Association of Free & Charitable Clinics, Cape Fear added Updox, a HIPPA-approved platform that provides secure communication with patients via texting and video chats over phones and other devices.

Since the clinic serves only those with low incomes (no more than 200% of the Federal Poverty Guidelines for a household) or Medicaid coverage, its patients are by definition near the bottom rung of the socioeconomic ladder. No one pays more than a suggested $3 copay.

With 20 staff members – about 14 full time – Cape Fear Clinic is not a large organization, especially considering that a good portion are devoted to work such as grant applications, fundraising and securing donations of medications from drug companies. (Last year alone, the clinic distributed almost $7 million worth of medications donated from drug manufacturers.)

Despite its modest size, Devaney said the clinic has been aggressive in pursuing the medical resources it needs to serve not only its existing patients, but the community in general. Cape Fear Clinic, for example, is one of only a handful of healthcare providers in Wilmington to offer REGEN-COV, the COVID-19 antibody therapy made by Regeneron Pharmaceuticals and administered to President Trump after he contracted the virus in October.

“Our chief medical officer and our chief pharmacy officer were frustrated because we had a couple of patients who died [of COVID-19],” Devaney said. “Our belief was that had we been able to get them the infusion therapy, they might have survived.”

So how did a smallish clinic get its hands on such cutting-edge therapy? Devaney explains.

“We reached out to the state, which controls that just like they control the vaccines, and said, ‘Hey, can we have it?’ And they said, ‘No.’ We said, ‘OK, thanks. We tried.’ And a couple of weeks later, they called and asked if we were still interested.”

Devaney said there has been a big push for people to get the therapy, which, he believes, “is completely underutilized right now, not just in North Carolina, but across the country.”

The clinic also is playing a role in the region’s COVID-vaccination efforts, administering 100 doses a week. As with all its COVID-related treatment, the clinic’s antibody therapy is available to anyone, not just established patients or those who qualify financially for its services.

Like probably many other area agencies with similar missions, Cape Fear Clinic’s leaders are excited about the possible impact of the New Hanover Community Endowment, the $1.25 billion charitable foundation established with the majority of the proceeds from the sale of NHRMC to Novant Health. (Officials have said no grants likely are to be made this year, as the foundation develops a framework for how they will be made).

“Our hope is that they will recognize the value that our clinic has brought to our community for 30 years and hopefully for the next 30- plus years,” Devaney said. “We certainly would fit any of their criteria – we’re health care, we’re serving the low-income and the uninsured, and we’re serving four area counties.”

Thermo Fisher announces it will buy PPD for $17.4B

WSJ reports that PPD in talks to sell

Eckel, Thompson named to Novant board