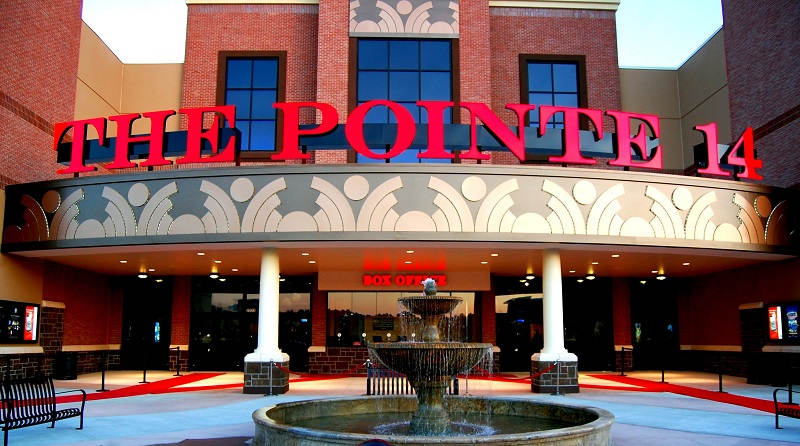 The Pointe 14 theater in Wilmington is holding off reopening plans until mid-November. (Photo courtesy of Stone Theaters)
As some movie theaters across the state prepare to reopen following six months of closure, at least one area cinema is holding off for now.

Others, however, are looking to open soon, such as Thalian Hall in downtown Wilmington.

​Stone Theatres, a small family-owned regional theater chain, has four locations in North Carolina, including The Pointe 14 in Wilmington, and two locations in South Carolina, which had already granted theaters the go-ahead to open.

In North Carolina, Gov. Roy Cooper announced Wednesday that movie theaters, as well as conference centers, across the state could reopen indoor space at 30% capacity, or 100 guests, whichever is less. The announcement came along with the easing of other statewide restrictions aimed at slowing the spread of the coronavirus.

Stone Theatres' decision to wait, however, was strictly a financial one, based on what the firm experienced in the time it had theaters open and running in South Carolina.

When the chain opened its two South Carolina locations in August, it wanted to take advantage of the 2020 release of Warner Bros. action film Tenet and the planned release of Disney's Mulan, which didn't make it to national theaters.

"What we found that with complying with all of our requirements of the CDC and local and state health officials, our labor costs were certainly a bit higher in order to accomplish all of the things in the guidelines we need to comply with," Coleman said.  "And what we found was that in our ... revenues and basic cost of sales, it did not make financial sense for us to reopen our theaters until we have some really good meaningful films on the release schedule."

The theaters in South Carolina closed again in late September, and the company has made the decision across its group of cinemas to remain temporarily closed until sometime in November when hopefully some big films hit the box office.

"So we were open 24 days. And we made a business decision on what our actual results and attendance that we were getting in those two locations. The revenues are not what we had hoped for," Coleman said.

Coleman said it's not something strictly related to Stone Theatres; it's an industry-wide situation. He said there is a lack of "meaningful film product until November" and that some theaters are even curtailing their schedules or going as far as closing certain days or running weekends-only.

Regal Theatres announced it was opening in some select cities, with a wide range of new health and safety measures based on CDC guidelines. As of Wednesday afternoon, The Regal Mayfaire & IMAX website stated it was open and offered a list of movies and showtimes at its location at 900 Town Center Drive at Mayfaire Town Center.

Thalian Hall is also planning to open its Cinematique Series with the movie The Trip to Greece, with showtimes beginning Monday.

When the theater closed in March, it immediately began planning for its reopening, said Zach Peschl, IT, graphic and web designer for the downtown Wilmington theater.

"We've been working on this plan of how to do it since day one, basically. We found out right after the governor's announcement and we just jumped into planning and getting everything in motion," Peschl said.

The theater has reserved seating online, with select open seats in groups to keep social distancing. Theaters are also being cleaned and sanitized continuously after shows, he said.

Following the first three-movie series, there are others in the works, he said. And the theater is still waiting on some clarification on whether or not it could bring back artists for live performances on stage.

“We are very happy to be finally open and hopefully we'll be able to do some new things as well on top of just kind of returning to movies, because we were hoping that we would be able to perform inside, and right now it looks like we can't but we're still waiting on clarification,” he said. “If we can’t we’re working on some new things that haven’t been done … here.”

2020 in review: A look at the pandemic's impact

A shot of hope for area hospitals: 'We have vaccine in-house'