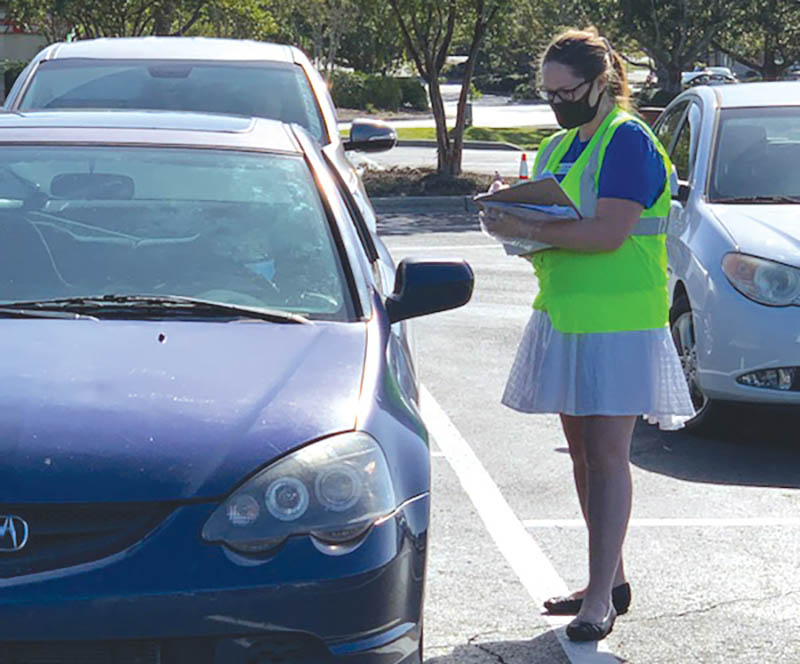 Sierra Briney, staffing coordinator with On Target Staffing, helps a participant during a recent drive-thru hiring event. (Photo c/o On Target Staffing)
Hiring trends across the region are picking up, but at a slow pace, said Adam Jones, a regional economist with the University of North Carolina Wilmington.

There are still constraints for businesses, however, that are impacting the overall recovery.

“I expect we’ll con­tinue to see employment growth across the board but stronger in areas that ‘normalize’ more quickly,” Jones said. “For example, as we get better at treating COVID and the medical sector normalizes, we’ll see more demand for nurses, doctors, etc., be­cause regular visits will resume and the backlog of nagging problems that haven’t been addressed in six months will have to be handled.”

Statewide measures to slow the spread of the coronavirus are keep­ing many businesses from operating at full capacity or operating at all. Some firms, however, are opening and hiring, as the restrictions lift in phases. But many are still adapting to the new COVID-19 business climate.

Across the board in the Cape Fear region, unemployment figures have slowly started to trend down, but percentages are still above 2019 counts. New Hanover County, for example, reached a high this year at 15% in April, compared to 3.3% last April. The unemployment rate slowly started to reduce in the fol­lowing months before trending up slightly from 7.6% in June to 8.4% in July. August figures at the county level were not released as of press time.

One sector in New Hanover County hit hard by the job loss sit­uation is the leisure and hospitality industries, Jones said.

Jones said those industries made some strides in employment recov­ery in May and June, but smaller increments of recovery happened between June and July.

“There are two reasons for the slowing: the initial reopenings brought back a large number of jobs, and by July, the seasonal effects of tourist season were in full effect. Summer businesses do their hiring before the peak season. That said, we are still about 7,000 leisure and hospitality jobs below where we were last year in the summer peak,” Jones said, adding that those jobs are likely to be slower coming back because of capacity limits as well as the fact that consumers are still minimizing their exposure to some extent.

“Capacity constraints and com­fort levels will normalize with time, but it’s likely to be a slower process going forward, unless there is a major breakthrough on the public health front such as a vaccine or readily available therapeutic,” he said.

Jones also expects gains in the construction industry, especially in the area of home improvement work, he said. “As employees begin to work from the office again, the demand for construction and renovation projects are likely to increase,” Jones said.

Construction jobs were some of many involved in a drive-thru hiring event in September.

A national retailer also announced a round of local jobs for a location soon to open at Independence Mall. Dick’s Sporting Goods plans to hire 20 part-time positions and 20 temporary positions for the new mall location expected to open in October, a news release stated.

There are also trends on the side of job seekers, some of whom are searching for a change in their line of work due to the crisis, Easton said.

“We really have to analyze and see what [employers] need to offer so that they can get some of these folks in,” Easton said. “People are having to change industries. As we know the hospitality industry is huge here … and most of our job losses have come from that. So, these folks now need to figure out what they can do. There are people available to work and we need to help [businesses] find those people.”

2020 in review: A look at the pandemic's impact

A shot of hope for area hospitals: 'We have vaccine in-house'