Safety Net: How The PPP Is Affecting Some Businesses 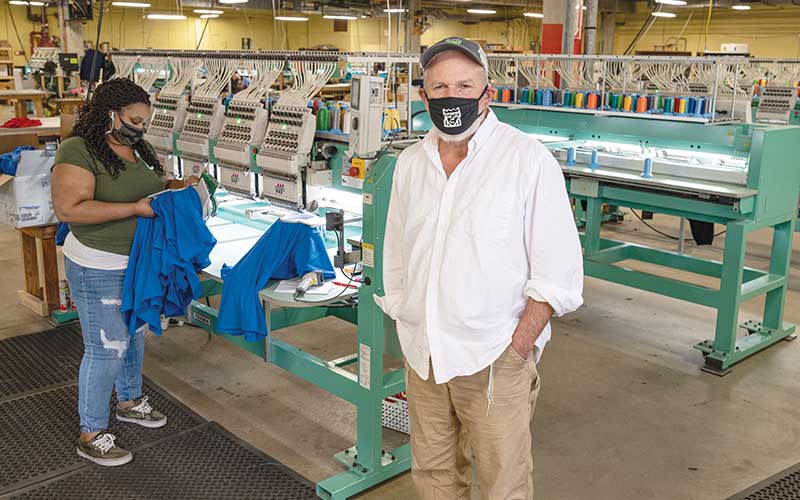 The SBA’s Paycheck Protection Program has helped in The Queensboro Shirt Co.’s efforts to retain employees, like Teresa Thomas (at left). Also shown is Fred Meyers, president and founder of Queensboro. (Photo by Michael Cline Spencer)

Within three days of applying in January, Wilmington-based company Queensboro received its second round of coronavirus relief funds from the SBA’s Paycheck Protection Program.

The announcement by the federal gov­ernment late last year to reopen the U.S. Small Business Administration’s PPP loans couldn’t have come at a better time for The Queensboro Shirt Co., a custom embroi­dery and printed apparel business, and its online business Queensboro.com.

The move allowed Fred Meyers, founder and president of the company, to solidify plans to keep the 80-employee workforce on board for 2021, he said.

“If this loan did not come through, we would be thinking a lot differently about what to do now,” Meyers said, adding that it kept the company from having to reduce its workforce by as much as 50%.

“I’ve been in business for 40 years now. And it was the first time I felt like ‘Wow, the government really helped me here,’” Meyers said.

Queensboro’s loan was part of the more than 5,300 loans made in North Carolina in the PPP’s latest round, according to SBA’s PPP loan data as of Jan. 24.

That same data showed nearly 400,600 PPP loans were approved this year across the nation, worth more than $35 billion, since the latest round opened in January. In total, the PPP has supported business­es nationally through 5.5 million loans, worth more than $557.8 billion, in both rounds since last year when the COVID-19 pandemic began impacting the economy.

Raleigh-based Dogwood State Bank, which has a Wilmington branch, has processed about 11% of the loans in the state, said Mark Johnson, Dogwood’s Wilmington market executive.

Companywide, as of Feb. 1, Dogwood has processed half of its roughly 500 loan applications in the second round, resulting in about $52 million in approved loans, Johnson said. That funding “equates to capital in the hands of our local businesses so they can get through this trying pandemic and continue to prosper,” he said.

Things are going much more smoothly for both lenders and borrowers this time around, Johnson said.

Queensboro worked with Dogwood for its PPP loans, and while the process was a little cumbersome in its first draw, Meyers said he didn’t run into the same issues in the company’s second draw.

Johnson said Queensboro was the first approved for the 2021 PPP loan process at Dogwood State.

“Dogwood learned a lot from the first round, and they were just so ready for this. And I feel like we were first in line,” Meyers said. “We applied, we were funded and it was an incredibly smooth process with them.”

“The SBA has changed its process a little bit … it’s become much more efficient,” Johnson said.

Many smaller businesses were left behind in the first round, said Jerry Coleman, director of Cape Fear Community College’s Small Business Center.

“We had a handful of SBC clients, not many, who managed to secure a PPP loan during the first round of funding. There was a great deal of confusion with the first rollout with a limited number of lenders participating, poor application guidance and the majority of funding going to larger wealthy organizations or large chains. As a result, the funds were quickly allocated within a few weeks, thus making it nearly impossible for our small businesses (sole proprietors, mom-and-pop organizations) to get needed assistance.”

He said the SBC has had more clients receive assistance over the course of the program as more funding, more lenders and improved program guidance has become available.

Officials with Wilmington-based Live Oak Bank, another lender assisting small businesses in the application and loan process in the nation, also noted that things have been going smooth in the latest round. The bank played a role in helping the federal government develop the program in 2020.

In the first round, the company processed more than 11,000 loans across the U.S. – with more than 740 loans in Wilmington – dispersing more than $1.75 billion.

Live Oak Bank is currently processing about 3,000 so far in the second round, according to the company.

“We saw an initial influx of interest when the program reopened, and that has tapered off, as it seems borrowers are not in the same rush to get PPP funding as they were in the first round,” said Claire Parker, spokeswoman for Live Oak Bank, adding that the bank is preparing for a potential uptick.

“Overall, we believe this is a strong program for small business owners who need capital to keep their workforce on the payroll, and we are dedicated to helping them get the funding they need,” she said.

The SBA is accepting applications for first- and second-draw loans until March 31. Generally, a borrower is eligible for another draw if he or she received a loan in the first round and used the full amount; has no more than 300 employees; and can demonstrate at least a 25% reduction in gross receipts between comparable quarters in 2019 and 2020, according to the SBA.

At least $15 billion is set aside for first draw, and $25 billion for the second draw, for businesses with a maximum of 10 employees, or for loans of $250,000 or less to businesses in low- or moderate-income neighborhoods. The SBA is also offering loan forgiveness for businesses that meet certain criteria.

Businesses can use the funds for a range of costs, including payroll and benefits, mortgage interest, rent and utilities.

“These are certainly challenging times, and the PPP is a valuable tool small business owners can take advantage of,” Parker said.

Some businesses, however, may not qualify, Parker said, adding that’s why Live Oak teams are providing customers with guidance and other options that are available.

Another local business, Intracoastal Realty, also applied for and received a PPP loan in the first round. But the firm has decided not to go after a second loan, said Trey Wallace, president of the real estate firm.

“There was a large amount of uncertainly at the beginning of the pandemic about the economy. We saw a 65% decrease marketwide in showing activity in the first four weeks of the shutdown, and that is a frightening thing to see in the real estate business,” Wallace said. “Showing activity correlates directly with future contracts and closings (revenue).”

Intracoastal, which was in a loan range of $350,000 to $1 million, wasn’t the only real estate firm to receive funds in the first round.

Other real estate firms, both residential and commercial, in the Wilmington area also received approval for loans.

Intracoastal Realty used its loan to pay staff and keep everyone employed during the crisis, Wallace said.

“I am proud to say that we did not lay off any of our staff even though many other real estate firms around the country were doing so. I know of a firm larger than ours in the Triad area that laid off a third of its workforce,” Wallace said.

“We won’t be applying for a second round,” he added. “I think that money is better used for businesses that are still under tight restrictions like restaurants, bars, gyms, etc.”

At the start of the shutdown in March, Queensboro had to let go of 90% of its staff, while keeping a small portion of the business going, Meyers said. That staff was recovered over the course of 2020.

Although Meyers declined to disclose the amount his company received in the first or second draws, he said Queensboro is using the funds to pay employees. In the first draw, SBA records show, Queensboro received a loan in the $350,000 to $1 million range.

“The first round was a huge help. There was so much uncertainty going on. It was an emotional lifeline as much as a financial lifeline. Our business had been really impacted by the shutdowns after March, and I didn’t know what all it was going to look like,” Meyers said.

“We have definitely seen some softening in the business … we’re hoping things will pick up again. But it’s just so unpredictable, what’s going to happen,” he added. “As an entrepreneur, you’re kind of optimistic by nature. I am optimistic by nature, so I’m hopeful it’s going to be a great year. But I can’t make any commitments investment-wise at this point until we get a better sense of where it’s really going to go.”

Checking in on area unemployment

One Year Later, Is The Worst Over?