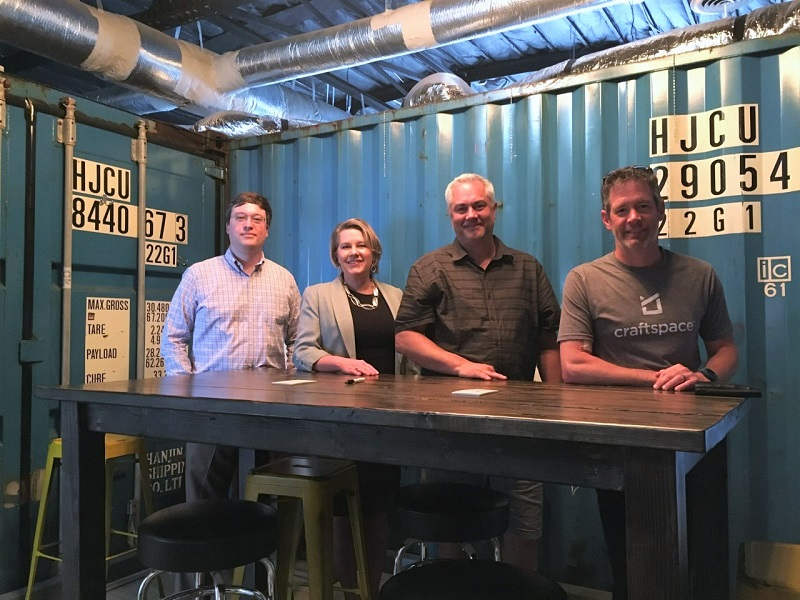 Craftspace officials gather with WDI leaders at the company's facility off Queen Street. (Photo by Jenny Callison)
A company that repurposes shipping containers is the recipient of Downtown Wilmington Inc.’s first microloan.

The $20,000, five-year loan will enable Craftspace to obtain modular building certification and purchase equipment that can move the units around in its manufacturing facility, according to chief operating officer Gregg Howell. The funds will be used in addition to the $50,000-plus the company hopes to raise through its current crowd-funding campaign.

“The money will be used for operations and infrastructure, meaning a lot of equipment,” CEO Bryan Kristof said Tuesday.

To keep costs down, making their units as affordable as possible, the Craftspace team is trying to minimize their use of subcontractors, doing much of the conversion work themselves.

Instead of providing a few loans of about $100,000 each to downtown developers, the organization is tapping its fund of about $568,000 in federal block grant money to make as many as 30 $20,000 loans directly to business owners who are just getting started or need funds to recover from the pandemic. As loans are repaid, the money will be available for loans to other businesses.

“We have very flexible terms: the interest rate is three-quarters of prime, which right now is 2.44%. And there’s no payment for the first six months of the loan,” Childs said Tuesday. “So the loans are a bridge and a boost.”

WDI’s microloan partner is Raleigh-based Civic Federal Credit Union, which receives the one-page applications and does all the underwriting and loan decision work, she added.

Craftspace, launched in January 2020, is an ideal loan recipient in Childs’ view. It's a manufacturer and its principals already have a track record – Kristof and Howell were turning shipping containers into small homes and offices for several years before forming their enterprise – and they have plans and clients.

The company also is located in not one but two downtown districts, so publicity surrounding its loan reinforces an expanded concept of downtown, Childs said.

Craftspace’s manufacturing facility has grown to occupy about 14,000 square feet inside the former Coca-Cola Bottling Plant in what is now known as Wilmington’s Soda Pop District, and its office is in the Cargo District’s co-working space at 1608 Queen St.

In fact, Kristof and Howell renovated the old shipping containers in the Cargo District complex.

Childs credits Dane Scalise, WDI’s chairman, with leading the organization to refocus on economic growth and development. The shift to microloans was part of that, as is the expansion of WDI’s definition of downtown to include much more than the central business district.

“My goal was to get WDI back to basics [of promoting economic growth and development],” Scalise said Tuesday. “Mobilizing this loan fund . . . that’s in our bailiwick. We want to make downtown more economically feasible and viable for everyone.”

For more information on the microloan program, email [email protected].

The growth Wilmington-headquartered PPD Inc. has experienced in the Port City is an economic driver for the region, local economic developme...