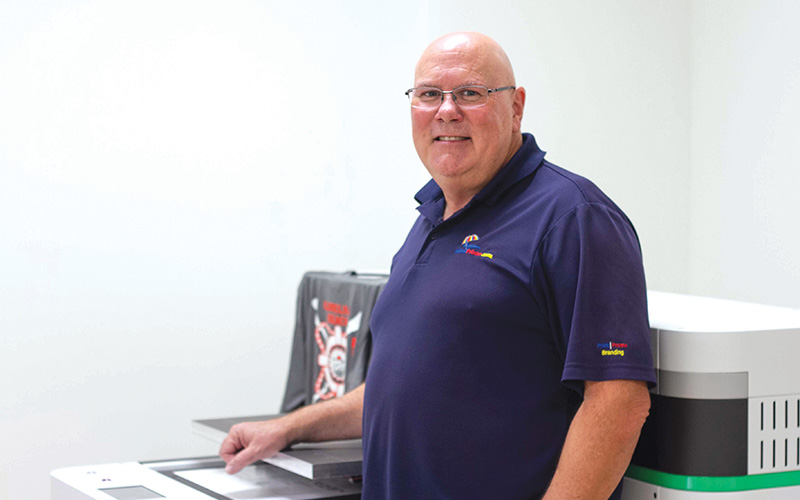 Carlton Brown stands in front of new state-of-the-art print equipment he purchased as part of Island Print & Promo’s expansion, enabling the company to offer new and improved promotional materials. (Photo by Johanna F. Still)
Serial entrepreneur Carlton Brown ran a print company out of his Carolina Beach condominium for years without knowing how to turn on a copy machine.

“I know nothing about the print business,” he said.

Brown started what is now Island Print & Promo as an online-only store in 2016 and programmed the website himself, initially intended as a hobby business for his sisters to run. He had been in retirement for two years, having settled at the beach and was immersed in volunteer efforts after a career of entrepreneurial startups and investments.

His sisters ended up having no interest in the venture, so Brown decided to run it for himself. The website netted a $9 sale in the first 48 hours online, he said. “When I finally made $100 in one month, I thought I had arrived.”

Eventually, the website, islandprinter.com, was luring national orders that Brown would then coordinate with wholesalers to fill. “I never even saw the products – never even touched them,” he said. “What a great life it was.”

When COVID-19 arrived stateside, Brown made a preemptive bet, believing he ought to start a brick-and-mortar location while anticipating his competitors would soon make moves to close storefronts. “I thought, ‘I need to do exactly the opposite of what they’re doing,’” he said.

He recruited a manager from Staples who told him the company was about to lay her off, bought printing equipment, and against the advice of his Realtor given the uncertain economic conditions, rented out a storefront on North Lake Park Boulevard. It was March 2020, and on the Monday he was hoping to open, he said he was informed by the fire department it couldn’t issue any certificates of occupancy, per state orders. “I’d spent hundreds of thousands of dollars of my own money,” he said.

Though the physical retail portion of the business was closed that spring, Brown and an employee were able to coordinate pick-ups and fulfill orders from the store. Brown himself was the delivery driver in the beginning stages of the business, he said. When the town fire chief asked Brown if he could produce uniforms for the fire and rescue squad because their usual vendor was shut down, Brown gave him a quote. “Now the whole island comes to us,” he said.

In May 2020, while storefronts were still closed, Brown opted to buy Snapdragon Screen Printing, a local downtown business that had been around since the ’80s. That acquisition helped corral more national clientele for Brown. “These are people that buy $20,000 to $30,000 orders in one stop,” he said. “And nobody would believe a little beach store in Carolina Beach does that.”

As business continued to pick up, Brown leased a former restaurant space in a shopping center on Shipyard Boulevard, splitting it in half (Kind Cultures occupies the other side for its plant-based production facility). He gutted the interior, ordered a couple of plastic palm trees online and redid the floors to emulate sand. Since opening in October, Brown has finally mastered how to turn on a copier and has even flown out to get trained by the factories that manufacture his costly machines.

“There’s only three in North Carolina, and they’re in UPS stores,” he said referencing one model he acquired to better compete with national and well-known copy and print brands.

Now, he said the companies that produce the machines are asking him for tips. Instead of printing a design on one koozie at a time as recommended, Brown fabricated a makeshift design so a machine could print 48 in one sitting. “I had to do them one at a time, and that was after the factory told me I couldn’t do [more], and that’s probably the worst thing to tell me, is that I can’t do something,” he said. “I found a way to do it.”

Brown’s entrepreneurial path was cemented at an early age, after watching his parents run family businesses. His first whiff of success came before kindergarten after selling gum to neighborhood children. After his first day of school, when his mother asked how it went, he told her: “We’re going to need more bubble gum.”

After high school, he joined the Army to avoid college, his mother’s ultimatum. “I thought, ‘More school? That’s stupid. More school? I want to make money. I want to do stuff,’” he said.

By the age of 25, he had founded his own heating and air business, Raleigh Air, and began acquiring others to expand the brand. He sold it to a conglomerate after 10 years and later got into real estate, purchasing a RE/MAX franchise in Raleigh. 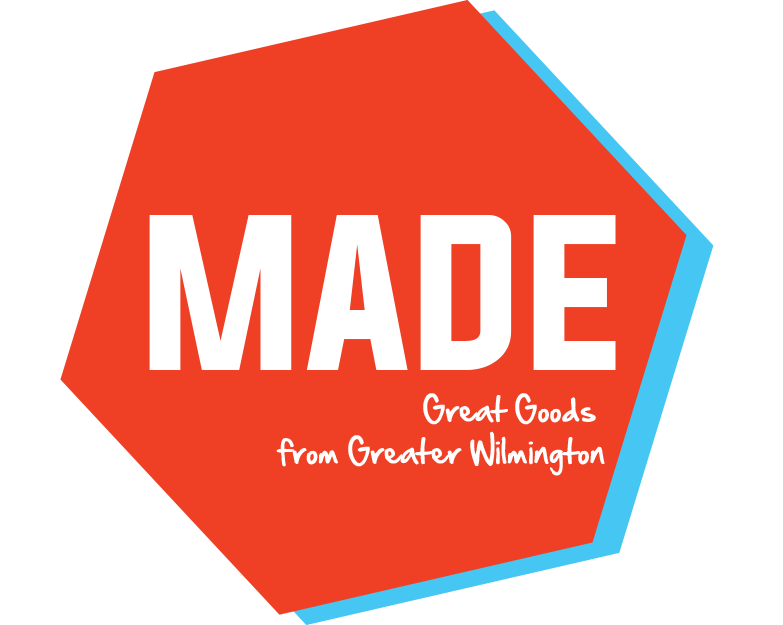 Company description: Island Print & Promo sells and prints promotional material to a variety of clientele – from a local church needing a few yard signs for an event to a Fortune 500 company needing thousands of sweatshirts for its employees. Brown started the firm in 2016 as an online-only company, but during the pandemic, he opened a brick-and-mortar in Carolina Beach. This year, he opened his second retail store off Shipyard Boulevard and has plans to continue replicating the business model.

Products made locally: The shop can print and create a variety of products, from stickers to window decals to koozies. After investing in state-of-the-art print equipment this year, Brown expanded the shop’s abilities to offer promotional services on a more varied range of materials.

Product distribution: A majority of the clientele is local, Brown said, but the online store attracts inquiries from across the nation. “I’ve got a 1,900-shirt order being processed now for a company in Massachusetts,” he said.

What made the company decide to make its goods locally? After founding and investing in several businesses throughout his entrepreneurial career, Brown decided to retire in 2014 at the beach. “I didn’t stay retired very long at all,” he said.

What’s your target market? Brown said his primary targets are trade organizations, such as plumbers or electricians. “I’m looking for people who need us all year long,” he said. He added, “but I’ll take them all, don’t get me wrong; if the money’s green, I’m good.”

What’s planned next? By next summer, Brown said he hopes to have a new production facility up and running where he will transform Snapdragon Screen Printing, a local business he recently acquired, into a wholesale company. “I might find another location and build from the bottom up,” he said. He also plans to invest in larger machinery for the new production facility.

Pace of new business creations in region remained steady in 2022