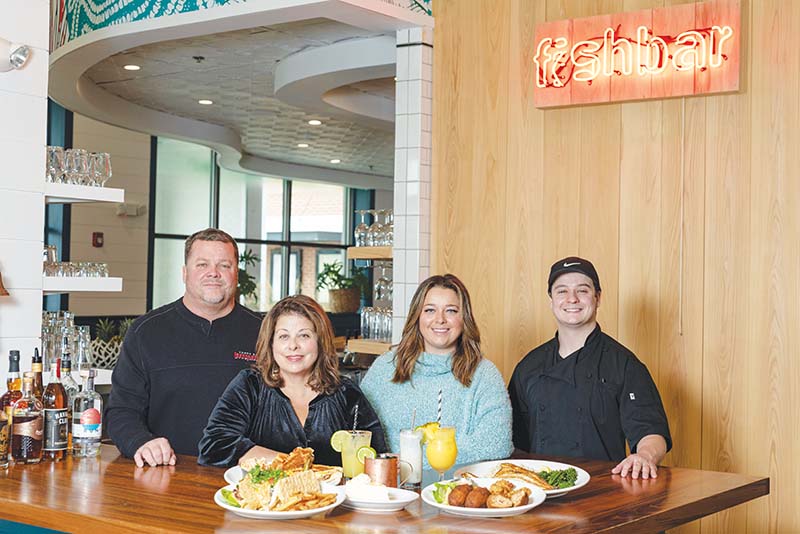 Scott and Shari Clemons (from left) with their daughter and son Emme and Jacob Clemons recently opened Coquina Fishbar at Mayfaire Town Center. (Photo by Michael Cline Spencer)
For the Clemons family, running a good restaurant centers around simplicity – providing fresh, affordable, tasty food that is served well. It’s a philosophy that led to the success of their three Hibachi To Go restaurants, and they are now applying it to their new restaurant, Coquina Fishbar at Mayfaire Town Center.

He should know. Scott Clemons has been in the restaurant business for most of his professional life. He started out as an apprentice chef in Tampa, his hometown, and worked his way up to chef of a five-star hotel.

The Clemonses moved to Wilmington in 2006 and opened their first Hibachi To Go restaurant in Hampstead in 2010. There, they turned a former hot dog stand into a thriving restaurant that catered to the carry- out crowd. It was so successful, the family opened a second Hibachi To Go in Ogden in 2011 and a third on South Kerr Avenue in 2017.

Ever one to set new challenges for himself, Scott Clemons then came up with the idea for a different type of seafood restaurant for the area.

“We wanted to offer Wilmington another affordable, good, year-round seafood option, especially for our locals,” Clemons said. “As our population grows, so has the demand for more seafood restaurants, and we thought we could fill that need.”

To make the dream a reality, the Clemons family pulled together. Daughter Emme, who co-owns the restaurant, also took on the role of front-of-house manager. Emme, with her mother, Shari, redesigned the restaurant.

Although Scott Clemons likes to cook, he hired Ben Ramsey as chef and turned his attention to overseeing the restaurant and ensuring it runs efficiently. Meanwhile, the Clemonses’ son, Jacob, took over management of the Hibachi To Go restaurants.

The result is Coquina Fishbar, a restaurant at 890 Town Center Drive that offers an innovative take on seafood. While diners will find plenty of traditional favorites, including fresh fish, locally farmed oysters and sides such as corn on the cob and Yukon mashed potatoes, Scott Clemons wanted to introduce the area to some of his Tampa favorites. Thus, customers can also enjoy dishes that have a Latin flair, such as conch fritters; deviled crab flavored with spicy breading and hot sauce; smoked mullet spread; and saffron yellow rice with black beans.

The restaurant’s smoker, used to smoke meat as well as seafood, is another way the restaurant gives new taste sensations to familiar dishes.

The large, open restaurant hosts a spacious dining room for families and friends, outdoor dining, a cocktail lounge where people can relax with a signature drink such as a Co-jito 10 or Cucumber Cooler and a conch fritter, a bar where they can grab a beer, and a dining room for private parties.

“I like to serve the workingman at lunch who wants a flounder sandwich all the way to those who get dressed up for a nice dinner with family and friends,” Scott Clemons said. “I want the restaurant to appeal to, and be affordable to, all walks of people who want to dine out.”

Coquina Fishbar opened Jan. 11, but getting to that point had its challenges – all of which were exacerbated by the pandemic. Fortunately, the Clemonses had built strong relationships with their subcontractors and vendors over the years, and they worked with the family to overcome the problems that arose, Scott Clemons said. Also, their Hibachi To Go restaurants have been busier than ever during the pandemic, which provided a safety net.

Scott Clemons said he reached a point where he just had to forge ahead and open, pandemic or no pandemic. Meeting COVID safety guidelines has not been an issue as the restaurant’s big, airy rooms make it possible to seat customers a safe distance from each other, or they can eat on the restaurant’s side porch. The Clemons family is also working with Mayfaire to provide curb-side service.

Another factor that Scott Clemons is counting on is the restaurant’s Mayfaire location. With Landfall across the street and the Arboretum West apartment complex and townhouses behind the mall, the area is surrounded by residences.

To ensure the restaurant’s success, the Clemons family plans to apply the same high-quality standards to Coquina Fishbar as they do to their Hibachi To Go restaurants. To make sure they are on the right track, the Clemonses listen to their customers. Scott Clemons even invites diners to give him a call when something is not to their liking.

“I give my number to customers and tell them to call me direct, to help me help my restaurant,” he said. “We can talk about the problem and see if we can do something to improve.”

In the short time Coquina Fishbar has been open, business has been good, according to Scott Clemons.

“We had a soft opening,” he said. “That gives us time to work things out. We want to get everything right and give our customers good service. That’s important to us.”

CAM Café to reopen this week

On the Carolina Beach Boardwalk: A smorgasbord of restaurant options

When the owners of Blue Surf Café decided to expand to another location, they wanted it to reflect an evolution into a more full-service res...