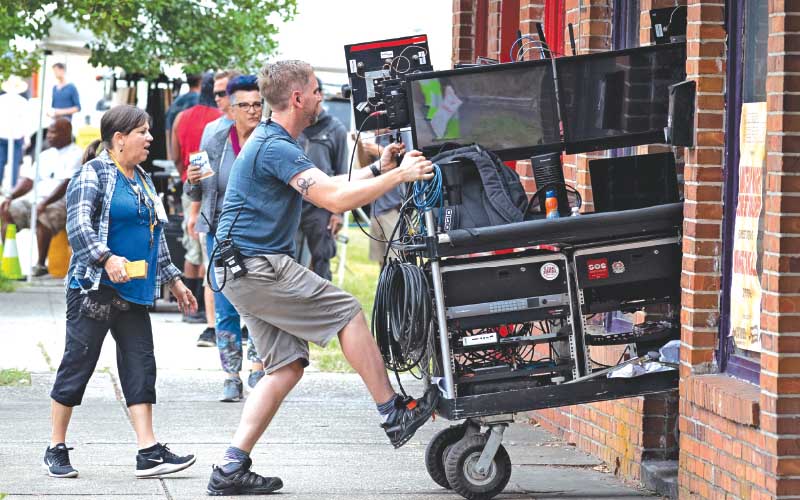 The Wilmington area had five productions shoot in 2019. (File photo)

Wilmington-area film and TV productions contributed nearly $137 million last year in direct spending in the state, according to officials with the N.C. Department of Commerce.

Overall, North Carolina racked up a total of $167 million in direct spending on film projects statewide and 11,820 jobs, according to a news release. It's the most spending by productions in the Wilmington area and the state overall in the past five years.

Two of the five locally shot movie projects -- Halloween Kills and The Georgetown Project -- and a Charlotte-area film, The Eyes of Tammy Faye, all together accounted for more than $56 million of the total and created more than 3,200 jobs, including nearly 500 "well-paying crew positions," according to the release.

Halloween Kills, a film produced by Blumhouse Productions and Universal Pictures, is eligible for a rebate from the state's film grant program of up to $7 million. The film, starring Jamie Lee Curtis, is slated to hit theaters in October.

The Georgetown Project, a movie produced by Miramax and starring Russell Crowe, qualifies for a grant of up to $3.3 million, stated the release.

The two projects wrapped filming in Wilmington in late 2019.

"The North Carolina Film and Entertainment Grant provides financial assistance to attract feature film and television productions that will stimulate economic activity and create jobs in the state. Production companies receive no money up front and must meet direct in-state spending requirements to qualify for grant funds, which are paid out following the completion of the project and a successful audit," stated the release.

The program is run by the N.C. Department of Commerce and promoted by the N.C. Film Office, part of VisitNC and the Economic Development Partnership of North Carolina, according to the release.

The state previously said in June that two other Wilmington productions, Swamp Thing and Uncle Frank, were expected to generate a direct in-state spend of more than $75 million and create more than 1,500 job opportunities in the state.

State officials have also previously said that Hulu's Reprisal, which was also shot in Wilmington, was slated to receive funding for shooting its pilot that was shot in 2018. Reprisal also shot Season 1 of its series in Wilmington last year. The project in June was eligible to receive a rebate of up to $10.7 million and its pilot qualified for $5 million.

“Television and film production saw great activity in North Carolina last year,” said N.C. Film Office director Guy Gaster, in the release. “These high-profile projects filmed at the end of the year have brought added exposure to our state’s film industry and will serve as a great springboard as we move ahead in 2020.”

With new hybrid format, show goes on for Cucalorus Festival