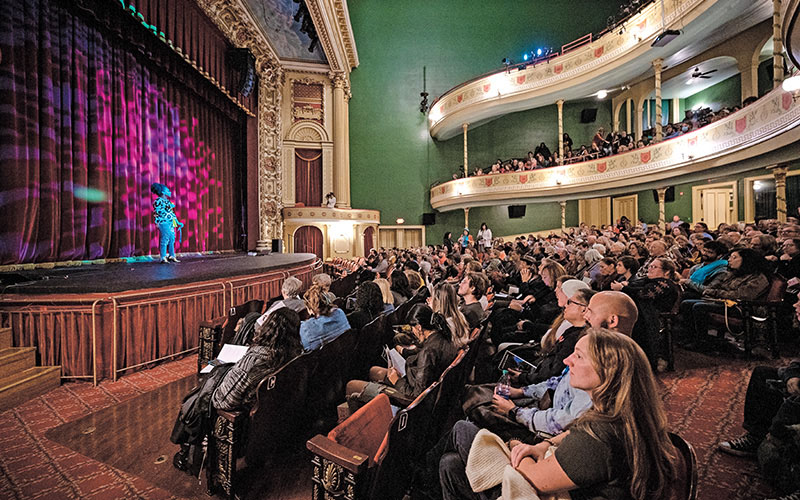 Dance-a-lorus, part of the Cucalorus Film Festival, was viewed in November by a packed house at Thalian Hall. (Photo by Michael Cline Spencer)
Area film festivals took a hit when the COVID pandemic was at its peak, but their organizers expect lessons they learned about the importance of flexibility and fellowship will lead to future success.

“We spent a lot of time in 2020 and 2021 really thinking, taking an introspective look at our values and what matters most to us as an organization,” Morin said. “It was a concerted effort to continue to build community.”

Back in full swing in 2022, Cucalorus returned with full houses of cinephiles and filmmakers.

“It felt so incredible to be back to full-scale operations and celebrate those from our past and new people who have discovered us,” Morin said. “People from all over the world come in to celebrate with us.”

In addition to Cucalorus, Dance-a-lorus has become a traditional part of the festival.

“Dance-a-lorus pushes creative boundaries by pairing filmmakers and choreographers for an exploration of film and dance. This live stage event was presented to a packed house at Thalian Hall,” Morin said.

Similar excitement surrounded the N.C. Black Film Festival following its post-COVID return in 2022. After canceling in 2020, and a virtual 2021 event, organizers said their March 2022 festival was a success.

“I think people were really ready to be out and be involved again, both locally and from outside the area,” said Charlon Turner Everett, the festival’s co-director and vice president of the Black Arts Alliance. “Everyone was just happy to be in public again and see people.”

Each March, the N.C. Black Film Festival partners with local venues to present films including the Wilmington Community Arts Center, Cameron Art Museum, University of North Carolina Wilmington and Jengo’s Playhouse. As the festival grows, Everett plans to add venue stops, including large-scale movie theaters, to show more than one film at a time.

The Uptilt Film Festival, North Carolina’s only female and gender-expansive film festival, attempted a hybrid model for events in 2022, but organizers realized that model does not suit them, and the stories are meant for in-person interactions.

Allowing movie fans to watch films and then discuss their interpretation is especially important for Uptilt’s executive director, Tricia Ireland. She said organizers prefer to offer discussion sessions following the films so fans can share their own stories and foster understanding among the participants.

“It allows a spin on different stories, and [viewers] see them through a lens of their own experience; then they can discuss those messages and become more inclusive and accepting,” Ireland said.

Film can promote change, she said, and being together is necessary for that to happen.

“Part of what we want with these stories we have is for them to be shared and told in a group. That sense of community and collaboration with different views and discussing them afterwards can create change and create positive change,” Ireland said.

The Wilmington Jewish Film Festival, an annual event since 2013, skipped 2020 and held a virtual event in 2021.

“Our demographic which tends to be 60-years-old-plus had a lot of trouble with the platform, but they were supportive and bought tickets and passes, but a lot didn’t access it,” said Debbie Smith, chair of the volunteer-run festival.

This spring, the film festival was held in person, but some films were “better attended than others,” Smith said.

During the summer “we were getting better as far as attendance starting to come back,” Smith said. “We definitely turned a corner. People seemed done with COVID.”

Smith said over time, the festival’s film committee has found a “sweet spot” of six or seven films over a two-week period at Thalian Hall in the spring. The Wilmington Jewish Film Festival Summer Series takes place at The Pointe 14 Cinemas.

Moving forward, film festival officials agree there were many lessons learned and aspects appreciated throughout the pandemic. Most involve making the most of being in a group setting and learning from one another.

In 2023, the organizers of the N.C. Black Film Festival plan to include more opportunities for interaction between the guests and the organizers and filmmakers.

“We plan to have our Cine-Mixer for our opening to involve and evolve for our sponsors. We want to add a show or music, so it is more than just a reception and a movie,” Everett said.
For the Uptilt Film Festival, “the big lesson is we have to have flexibility and have to shift according to what’s happening in the world,” Ireland said.

Over the past couple of years, the Wilmington Jewish Film Festival has focused on supporting educational opportunities for area students. The organization pays for buses, the venue and substitute teachers to allow teachers to bring their classes to see Holocaust films.

“It was really terrific, and it has really grown as we have gotten a lot of support from schools to make this happen. We try to make it as easy as possible for teachers to say, ‘yes,’” Smith said.

Cucalorus officials continue to strive for more of what they have already been doing.

“Where we have had massive success is how we shifted and changed the way we report numbers. It is less about specific numbers of films or people in the room, but more about the amount of money we directly pay to artists every year,” Morin said. “We reached gender parity in 2016 and committed to 50% artists of color in 2020, and those are the things we’re really proud of. I think we’re starting to appreciate this era of growth and discovery and creativity. The way we measure success and what we care about will not shift in 2023.”