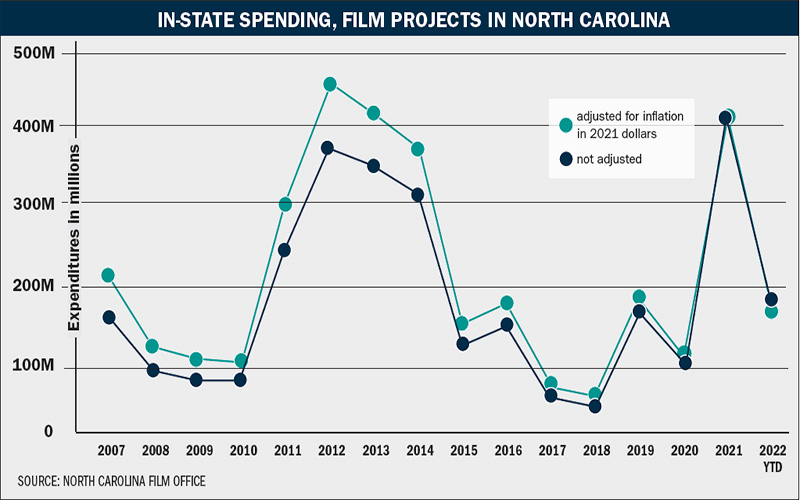 FIlm spending in North Carolina last year climbed back to levels previously seen before the legislative fallout in 2014. Adjusted for inflation, spending was close to 2012-2013 levels last year, (Graphic by Suzi Drake)
The film industry made a hearty and welcome comeback last year, a trend that’s continuing (albeit not quite as strong) this year. Following long stretches of lulled activity after talent and production dried up in favor of Atlanta, the city’s more politically and financially enticing neighbor, film appears back to its pre-fallout glory and seemingly here to stay.

A resuscitated incentive program (unceremoniously slashed by lawmakers in 2014) and the pandemic’s disruption to the industry, prompting oversized demand on streaming services to produce more content, contributed to the area’s rebound as a mainstay.

Notably, new soundstages in Wilmington are set to be constructed toward the end of the year – marking activity that appears hasn’t happened since the state’s largest studio, EUE/Screen Gems Ltd., expanded to add a 10th soundstage in about 2010.

An industry outsider is making it happen. Kirk Englebright, who has a background in business, owning retail chains and a real estate holdings company, accidentally stumbled into the film game in 2020.

In late 2019, Englebright purchased the former Coastal Beverage Co. facility off Market Street for $4.8 million with the intention of developing the space for a health care-related purpose.

As the pandemic spread, all 10 of EUE/Screen Gems’ studios were eventually booked solid. “We were the first market in the country to start filming again because of the low [rates of] COVID,” said Bill Vassar, executive vice president of EUE/Screen Gems.

“We had space listed commercially available, and our local film office realized that our space was very adequate and a good build for shooting film,” he said.

The space at 301 Harley Road already had the bones: an office support space, a large warehouse Englebright hastily converted into three soundstages and more.

“We started making changes pretty quickly when we saw what was going on with the economy,” he said. And so, Dark Horse Studios was born. “All these large multi-billion productions were sent in with a list of products and scripts that they were trying to develop but couldn’t because they were out of stage. So that kind of convinced us that we think the risk is worth the reward.”

Wilmington Regional Film Commission director Johnny Griffin, who said he could not comment directly on Dark Horse, said he would never encourage anyone to build a soundstage due to the sporadic nature of the industry.

“I’m never going to tell an investor, ‘Yeah, you know what, you should go out and spend millions of dollars, and once you do, I can guarantee you that we will have clients that will book that space,’” he said. “I've got a project coming in this weekend,” he said. “It's 50-50 whether it's going to happen and so I have no way to say whether or not that project will be here for the next three months and spend millions of dollars here or whether they'll go to another city that they're looking at.”

What Griffin will do, he said, is share stats and insights on industry trends, and let someone make their own financial decision. “If you could put wheels on the soundstages and take them anywhere, you wouldn’t have any worries at all,” he said. “But the problem is they're in the ground and they're stuck here, so the business is either here or it's not here.”

Even though it was a record year, Vassar said Screen Gems had a couple months of down time.

“I had eight or nine weeks where the studio was dead,” he said. “We used that opportunity to spend $1 million to repave the parking lot. We have not had that kind of time... There’s no way to get in there and do anything of significance in two months... It’s timing. That’s why you never know.”

Occasionally, when Screen Gems is out of space, Griffin will turn to Wilmington Business Development for insights on potential backup options. “WBD prides itself on its knowledge of market dynamics, including the disposition of office and industrial product (buildings & sites) for investors and/or employers considering the region,” said WBD CEO Scott Satterfield. “With that naturally comes an ability to be helpful to Johnny and his team as they scout sites and locations across our region to support the film industry."

When a production is turning to industrial space, he said they often pay a premium to use it for shorter durations than the building owner may be used to or is seeking in a tenant. Also, the recent surge in demand for industrial space has limited the availability of these secondary options.

Fluctuations in demand for studio or industrial space are common, often determined by factors out of the control of local players.

“It happens really quick and fast,” Griffin said. “So there’s really not a way to plan for out for these things. All of a sudden that drops in your lap. And you have at that moment, sort of take the temperature and say, ‘Okay, how much space do we have? How much space do they need? Is there availability? Is there not availability? Are they willing to consider a warehouse? Do they need to build sets?”

Several hurdles have prevented others from attempting what Dark Horse is doing, Englebright said. “It’s very capital intensive and it’s hard to project a revenue stream or future revenue in this industry,” he said. “If you do not have the capital, then you have to go locate capital...That’s a tough feat because you’re asking someone to invest in something with no guarantee.

It took “seven figures” to revamp Englebright’s facility into three soundstages. He is in the process of planning the construction of a new $20 million facility next door, which will add three more soundstages. The new building will utilize technology in soundstages “you only see in the West Coast,” he said.

Englebright said he wasn’t sure he could disclose which productions he’s hosted, but said he has two currently booked.

After Port City Daily first broke the news he had been quietly operating a new film studio, Englebright said he received 500 emails and messages. “It was very encouraging. It lets us know what we’re doing, it’s a good thing.”

Vassar, a film industry veteran who has seen the Wilmington market fluctuate since 2004, said his gut guess is for now, the region doesn’t have a need for more space. “I don’t see it,” he said. “But I’ve been wrong plenty of times in my life.”

Today, Screen Gems is hosting the second season of Amazon’s No. 1 hit, The Summer I Turned Pretty, and is talking to several films considering the area.

Last year, film spending broke the state’s record, bringing in $416 million (not adjusting for inflation). Asked whether the year felt like a peak or a return, Vassar said it was more of a return to the way things were, amplified by a bottleneck of pandemic-induced slowdowns elsewhere.

Guy Gaster, director of the North Carolina Film Office, said the state has not adjusted its records for inflation.

Adjusted for inflation, the data follows the same trends, but it becomes clear that last year’s data falls short of the pre-2014 peak. In 2021 dollars, according to a U.S. Bureau and Labor Statistics calculator, 2012 and 2013 raked in $457 and $423 million respectively, higher than last year’s record. Major motion pictures filmed in Wilmington during those years include Ironman 3, We’re the Millers, Tammy, The Conjuring and more.

In general, Wilmington productions attract well over half the share of in-state spending annually, Gaster said. As of June 20, productions had spent $180 million in North Carolina, according to data Gaster shared. It will amount to a top-five year, he said, but won’t break last year’s numbers.

Griffin said, “We’re six months through the year, and we’ve already had more business this year than we did in 2018 through 2020.”