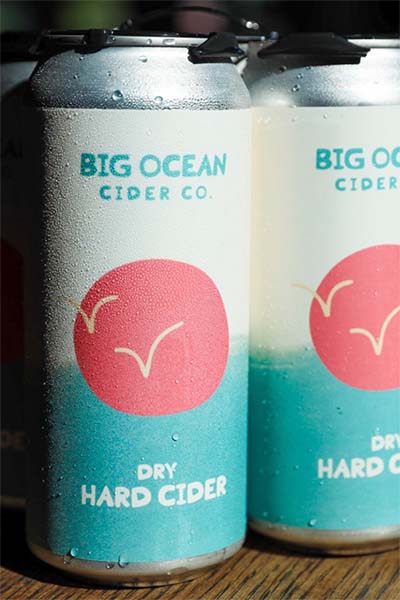 The brewery just launched the Big Ocean Cider Company. Its first beverage, a dry, hard cider, will be offered in canned and draft formats at both Flying Machine's Randall Parkway and Wrightsville Beach retail locations.

“Cider is a good alternative to beer and wine,” said Grant Steadman, who co-founded both Flying Machine and Big Ocean Cider. “It’s good, it’s got a sweetness to it, and it's not as alcoholic as wine.”

The company will also sell the cider wholesale to restaurants, bars, bottle shops, and possibly grocery stores. In addition to distributing the cider locally, expansion plans include selling the cider throughout the state and especially in the Triangle area.

Producing cider has always been a goal for the Flying Machine’s owners. Not only do they enjoy making cider but by doing so they are also meeting the high demand for non-gluten beverages, according to Steadman.

“Since 2018, there are significantly more people asking for a gluten-free product,” he said. “Some have allergies, and for others, it’s a lifestyle preference. We want to have options for everyone.”

Big Ocean’s first cider is made from English Cider yeast and American-grown apples. It is a dry, refreshing drink that has a bit of flair, according to Steadman.

The company will soon add a line of additional flavors to its cider offerings. Its production team is already experimenting, adding new fruits to ciders and making them sweeter.

Ultimately, the flavors Big Ocean carries will depend on its customers.

“We always listen to the consumer,” said Steadman. “If they ask for more sweet, we’ll change to that. We produce what people want.”

Steadman plans on a slow, steady growth for Big Ocean. For now, the company will continue to share production space and capacity with Flying Machine. However, if there is a need, a new facility dedicated to cider is a future possibility.

Smash-n-Dash rolls out 'sexy food' – and an altruistic mission