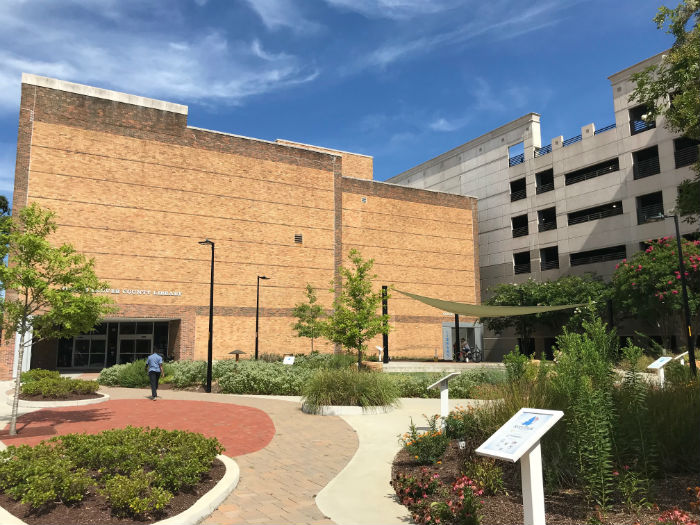 Project Grace, a public-private partnership in the works, would redevelop the downtown Wilmington block that includes the main branch of the New Hanover County Public Library. (File photo)
A unanimous decision by the New Hanover County Board of Commissioners on Monday allows a major downtown redevelopment project to move forward after five years of discussions.

The board approved a Memorandum of Understanding for Project Grace, a development that is expected to transform a 3-acre, county-owned block bordered by Grace, Third, Chestnut and Second streets, into a modern mixed-use project with public and private facilities.

The MOU for the public-private partnership was made with Zimmer Development Co. (ZDC), a Wilmington-based firm.

“We are fortunate to have two local firms involved in this project – Zimmer Development and LS3P [an architecture firm] – that bring a real and tangible commitment to our local community,” said Julia Olson-Boseman, chair of the board, in a news release after the vote. “And LS3P will also bring a new design perspective that includes our past and focuses on the potentials of this project.”

Some criticism of the project, including from some speakers during a public hearing Monday, has centered around the historic nature of the former Register of Deeds building and the main branch library building that are part of the Project Grace block.

According to the MOU, the project would include a new public library and a new location for the Cape Fear Museum, as well as private development, with the possibility of $23 million worth of apartments.

In addition, the public facilities portion had described a possible 75,000 square feet of city offices, but city officials had not committed to that, said Adam Tucker, development director with ZDC.

"We’re prepared to move forward without them," Tucker said.

The board removed the city office language from the MOU before voting on it.

Tucker said ZDC has received calls from potential office users and expect interest to increase as a result of moving forward with the MOU.

Commissioners also added to the MOU 8,000 square feet of shared space for the library and Cape Fear Museum that had been mistakenly left out of the MOU by ZDC, along with a 60–day discovery period for the developer to meet with the staff and boards from the library and museum for updated feedback.

In another potential change, the amount of workforce housing that would be part of the project, included in the MOU as 5%, could be increased, Tucker said.

Commissioner Jonathan Barfield described the MOU as a "skeleton" agreement that would be refined as the process moves along.

There are still a lot of issues to be worked out before a final development agreement is created, Tucker said, with a lot of moving parts such as where the facilities will fit on the block.

Tucker said to the board, "The purpose of the MOU is to provide a roadmap to get to all these answers that are unanswered today."

Under the approved MOU, the developer would manage the construction of both the public and private facilities and, at the end of construction on the library and museum components, the county would have a 20-year lease, at a potential cost of $4.5 million a year, on the buildings that includes construction, furniture and fixtures.

At the end of the 20 years, New Hanover County would own the library and museum, according to the MOU.

A timeline presented Monday puts the potential completion of a Project Grace development agreement by the spring of 2022, the start of construction during the summer of 2022 and the project's completion by 2024.

The development agreement would require another public hearing and be subject to review by the Local Government Commission.

SeaTox Sees An Ocean Of Potential

Whether as a vital source of food or a new, life-saving drug, the ocean has the potential to “improve global health and well-being,” a goal...