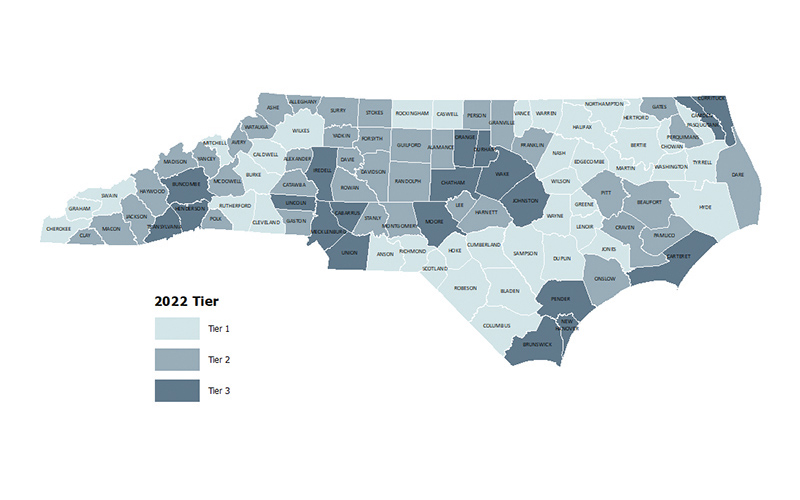 New Hanover and Brunswick were long categorized as Tier 3 until being downgraded to Tier 2 in 2021, prompted by pandemic-induced metric shifts. Tier 2 indicates moderate economic distress, with Tier 1 covering the state’s most distressed counties.

The rankings help determine eligibility for state economic development awards, among other grant programs. They also come into play when calculating, for instance, state child care subsidies awarded to low-income families based on market rates; however, the one-year downgrade had no local impact on this program as those rates are based on tier designations established in 2015.

Beginning Jan. 1, New Hanover and Brunswick bumped back up to Tier 3, representing two of the six improved rankings this year statewide, per updated designations released by the commerce department Nov. 30. Out of the state’s 100 counties (with 100th place marking the most robust economy – Currituck County in the Outer Banks this year), New Hanover fell from the 96th least economically distressed in 2020, to 79th in 2021, and climbed back up to 82nd in 2022. Brunswick slid from 81st in 2020 to 80th in 2021, and back to 81st this year.

Both counties’ tiered rankings slouched last year due to spiked unemployment rates, driven by the coastal communities’ strong reliance on tourism and hospitality, which took a hit during the pandemic.

The department of commerce’s rankings are based on four measures outlined by law: adjusted property tax base per capita, population growth, median household income and the average unemployment rate. Combined, the parameters offer a rough gauge of a community’s economic prosperity.

Officials in Pender County, considered a Tier 3 county, have long contested its ranking, asserting the mostly rural county is missing opportunities due to its highest-ranked category. At 87th this year, Pender is ranked higher than New Hanover’s urban hub, boosted by its comparatively higher median household income and population growth rate.

The one-year rating blip did not appear to have made a significant impact on the region (as of Dec. 20). Though economic development officials guessed the downgrade could potentially open the community’s access to more or expanded grant opportunities, it appears for now, these options weren’t heavily leaned on or awarded.

Just one company, Vantaca in Wilmington, appears to have been awarded while being ranked Tier 2, according to David Rhoades, spokesperson for the commerce department. Rhoades said he couldn’t find any evidence other Cape Fear counties or businesses benefited from the lower ranking in 2021. Still, he acknowledged it’s possible programs outside the department’s purview utilize its tiered ranking system, and there may be benefits he’s unaware of. Also, proposals submitted to the department of commerce before the end of 2021 could be awarded this year, with the department honoring tiered status at the time of application.

New Hanover County’s Cape Fear Museum was awarded a grant based on its Tier 2 status, according to county operations director Jennifer Rigby; additional details on this award were not available by press time.

As for Vantaca, the grant program the software company utilized – the Job Development Investment Grant (JDIG) program – does not include a structured benefit for more economically distressed counties. The program’s criteria call for tier status to be considered, but unlike other programs, tiered ranking doesn’t change the bones of what’s distributed.

Vantaca’s benefit from being Tier 2 was “probably irrelevant,” Rhoades said. The nearly $1.6 million state award the company is eligible for over a 12-year period wouldn’t have changed depending on its tier rank, according to Rhoades.

With JDIGs, the amount awarded to a company is “based more on the intrinsic aspects of the particular project and, of course, the competitive landscape we’re facing in a given recruitment situation,” Rhodes explained.

Though it wasn’t required by the program, New Hanover County and Wilmington kicked in another $200,000 in local incentives for Vantaca.

The state’s economic investment committee gave Vantaca the competitive incentive award to ensure it wouldn’t relocate to Atlanta, a prospect the company was considering due to the city’s major airport and proximity to Florida – a key growth market for the community association management software company, according to state records. Grant funds will derive from income tax generated by new jobs the company intends to create (104).

The amount of Vantaca’s award that ends up in the state’s industrial development fund utility account is lower than it would have been had New Hanover been ranked at its normal tier; at Tier 2, the award to the utility account will be up to $157,000 compared to the $393,600 it would have had at Tier 3.

“It’s the amount of that grant award that ends up funding the utility account that’s different,” Rhoades explained. “It’s kind of arcane, but that’s how it works for that program.”

These utility dollars are distributed to the state’s 80 most distressed counties in Tier 1 and 2 (Tier 3 counties are not eligible) to help rural communities finance infrastructure projects to net companies. Local communities do not appear to have received money from this utility account during the one-year eligibility period.

Though it was awarded in June, Precision Swiss Products’ JDIG incentive package to relocate from California to the International Logistics Park was processed with Brunswick County as a Tier 1 county, because the application was submitted prior to the tier downgrade. However, because the industrial park straddles the Columbus-Brunswick line, the state accounted for Columbus County’s Tier 3 status in making its utility determination, meaning no funds would go to that account. (Similarly, Columbus was awarded $2.1 million through the state utility account in 2017 to get infrastructure on site at the park, an award Brunswick would otherwise be ineligible for).

Precision Swiss is eligible for up to $1.7 million through its awards; the company chose North Carolina even though South Carolina offered more in incentives, according to the Triangle Business Journal.

Pacon Manufacturing was a beneficiary of this program in 2020, when Brunswick County and the state each pitched in $300,000 to recruit the manufacturing company. Had the move occurred last year, the county would have had to contribute half that amount.

Cardinal Foods in Burgaw announced its planned 48-job expansion grant in February. Awarded through the One North Carolina Fund, the state and Pender County will each pay the company $50,000 for hitting certain performance goals.