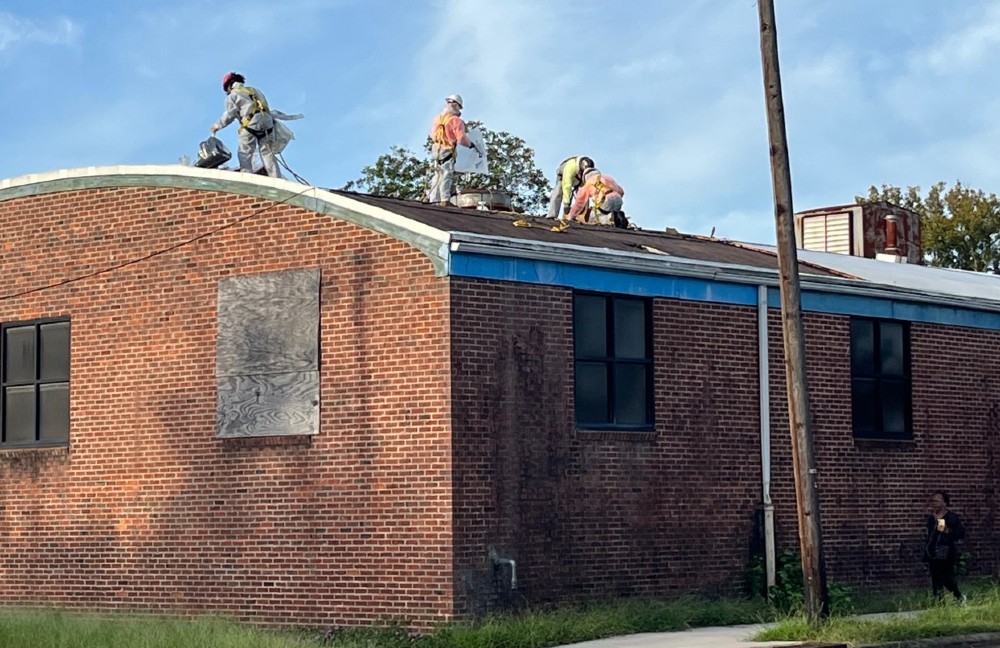 Workers focus on the roof of a building at 1110 Castle St. as they prepare it to be demolished. (Photo by Cece Nunn)

In recent weeks, crews in protective gear have been working to remove asbestos from buildings at city-owned property on Castle Street.

The former Wave Transit bus maintenance facility at 1110 Castle St. has been a dilapidated eyesore for several years. The city bought the 1.5-acre property in 1974, and Wave Transit vacated it in 2015. The site covers about half a city block with frontage on Castle, 10th and 11th streets, and includes two buildings.

Previous efforts to enter into a public-private partnership between the city and developers for a mixed-use project on the site failed, leading the Wilmington City Council to decide earlier this year to demolish the structures and put the property up for sale.

The council awarded a $168,700 contract to 4 Seasons Demolition Inc. to work toward that goal. The asbestos abatement portion of the project is expected to be complete this month, said city spokeswoman Jennifer Dandron, in an email late last month.

According to the resolution awarding the contract, the structures on the property "have continued to deteriorate after the initial damage sustained during Hurricane Florence in September of 2018, which caused significant failures in the roofing system, due to additional significant weather events and the passage of time."

Dandron said demolition is set to begin after the asbestos abatement. “Once we’re prepared to solicit bids, we’ll advertise it through our traditional channels (our website www.wilmingtonnc.gov/bid, press release, and a social media update),” she said.

While some council members have said selling the property is overdue and that it could fetch a good price in today’s market, at least one councilman said he doesn’t think there should be a rush to sell.

“I would love to see the city do something with it,” said Councilman Kevin Spears on Wednesday. “But I don’t want us to be hasty in a decision about what we do with the property and another opportunity comes along and it’s too late.”

Cory Thompson, owner of Thompson Design Build at 921 Castle St., said he thinks a mixed-use development would be an appropriate structure on the site to increase housing and commercial work environments for the community.

"I think it's a good property and it could help develop the area around it," said Thompson, whose company primarily builds custom homes. "I think it should go to good use."