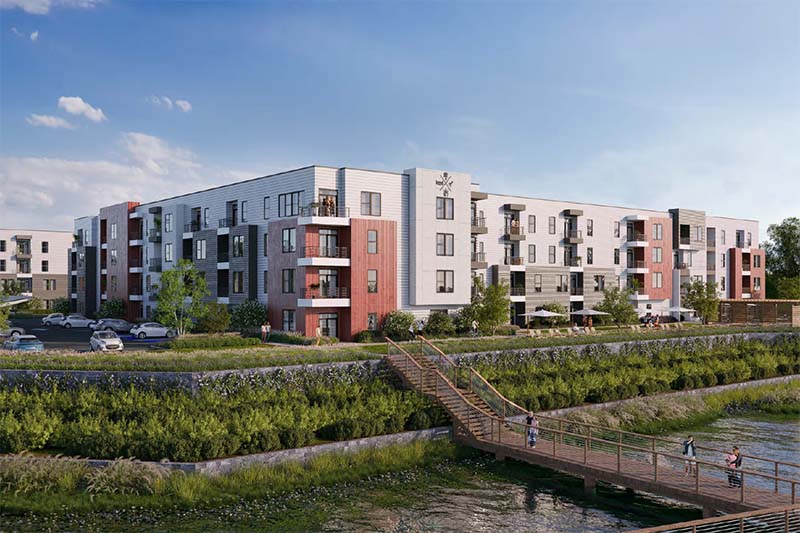 Plans for the Proximity at Dram Tree, a riverfront 203-unit mixed-use apartment project, could be thwarted by the N.C. Department of Transportation's aim to acquire the land for a future Cape Fear Memorial Bridge replacement. (Photo courtesy of Wilmington)
The N.C. Department of Transportation is attempting to acquire land currently slated for development adjacent to the Cape Fear Memorial Bridge in anticipation of an eventual bridge replacement.

Though a replacement is still unfunded, the proposed project stands in the path of each of the four options under consideration. Acquiring the property before it gets developed would save the state money in its eventual efforts to construct the new river crossing.

Development of the land would create a hardship for the department, according to N.C. Department of Transportation Division 3 engineer Chad Kimes. “That could drive the price up tremendously and could affect us replacing the bridge,” he said.

The Wilmington City Council was slated to vote on the proposed rezoning of 6.9 acres for the mixed-use project the Proximity at Dram Tree, on Jan. 10. But in a meeting with the property owner and development team, Mike Kozlosky, director of the Wilmington Urban Area Metropolitan Planning Organization (WMPO), said he asked them to consider delaying the rezoning request until an anticipated N.C. Board of Transportation decision is made on the proposed acquisition later this month.

The developer requested a continuance of the item, according to a city spokesperson, which is now scheduled for Feb. 7.

An 1880s brick building would be demolished to make way for the mixed-use project, located on the south side of the bridge on the east bank of the Cape Fear River. The land’s most recent use was for the production of iron molasses and an oil refinery, but for decades, it has remained vacant. Plans approved in 2008 to bring an 11-story condo to the property, then dubbed the Gateway Project, never came to fruition. Heavy industrial use of the site led to contamination and it is designated as a brownfields property.

The Wilmington Planning Commission approved the rezoning request, from urban mixed-use and light industrial to urban mixed-use conditional district, at its Dec. 7 meeting. Staff issued a neutral recommendation for the rezoning – a rare stance in a process that typically suggests approval or denial. In explaining the rationale for the neutral position, a city planning representative told the commission that the opinion of elected officials could sway the interpretation of conflicting policies. City plans identify the property as both an important industrial space and a high transition area, which could support either conclusion.

Later this month, the N.C. Board of Transportation will vote on whether to dedicate funds to conduct the anticipated appraisals necessary to formally initiate the acquisition process. The department’s Advance Acquisition Review Committee approved the local Division 3’s request for the protective acquisition on Dec. 15.

No other properties are currently under consideration for acquisition related to the bridge replacement project, according to Kimes.

He said the department is authorized to acquire land by proving a hardship under the authority of a federal bill, the Moving Ahead for Progress in the 21st Century Act passed in 2012. This is different from the land-freezing acquisition activity for planned projects, the N.C. Map Act, which was ruled unconstitutional by state courts in 2016 and helped land the department in serious financial trouble in recent years.

The four parcels on Surry Street identified by the department total 7.4 acres with a combined tax value of $962,500, according to county records. Kimes said the department’s general policy is to conduct at least two appraisals when properties exceed $1 million, which he anticipates will apply in this matter.

Part of the negotiations and appraisals will factor in how much work toward the proposed development has been conducted, Kimes said. Owners are encouraged to conduct their own appraisal as well, Kimes said, and the parties can then compare valuations. “We go from there to keep it from going to condemnation,” he said. Eminent domain is a last resort, he said.


Replacing the bridge could cost up to $900 million, according to the latest state estimate shared with officials this summer. The four paths under consideration identified in a 2020 feasibility study each call for a bridge directly to the south of the current structure, which would allow travelers to continue using the crossing until it is retired upon the opening of the new one.

While funding sources for the big-ticket replacement still haven’t been identified, in recent months, the department dedicated $2 million toward studying the endeavor.

Last month, the department held a kickoff meeting with CDM Smith to conduct a traffic and revenue study for the bridge replacement. This study, expected by fall 2023, will present a rough range for tolling rates and a traffic analysis that would predict shifting motorist patterns if the toll were to take effect. In February 2022, the WMPO board reversed its earlier stance against a tolling alternative to consider all bridge replacement options, including introducing a toll.

Later this month, consultants with HDR will begin to prepare a planning document that will select a preferred option for the bridge. Once complete after roughly two years, the study will allow the department to move forward with design and environmental analyses.

Both studies and the pending acquisition are part of the department’s aim to gear up for future funding attempts. “The whole purpose of all this is to be better prepared when we go through the next round of prioritization, which will be the fall of this year,” Kimes said.

In prior funding rounds, the bridge replacement did not score well enough to compete with other costly projects.

Representatives of Cape Fear Development Partners and Riverman LLC did not respond to a request to comment.