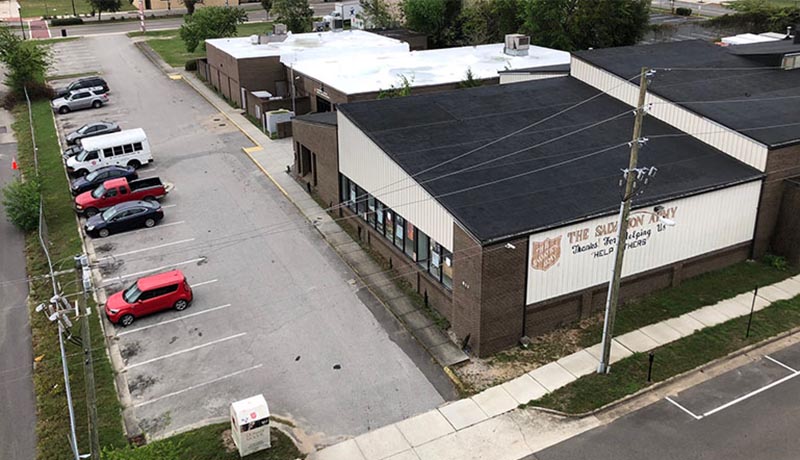 The city of Wilmington could pay more than $4.8 million for the Salvation Army property at 820 N. Second St. (File photo)
The Wilmington City Council will consider allocating funds to buy another northern downtown gateway property, for a price of nearly $5 million, at its meeting next week.

The 1.88-acre property, 820 N. Second St., has been home to a Salvation Army shelter, the organization's administrative offices and one of its thrift store. WHQR reported in December that the shelter would be closing and that the Salvation Army anticipates a sale of the property this year.

"Acquiring this property holds both near and long-term strategic value for the economic development of the north end of downtown Wilmington," according to the council's agenda for its Jan. 10 meeting. "The funding ordinance in the amount of $4,814,500 covers the sale price, closing costs, due diligence and operating costs through June 30 of this year."

The agenda documents also state, "At the direction of City Council, the City Manager entered into a Purchase and Sale Agreement with the property owner on July 28, 2022, placing $30,000 in an escrow account to be held until closing, which is scheduled to take place on or before January 25, 2023."

Planning a new campus in Wilmington, the Salvation Army in 2016 bought more than 20 acres at 1220 N. 30th St., for a little over $1 million, according to property tax records.

In October, the council voted to award Salvation Army $1.3 million from pandemic recovery funds to help build a roadway to its new facility at 1220 N. 30th St., the Center of Hope Shelter and Corps Community Center.

Efforts to reach a Salvation Army representative were not immediately successful Friday afternoon.

The city council is scheduled to consider appropriating the money to buy the property as part of its regular meeting at 6:30 p.m. Tuesday.

City officials and East West Partners, the company that worked in conjunction with Wilmington on the downtown mixed-use project River Place, have been planning a transformation of the city's northern gateway that was put on hold when the pandemic hit. The gateway project, at one time valued at $90 million, is expected to include residential and commercial space, as well as the potential for a hotel and/or grocery store.