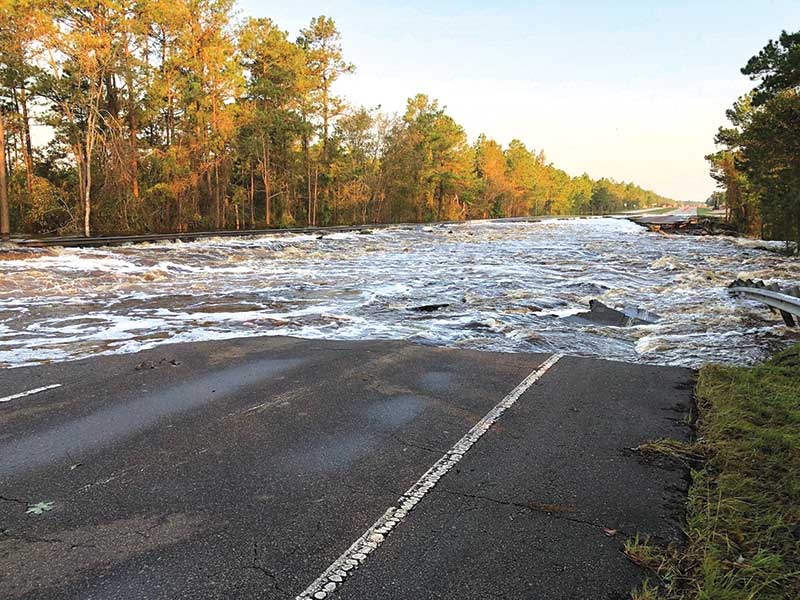 An N.C. Department of Transportation photo from the aftermath of Hurricane Florence in 2018 shows a flooded portion of U.S. 421. (File photo)
The city of Wilmington's state legislative goals are expected to include support for finding ways to fund transportation and infrastructure needs.

The Wilmington City Council heard a summary of the state and federal proposed goals Monday morning from the city's director of legislative and intergovernmental affairs, Kara Spencer, who has been in the post for a little over two months. New Hanover County's state legislators are Republican Senators Michael Lee and Bill Rabon; Republican Representatives Ted Davis and Charles Miller; and Democrat Rep. Deb Butler.

After being sworn in Wednesday, state lawmakers will head back to Raleigh at the end of January for their next session.

"At that point, we'll really begin in earnest our efforts to meet with them and to represent Wilmington's needs and priorities as laid out in our legislative agenda," Spencer told council members during Monday's agenda briefing. The council is scheduled to vote on a resolution authorizing the city's 2023 state and federal legislative agenda at its regular meeting at 6:30 Tuesday in the council's chambers at City Hall, 102 N. Third St.

Providing one example, she said state lawmakers could address transportation and infrastructure funding needs through discussions about alternative methods, such as increased electric vehicle and hybrid vehicle registration fees or a higher highway use tax.

Wilmington's proposed legislative agenda seeks to support transportation and infrastructure funding "that is reflective of the growth and needs of the Wilmington region and our state," according to agenda documents.

Spencer told the council, "We want to emphasize the importance of that transportation funding in terms of maintaining accessibility of the area. That's really a safety issue, so people in natural disasters before during and after, can have access to our city to and to their homes."

During Hurricane Florence in September 2018, flooding led to Wilmington being described as an island by national news sources because of road closures.

Other state goals included in the proposed agenda are to: The city's proposed federal legislative goals for 2023 are to: