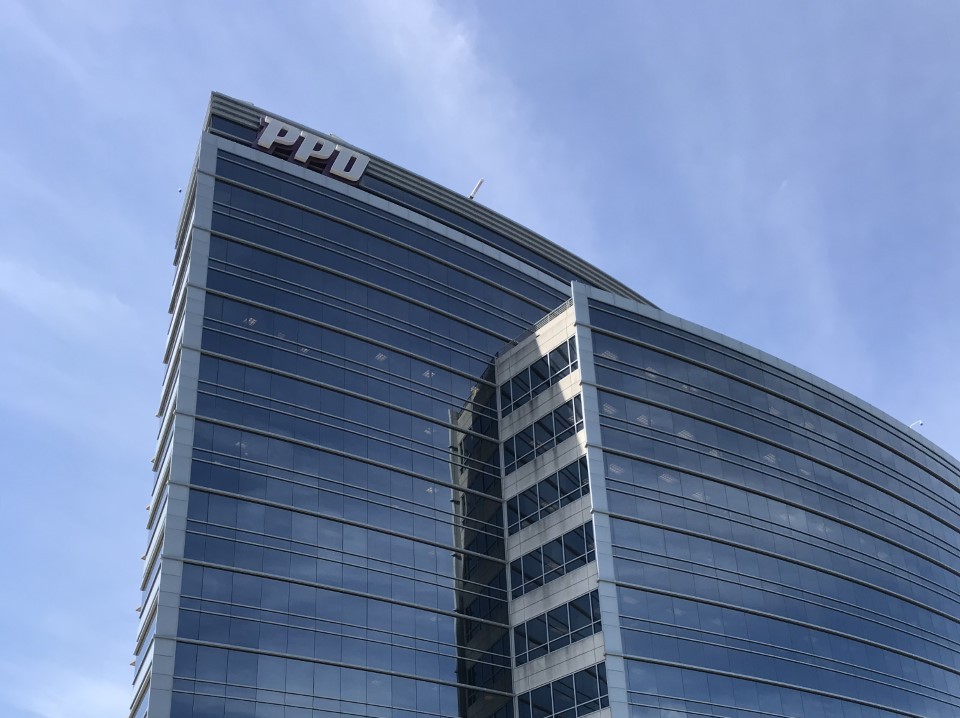 The PPD headquarters building in downtown Wilmington, now under the ownership of Thermo Fisher Scientific, could be purchased by the city of Wilmington. (File photo)

The Wilmington City Council is expected to take up the matter at its Tuesday night regular meeting, said Councilman Charlie Rivenbark on Thursday. The 380,000-square-foot building at 929 N. Front St. could be used by the city for three or four floors of offices while the rest could be leased out at market rate, Rivenbark said. Global pharmaceutical firm Thermo Fisher Scientific, the current owner of PPD and the property, could lease a portion of the building for at least three years, if the company accepts Wilmington's offer.

City officials have been evaluating the government's office needs for several years, estimating that solving the ongoing problem of a lack of space could cost at least $90 million because of factors that include the rising costs of construction and maintenance expenses. The purchase would include the PPD parking deck and surface parking, amounting to nearly 1,500 spaces.

"We’re scattered out in about six or seven different buildings, and we’re able to buy this at a darn sight cheaper,” Rivenbark said, referring to the city's space needs estimate.

Where the $68 million would come from would be determined as the city studies the potential purchase during a due diligence period of 120 days, said Wilmington Mayor Bill Saffo. Tuesday, the council will look at spending a refundable $500,000 from what equates to the city's savings account as earnest money to put the property under contract.

Saffo said the council voted unanimously in closed session in favor of the process so far, and council members seemed to be in agreement about taking the next step.

Referring to the funding source for the transaction, Saffo said, "we're working through our budget process; we'll have to determine whether there'll be a tax increase or not. Obviously, we're going to divest ourselves of eight different properties in addition to possibly the north portion of the [Thermo Fisher] property. And our whole goal and objective here is no matter what the purchase price is just to divest ourselves of those properties, and then apply those toward the reduction of the purchase price. And then all of that obviously has to be evaluated by the Local Government Commission and approved by the Local Government Commission for us to move forward."

Saffo said Thermo Fisher came to the city with the idea.

"They approached us and then we started looking at it and we started saying to ourselves, 'This makes a lot of sense,'" he said.

According to a city news release Thursday afternoon, the purchase agreement would involve "a negotiated sales price of $68 million for the entire campus, including office furnishings, which reports a combined real and personal property tax value of $141 million as of 2022. The city’s costs could be substantially offset by selling several of its current office buildings, which would no longer be needed, excluding historic Thalian Hall/City Hall. Selling the adjoining development lots and leasing excess office space would further offset the city’s acquisition costs. Depending on final terms, the Thermo Fisher lease could generate around $2 million annually and additional space would also be made available for lease."

Acquiring the PPD campus, the release stated, would allow the city to:

Thermo Fisher, which bought Wilmington-founded contract research organization PPD in a $17.4-billion deal in 2021, announced in April last year that the company planned to explore opportunities to sell the landmark downtown property.

With most of its 1,700 employees in Wilmington preferring a hybrid remote-working mode, the company didn’t need the space, officials said at the time.

Thermo Fisher provided a statement via email on the city's potential offer. ​"Interest in the property has been high, with a number of proposals received from interested parties, including from the City of Wilmington. Our business is evaluating various proposals, but no agreements have been signed at this time," the email stated.

As for where Thermo Fisher will land when it comes to smaller office space, that exploration "is part of a process that could take two or more years to complete," company officials have said.

“In view of our space needs assessment, acquiring this 12.5-acre campus in northern downtown could provide a highly creative and far more cost-effective solution to the city’s long-term space needs, especially in view of the opportunities to offset the purchase cost and add parking capacity. Over the course of the 120-day due diligence period, city staff will thoroughly analyze the costs and benefits of the acquisition so that City Council can make an informed decision,” said City Manager Tony Caudle.

If the city does buy the PPD building, it won't be the only recent addition to its real estate inventory. The Wilmington City Council voted unanimously Jan. 10 to allocate $4.8 million to buy the 1.88-acre parcel at 820 N. Second St., across the street from the PPD building, from the Salvation Army.

In April 2022, the city bought 115 N. Third St., also known as the Harrelson Building or United Bank Building, for more than $10 million, according to property tax records. City officials said that purchase would give the city government more office space.

"This property’s availability provided a strategic opportunity for a smooth transition to a larger footprint with no disruption to service delivery. It also reaffirms the city’s commitment to downtown Wilmington as a thriving hub of business and activity,” said Tony Caudle, city manager, before the purchase.

Since Thermo Fisher's announcement about a potential sale of 929 N. Front St., speculation in the local real estate industry about the property's future has ranged from using it for housing to keeping it as is. Marketing materials by real estate firm Jones Long Lasalle (JLL) called the Thermo Fisher Scientific building a "mixed-use redevelopment opportunity."