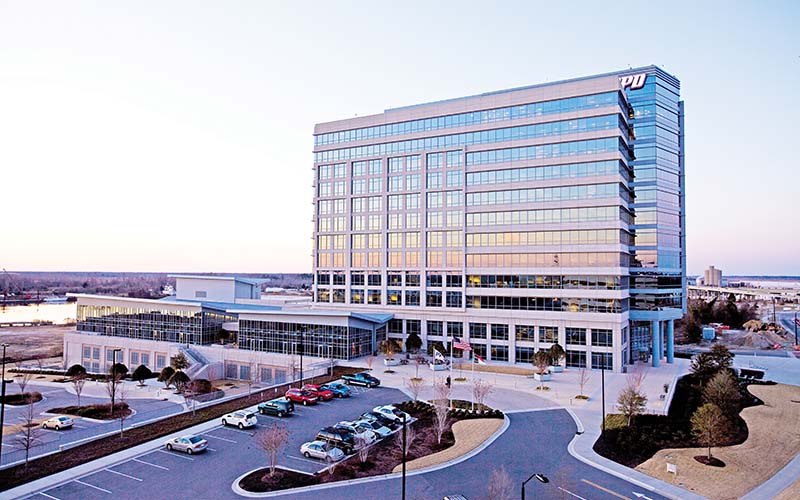 At its Tuesday meeting, the city council authorized sending the global science firm a purchase offer contract valued at $68 million. Thermo Fisher must accept the offer to lock the 120-day exploratory deal in place.

“We have reason to believe that they would look upon it favorably, but there are other offers sitting on the table,” city manager Tony Caudle told council members during the meeting.

The city will spend $250,000 studying the potential purchase and will put up $500,000 in refundable earnest money. Work on the due diligence process will begin immediately, city staff said, with a request for proposals seeking a variable rate to finance the deal set to be issued as early as Wednesday.

“We’re consolidating what would usually take six months into probably a 45- to 60-day window,” deputy city manager Chad McEwen said of the city’s plans to conduct a conditions assessment of the 12-story building.

“This is going to be a transformational type of project for the city,” Caudle said.

Over nearly three decades, the city has conducted multiple space needs assessments, many of which have gotten “placed on the shelf,” Caudle told council members. The latest assessment, released in November, recommended a new building to replace the city’s current administrative offices at 305 Chestnut St. Estimates for the razing and construction project range from $90 million to $96 million.

Purchasing the former PPD headquarters represents an opportunity to save anticipated capital expenditures from the Chestnut Street rebuild – a project Caudle said staff had not yet had the opportunity to formally present to council for consideration. In lieu of a rebuild, an estimated $4.1 million in repairs to the building are necessary “just to keep the facility operational,” he said.

City functions are scattered across at least seven different buildings, with many located downtown. “We did not get into this predicament overnight. This is what happens when you have a growing city and growing demands for service,” Caudle said. “You look anywhere you can for places to put folks.”

Except for historic Thalian Hall, the city would sell its other office real estate assets to offset the acquisition expense. “We’ve already had inquiries about properties that we would vacate,” Caudle said.

The potential acquisition entails 370,000 square feet of space, two adjacent lots that could be utilized for economic development and a parking deck. City officials hope to use the additional parking spaces during off-work hours to facilitate needs prompted by the city-owned Live Oak Bank Pavilion. A surface lot contains about 240 spaces, about 280 are located underneath the building and about 1,040 are contained in the parking deck, McEwen told council members. Years ago, McEwen said the city attempted to broker a deal about using PPD’s parking space during off hours.

If the city is successful in its bid to purchase the building, it could potentially negate the need to temporarily relocate staffers, as would be necessary if the Chesnut Street offices were rebuilt. City council members – most of whom maintain active careers in real estate – discussed how the deals to sell the city properties could be structured.

“The term ‘time is of the essence’ has never been more important than it is in this,” Councilman Charlie Rivenbark said.

Council members asked whether the city could sell its assets before closing on financing necessary to purchase the building. “We could have, theoretically, property under contract and ready to be sold,” Caudle responded. “But it would take a Herculean effort to be able to do that.”

Mayor Bill Saffo asked Caudle about how the Local Government Commission (LGC), which is expected to review some aspects of the deal, might react to the lease arrangements the city is considering. “The LGC lives in the 1930s … based upon trying to keep the financial stability of local governments intact,” Caudle said.

So far, plans call for the city to occupy up to six floors and for Thermo Fisher to lease back up to three floors. This would leave at least a few floors available to be leased at a market rate. McEwen said “there has been some interest” in leasing space in the building since the city’s plans were revealed last week.

“The LGC will have a strong say in how much of the building we occupy,” Caudle cautioned. “The reason being is because we cannot be seen as buying that property with taxpayer money and being able to make money off of the leases. There will be a stipulation about how much floor space needs to be occupied [by the city].”

The city council will have to hold a public hearing in April to approve the financing aspect of the deal and in May might have to hold a hearing for a tax rate adjustment as part of the new budget cycle. “That number is yet to be decided,” Caudle said.

Caudle told council members he would be back with an update in 90 days. “Get to work,” Saffo said.

A Thermo Fisher representative did not immediately return a request to comment.