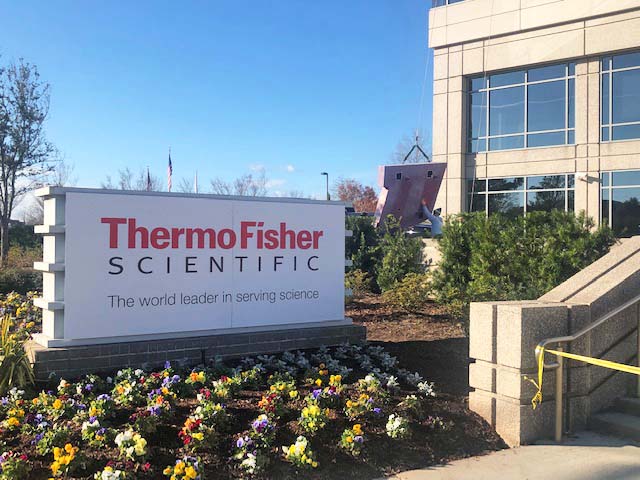 The PPD letters were removed from the top of the downtown headquarters Thursday morning less than two weeks since Thermo Fisher's acquisition officially completed. (Staff photos)

Less than two weeks post-close, Thermo Fisher ordered the removal of the three large, purple letters from the top of PPD’s 12-story Wilmington headquarters, after being affixed to the building since its 2007 opening.

The global science giant is wasting no time rebranding – externally at least – as a temporary Thermo Fisher sign is already up, just eight days following the formal closure of its $17.4 billion acquisition of the homegrown contract research organization, PPD.

“This is a routine step as we bring PPD into the Thermo Fisher Scientific family of businesses as the company’s new clinical research business,” a Thermo Fisher spokesperson wrote in an email.

Temporary Thermo Fisher signs will be replaced with permanent ones in the “near-term future,” according to the spokesperson. The companies had seven months to prepare for the transition after it was first announced in April, before it cleared regulatory desks earlier this month.

PPD is being incorporated into Thermo Fisher’s laboratory products and services segment. 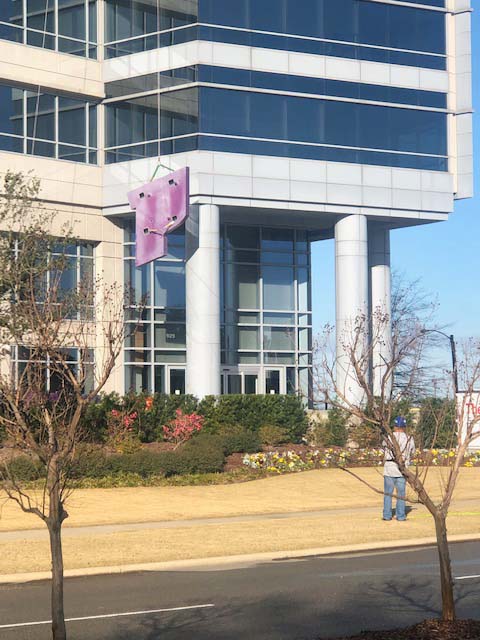 Though PPD CEO David Simmons has stepped down, no layoffs have been announced; before the close, PPD bumped up its global workforce by 19% year-over-year as of the latest quarter.

With an emphasis on its remote workforce, PPD’s headquarters and parking lots have had noticeably less activity coming out of the pandemic. Amid speculation that the building itself could be utilized in other ways, PPD confirmed the day of closing that no facilities or location changes were planned.

“With the addition of PPD, Thermo Fisher will offer a comprehensive suite of world-class services across the clinical development spectrum − from scientific discovery, to assessing safety, efficacy, and health care outcomes, to managing clinical trial logistics, to the development and manufacturing of the drug product,” the spokesperson wrote. “As a trusted symbol of quality and performance in clinical research, PPD will continue as one of Thermo Fisher’s industry-leading brands serving our valued biopharmaceutical customers.”

Meanwhile, another major acquisition in Wilmington is moving more slowly from an outside branding perspective. The New Hanover Regional Medical Center sale to Novant Health – approved at the local level in October 2020, OK’d by the attorney general in January – officially closed Feb. 1.

NHRMC branding still appears inside and outside the hospital campus, 10 months post-close.

With 8,424 employees as of this month, Novant Health – the largest employer in the region – has taken its time in consolidating the two major systems.

“As a consumer and patient-facing organization with a large footprint across the region, a rebrand on this scale is multi-faceted as we provide critical healthcare services to our communities,” a Novant Health spokesperson wrote in an email. “This is a very intentional, thoughtful process and our teams will continue to make progress toward this effort.”

The final rebranding will wrap by next year.

“You may already see some changes, and a full transformation will be complete next year,” the spokesperson wrote. “While that work continues, our teams have already been working closely together to deliver on major partnership goals to improve the health of our communities.”