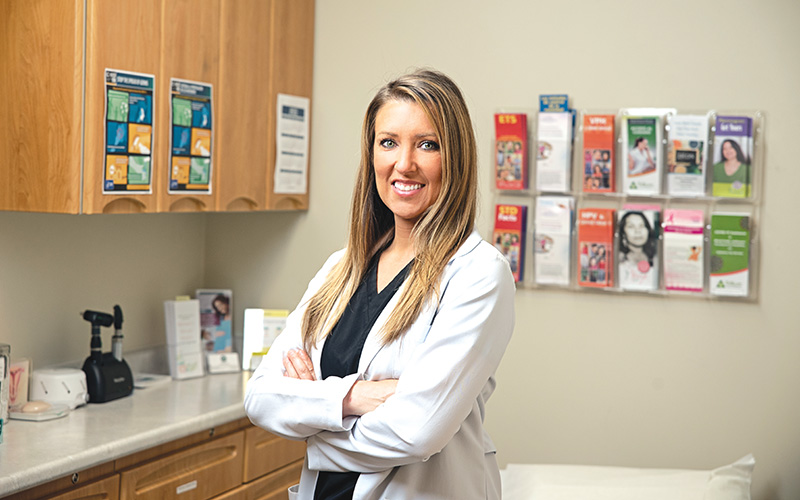 It’s all part of being a health care provider in a rural county.

“You just never know what’s going to walk in the door. You have patients who haven’t been seen by a doctor for years who come in,” said Batts, a Scotts Hill resident who works for the Pender County Health Department. “Then they come in with a whole laundry list, and we try and do the best we can to meet all of those needs in one visit if we can because we do realize that a lot of our patients have a lack of resources and may not be able to come back.”

Like rural communities across North Carolina, Pender County residents face a number of health care concerns: fewer providers, fewer medical facilities, a lack of transportation, a lack of resources to pay for treatment and more.

A health needs assessment by Novant New Hanover Regional Medical Center, looking at 2019 through 2021, showed that New Hanover County had 10.3 physicians per 10,000 people as of 2018.

Having served as Pender’s health director for 11 years, Carolyn Moser has seen firsthand that access to care is undoubtedly the biggest challenge in the county of about 63,000 people.

She said, “Pender has limited health care providers, so many residents have to travel to adjoining counties such as New Hanover, Onslow or Duplin for care.”

Black River Health Services operates three clinics in western Pender, where income levels are lower than other parts of the county. Their facilities in Burgaw, Atkinson and Maple Hill treated 6,500 patients last year, said Lee Ann Amann, who has been the 501(c)(3) organization’s CEO for seven years. Many of Black River’s patients are uninsured or underinsured.

In Pender, she said, “there’s a lot of diabetes and heart disease and other factors at play, obesity. You’re dealing with a sicker population, and so what we find is trying to get health care providers who understand the level of illness you’re dealing with plus willing to work in a rural setting – it’s a little more difficult.” 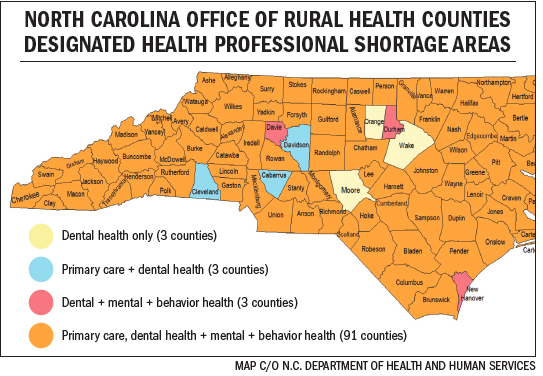 Chronic conditions such as heart and lung diseases and strokes are prevalent in Pender, Moser said. Unfortunately, she said, Pender also has high rates of vehicular injuries and deaths along with increased rates for suicides.

At Black River clinics, the organization has one doctor, and much of the care is completed by nurse practitioners and a physician assistant.

“There is a shortage of physicians period because the pandemic really took a lot of people out – a lot of the older physicians and primary care providers just retired,” Amann said. “Our health care provider system was aging out, and we’re not replenishing it as much as we should.”

Meanwhile, medical schools were working on their onerous restrictions for admission, she said, but “we kind of ran out of time.”

Many providers prefer grouping themselves in or closer to urban settings because of higher-rated schools in some cases, the availability of cultural activities and other perceived benefits, Amann said.

“What we want to do is eventually start encouraging people from small towns to get their degrees and come back to their small towns to live,” she said. “They know that town; it’s their town. They know the people, and that’s really important so I think that’s the next step in healthcare.”

Black River received a grant from the federal government’s Health Resources and Services Administration of $500,000 for the planning stages of bringing a residency program to Pender County.

“We’re a long way from sure on that one, but it would be wonderful if we could do it because that would be training young physicians in Pender County and hopefully they’d come back to Pender County,” Amann said.

Janalynn Beste, family medicine residency chairwoman and residency director at Novant Health, and Joe Pino, associate dean and campus director of the UNC School of Medicine’s Wilmington campus, partnered with Black River to obtain the HRSA grant, according to an article on Novant’s website. The article said Beste and Pino are working on starting the rural family medicine track at Black River by July 2024, the article stated.

“It will eventually happen, but that’s just something we’re exploring right now,” Amann said. “We wouldn’t even be able to explore it without the grant.”

Provider pay, of course, is another issue in the recruitment process. When Amann first took the helm at Black River, after managing a rural health care clinic in South Carolina for 25 years, the organization was in the red.

Amann applied for Black River to become a Federally Qualified Health Center Look-Alike. Such centers provide primary care services in underserved areas, provide care on a sliding-fee scale based on ability to pay and operate under a governing board that includes patients. The designation, although it doesn’t lead to the same funding that a standard FQHC gets, means more money for Black River.

“That has made a difference to where we aren’t losing money every year. We’re making money every year because that was unsustainable,” Amann said. “I can compete with the big guys in Wilmington; when I first got here, we could only afford nurse practitioners coming right out of school, and they’d come work for us a couple years and then go to Wilmington.

“Now I can recruit providers who want to stay to work in a rural area.”

Unlike some other rural communities in the state, Pender does have a small hospital. Pender Memorial Hospital, now called Novant Health Pender Medical Center, opened in Burgaw in 1951 and joined the NHRMC system in 1999. The hospital is still owned by Pender County, even after Novant Health purchased NHRMC last year.

Novant now manages the facility, but that relationship could change in years to come. The operating and lease agreements for the medical center expire in 2023.

Asked for an update, Novant officials said in an email, “Since we began managing the Pender facility, we have invested $20 million in capital projects, including renovations and facility improvements, and have made other major investments, both in team members and by supporting hospital operations. We remain committed to Pender County under an operating agreement with the current term ending in July 2023. We are in the early stages of discussions with Pender County to determine the best next steps for the community.”

Ruth Glaser, the president and COO of the 86-bed hospital, lives in Burgaw, only a couple of blocks from her workplace. She said her emergency department sees about 50 to 55 patients a day on average.

Recent Novant employee pay raises have helped the hospital with recruiting and keeping providers, Glaser said, while other factors also play into Pender’s ability to attract them.

“If we can get a physician to cross our threshold and see how special a small rural community hospital is,” Glaser said, “a lot of times, they will end up staying.”