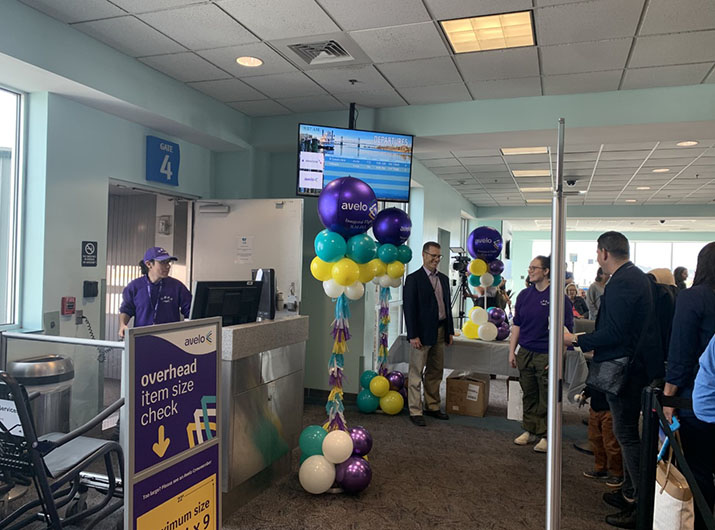 According to airport officials, approximately 180 of the 189 seats available on the Boeing 737-800 aircraft were full. Passengers waiting at the gate for the 9:35 a.m. flight were greeted with balloons, Avelo swag and stuffed croissants from Burney’s Sweets & More.

The flight was unaffected by residual weather from Tropical Depression Nicole, even though the aircraft departing for Fort Lauderdale arrived from Orlando International Airport, which temporarily suspended commercial flights Nov. 9 but resumed domestic service yesterday at 8 p.m.

Avelo entered the Wilmington market in June with fares as low as $39 for three nonstop routes. Just months later, Avelo announced it would add this fourth seasonal route in November. Such a rapid expansion of services from the airline along with solid performance on those routes is a good sign that it will continue to grow, according to airport director Jeff Bourk.

“We know that they’re continuing to look at other routes and other opportunities, and we hope that they’ll add more services at ILM in the future,” Bourk said.

Yesterday, Avelo announced the addition of nonstop routes to six different cities in Florida at Raleigh-Durham International Airport, where the airline had been offering nonstop service to New Haven, Connecticut since May. Bourk said Avelo’s expansion at Raleigh-Durham is a good sign for Wilmington as well.

“I think that’s a sign of how well the North Carolina economy is doing overall. Seeing them grow there is a good thing for us down here as well,” said Bourk.

Airport officials are working to secure more nonstop flights for ILM passengers from both existing carriers like Avelo and ones new to Wilmington.

“We want to see more nonstops, not just with Avelo but any airline out of this market, and we’ll continue to work on that,” Bourk said.

Born of the pandemic-induced blow to the airline industry, Avelo Airlines launched in April 2021 and now serves 34 destinations across the country, which are “primarily underserved communities” according to a release from the airline.

Inbound and outbound service to Fort Lauderdale is offered every Monday and Friday through the end of April, with outbound service scheduled for mornings and inbound service in the afternoon. One-way fares start at $39, and  Avelo is currently offering Black Friday discounts on some purchases on its website.