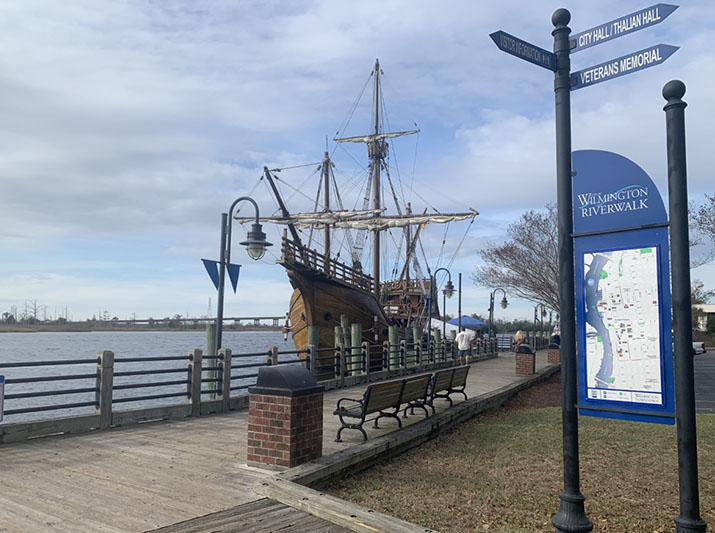 The 95-foot-long ship currently stationed at London Wharf is a replica of the Nao Trinidad, one of five ships that departed Spain in 1519 under the direction of famous explorer Ferdinand Magellan. At a time when some still thought the earth was flat, Magellan sought a westward route to the spice-rich islands located east of Europe in the South Pacific. Only one ship in Magellan’s fleet made it back to Spain three years later, and with its return, it became the first ship to sail around the world.

Nao Trinidad is one of three replicas from Magellan’s fleet designed by a Spanish nonprofit to sail around Europe and the Americas bringing history to life, according to Nao Trinidad project manager Marina Quesada.

“The idea is to spread Spanish maritime history all over the world, which is something really important that kids in school don’t know about,” Quesada said.

“It’s a huge attraction,” Fornes said. “It’s not just locals. We more out-of-towners look at the ships than local people.”

WHET brought numerous tall ships to Wilmington in recent years – including Christopher Columbus replicas Nao Santa Maria in 2021, and Niña and Pinta in 2017 – through a partnership with Nao Victoria Foundation, a Spanish nonprofit organization that constructs replicas. Tall ship El Galeon drew about 10,000 visitors during its 2015 visit, according to Fornes.

Finished in 2018, Nao Trinidad was constructed based on historical plans and drawings. The ship generally mirrors the one Magellan himself captained 500 years ago, and Quesada said the crew of 10 who steer the ship today use the same mechanism available to Magellan’s crew: the whipstaff.

A predecessor to ship’s wheels, the whipstaff is essentially a pole that travels through the deck to the tiller and the rudder. Quesada said navigating the ship with the whipstaff requires the work of at least two or three people at a time.

Until Nao Trinidad departs next week, visitors to the ship can see the whipstaff as well as the captain’s chambers and an exhibit about Magellan’s expedition in the hull. Crew members are also available to share their experiences sailing on the historic replica.

Tours are available 10 a.m. until 6 p.m. on Friday, Nov. 18, and Saturday, Nov. 19. On Sunday, tours are offered from noon until 6 p.m. Tickets can be purchased online or at the dock, located off Water Street between Chestnut and Grace streets.