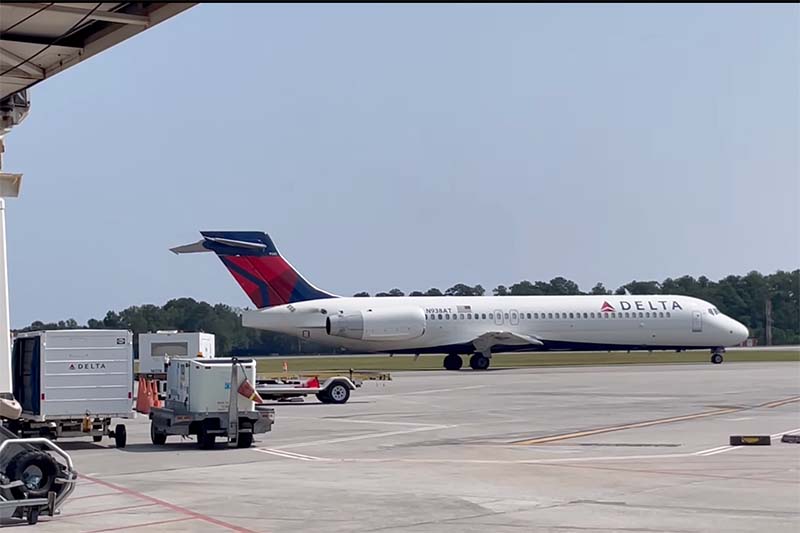 Delta Air Lines recently extended its flight to LaGuardia Airport to a year-round route out of ILM. (Photo courtesy of ILM)
The Thanksgiving holiday makes for a historically busy travel week out of Wilmington International Airport.

In fact, it’s the busiest travel period of the year, according to ILM spokesperson Erin McNally.

“Generally, the busiest travel days are the Tuesday and Wednesday before Thanksgiving as well as the Saturday and Sunday after Thanksgiving,” she said.

This comes as ILM has experienced month after month of record-breaking travel. Last month, departures out of ILM hit a record high for the month of October, at nearly 51,700 – an 18.4% increase over pre-pandemic travel levels in October 2019.

This year, ILM has seen the announcement of its first and second low-cost carriers – service officials had worked to lure for years. Avelo Airlines launched its first three routes this summer, including a seasonal stop to Baltimore, Maryland, it replaced earlier this month with a seasonal route to Ft. Lauderdale, Florida.

McNally said the increased travel activity has been driven by the additional carriers, nonstop flights and larger aircraft offering more seats. “At ILM, we are seeing strong travel demand and passengers are taking advantage of these new flight options and filling the seats,” she said. “The combination of airlines increasing their capacity at ILM and there being an increase in passengers booking tickets to/from ILM results in record-breaking passenger numbers and record-breaking months.”

Also recently, Delta Air Lines extended its seasonal route out of ILM to LaGuardia Airport to a year-round nonstop. “For Delta to extend this service, we believe Delta saw a business case to make the route year-round.  We appreciate Delta providing year-round service to Atlanta and LaGuardia,” McNally said.

Delta spokesperson Morgan Durrant said while the carrier remains measured in how it grows its network, “our route structure is built around where customers want to fly most.”

For passengers anticipating crowded airports in the days ahead, McNally suggests arriving two hours prior to flight departure times. Parking availability is updated frequently on ILM’s website, and McNally suggests checking with specific carriers for the most up-to-date information on specific flights.

In a release Tuesday, the Transportation Security Administration (TSA) shared that ILM would soon have new computed tomography screening technology installed in December. These new scanners use an algorithm to generate a rendering of luggage contents, intended to reduce the number of secondary bag checks, according to TSA.

This new technology allows passengers to leave electronics in the bag; however, the new system has a smaller opening, which means oversized luggage can't be accommodated. "TSA officers will be available to assist passengers with these new divesting procedures," the release states.

Report: ILM boosts economy by $2.5B