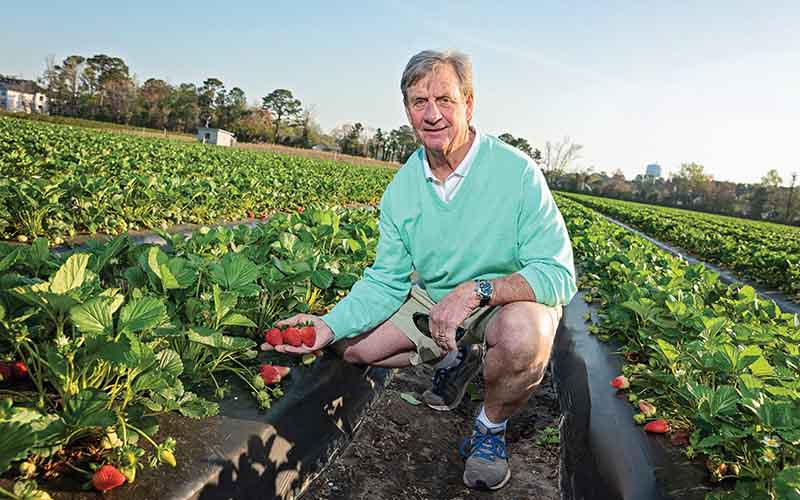 Long before the N.C. Azalea Festival blossomed, another plant marked the start of spring in the Wilmington area: strawberries. The plant’s juicy fruit not only was popular at dinner tables, strawberries were part of a thriving local business known as truck-farming.

Instead of being sold only in local markets, strawberries and crops such as lettuce, cabbage and melons were shipped to distant markets, usually via truck to a rail depot, where refrigerated train cars transported them to cities along the East Coast. The proliferation of agriculture in California and its year-round growing season took a huge bite out of truck-farming in the Wilmington area, and the industry slowly faded.

As many farmers in Southeastern North Carolina turned to tobacco or left the fields altogether, one local family remained true to its truck-farming roots. A century later, the berry business is thriving in northern New Hanover and southern Pender counties as another spring harvest season is underway at Lewis Nursery and Farms.

“In Wilmington, we have a retail operation that encompasses a garden center selling spring plants, flowering plants, hanging baskets,” Lewis said. “It coincides with the ripening season of our strawberries, so they kind of go hand in hand. My wife manages that along with some very capable friends and assistants and my nephew.”

More out of sight is the Lewis Farm wholesale operation in Rocky Point.

“We farm 350 acres of blueberries, 125 acres of strawberries and 55 acres of blackberries,” Lewis said. “And that’s all for wholesale and distribution to retailers throughout the East Coast primarily.”

That’s a strategy that harkens back to the region’s truck-farming days, which also included a big business in cut flowers.

Although the Lewis Farm story is partly one of heritage and family (the current farm dates to 1953 and was in other parts of the Lewis family before then), it’s also a story of innovation. California still dominates the U.S. produce market (including strawberries) but by adapting a mix of novel farming techniques, Lewis and others in Southeastern NC have carved out a niche in the modern-day berry business.

“We basically are the only strawberry farmers left here,” Lewis said. “We maintained operations when most people, most retailers, migrated to California for their fruits and vegetables. We maintained ours and have had a comeback over the last couple of decades because people are wanting more local, regional produce, and we’ve developed techniques to grow them on a longer-season basis.”

With a longer season and a consistent, quality crop, the farm’s wholesale berries are now found in stores such as Food Lion, Lowes Foods, Whole Foods, Fresh Market, Walmart and, occasionally, Harris Teeter.

Although California and Florida dominate the strawberry market, North Carolina is consistently among the top 10 states for blueberry production, with most of the crop grown in Southeastern North Carolina. For about a six-week period in May and June, the state is producing the majority of the nation’s blueberries, Lewis said. His farm will produce 3.5 million pounds during that stretch.

“They go all over the country under our brand, American Blueberries,” he said.

While most are sold for fresh consumption, berries that don’t make the cut (too much rain, for example, can cause overripeness) are sold for use by food processors.

Although the success of Lewis Farm is rooted in the traditional area crops of strawberries, blueberries and blackberries, the migration of Northeasterners to the region has opened a new market that Lewis is eager to fill – raspberries.

“We had a goal of producing all four berries here in Eastern North Carolina like they do in California: strawberries, blueberries, blackberries and raspberries,” Lewis said. “But our climate didn’t allow us to do much with raspberries.”

That has changed, however, with a new technique known as “long cane production,” which produces fruit in the plant’s first season and in quantities large enough to make it a profitable crop.

“That’s a new venture we hope to expand on. We’ve got a lot of Northern people in our community who love raspberries and are used to raspberries,” Lewis said, adding that they are his favorite berry to eat.

As with other businesses, Lewis Farm had to make adjustments in the wake of COVID-19. But, Lewis said, the pandemic has not hurt business.

“It [2020] was a really good year for us. We adapted and made adjustments to our operations to conform to the needs of the consuming public,” Lewis said.

“And we were a food producer, we were essential, and people flocked to our place to get outside. And so we did fine. We did really well, actually. And this year we’ve got a little more of a repeat of that (the uncertainty and adjustments), but not quite as severe.”

With the recent spate of warmer weather, the spring strawberry harvest is kicking into high gear. Lewis strawberries started showing up in local grocery stores the weekend of April 10, and blueberries will follow in late May.