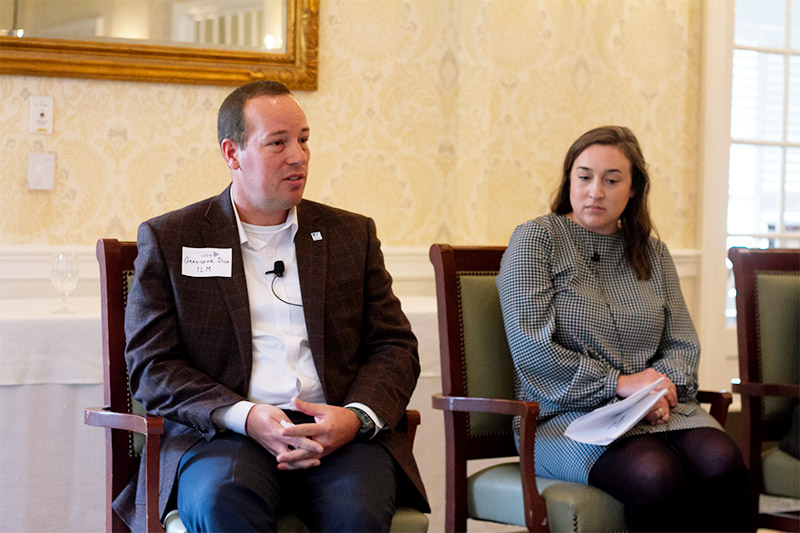 Granseur Dick and Meaghan Dennison address the audience at the Cape Fear chapter of Commercial Real Estate Women's luncheon Thursday. (Photo by Johanna F. Still)
During a recent discussion centered on the local job market, panelists were cautiously optimistic about the year ahead.

On Thursday, the Cape Fear chapter of Commercial Real Estate Women (CREW) hosted a luncheon featuring a panel focusing on the theme, “The Jobs Picture for the Cape Fear Region.”

Guettabi began the program by catching the audience up with the city’s recent economic cycles, having come out of the pandemic as a “beneficiary” – one of the few communities nationwide that saw a surge of growth.

Until very recently, the region’s labor market had remained stubbornly strong. “There are really no big signs of the labor market crack,” Guettabi said. However, citing Wednesday’s news that locally headquartered fintech firm nCino is cutting 7% of its staff and other national layoff announcements, Guettabi said, “We’re starting to see maybe the beginning of these cracks.”

The firms within sectors most sensitive to the economic downturn “seem to be either companies that either have a lot of reliance on borrowing,” he said, or are industries “very close to real estate.”

Given the fed’s inflation-quashing mandate, Guettabi said questions surround when and how dramatically consumer demand will dip, despite excess savings built up during the pandemic. “There is evidence that we're starting to exhaust some of those savings,” he said. “And then there is now this early evidence of firms starting to respond to the higher interest rates through some of the layoffs that have been announced nationally, and now obviously, locally as well.”

Guettabi said the conditions give way to a million-dollar question: “Can we get inflation under control without doing a ton of damage to the labor market?”

Deputy airport director Granseur Dick said ILM seems to be a bellwether for what’s happening in the local economy. ILM officials get a sense of the industry’s strength by observing the decisions carriers make, Dick explained. “They're making their business decisions to add service to [a] new location in Wilmington. And they're adding larger aircraft,” he said.

2022 was a banner year for ILM. With the addition of its first low-cost carrier Avelo Airlines, and the announcement of a second low-cost carrier, Sun Country Airlines, set to operate this summer, the airport offered travelers leisure-centric options for the first time. “We're asking ourselves, is it just because … the airlines' decision-makers are understanding our market a little better? Or is it part of that growth that we're seeing as a community?” Dick said.

Traditionally, ILM’s business travelers made up a bulk of its traffic, at about 70%, he said. Though a study hasn’t yet been performed, Dick estimated leisure travel at ILM has since crept up to 35% or 40%.

Comparing seat numbers for planned flights submitted by carriers scheduled for the first few months of 2023 vs. the same time last year, Dick said the new figures are higher. "That's exciting for us," he said, "because as we're looking at developing our tourism economy here locally, we think that sort of indicates more growth in that shoulder season." The boost could also be indicative of a surge of remote workers traveling for business or personal reasons, he said.

"We've seen rapid growth; we figure it will probably slow at some point," he said. "We think 2023 will probably be another record year as long as those cracks don't open too widely too [quickly]."

Guettabi asked panelists for their outlook on the year ahead.

Live Oak Bank chief experience officer Courtney Spencer said a slowdown in hiring is likely. “Given that there are these headwinds… let's be prudent with our upcoming decisions about hiring,” she said. “The last thing we want to do is given that we’ve created a capacity for ourselves from the recent growth, is be in a situation where we end up growing too quickly, and then having to make an unfortunate decision.”

Remote work isn’t going anywhere, Spencer said. The pandemic highlighted “the need for flexibility in the workspace, for all employees, but especially for working parents and caregivers in general,” she said. “That's not going to change.”

About 75% of Live Oak Bank’s local workforce checks in at some point to the Wilmington campus in-person daily. Spencer said bank officials are trying to study what’s driving workers' decisions to come into the office. A likely draw is the firm's luxury high-end amenities, she said, including two restaurants and a fitness facility.

“It's going to be important that flexibility continue to be a recipe for an organization that is looking to maintain an engaged workforce,” Spencer said of remote work.

Cape Fear Collective CEO Meaghan Dennison said while headlines about the area being a top move-in place for relocation are markers of growth, “my mind immediately goes to the folks who we are leaving behind in our community today that can't take advantage of that, and will be pushed out,” she said.

Dennison cited a U.S. Census tract in the city’s southside that falls in the nation’s top 25th percentile for children living 200% below the federal poverty line. “If we're not building the education pathways and the economic mobility support for individuals in that Census tract today, we can grow all we want, but that Census tract will no longer exist,” she said. “It will have to be gentrified.”

Tech leaders have taken steps to remove barriers to filling high-need roles, Dennison said, like mutually agreeing to drop requirements for a four-year degree in some instances. The onus is on leaders in the private sector to present education-related labor solutions to local institutions, she said. “Shorter term, high-impact trainings that are tied to a specific job” can have the greatest impact, she said.

Asked where the fed might land on an interest rate in the coming year, Guettabi said he anticipated it would settle at about 4% to 4.5%. “The days of 2% inflation and 2% interest rates are gone,” he said.