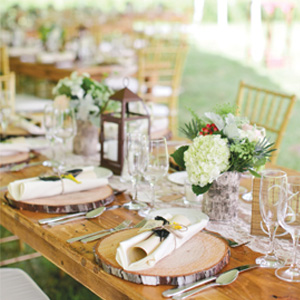 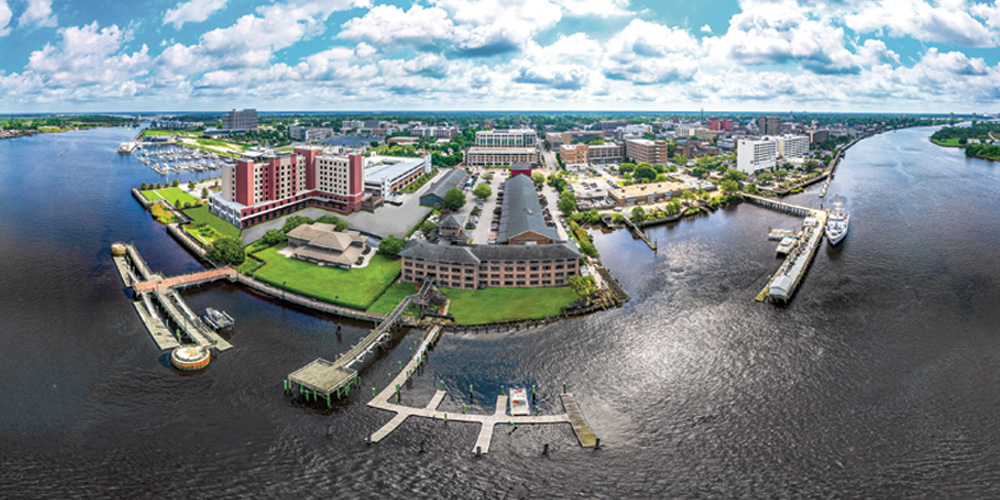 The Wilmington Convention Center is more than just a building – it’s a destination.

That’s how Connie Nelson of the Wilmington and Beaches Convention and Visitors Bureau (CVB) sees the downtown event venue these days, and her colleagues would certainly agree.

That’s because a surge of commercial development in recent years centered around the 107,000-square-foot Wilmington Convention Center – the largest facility of its kind on the North Carolina coast – has given rise to what’s been appropriately dubbed the Convention District.

“As people learn more about what we have to offer, there is more interest in having events here,” said Nelson, CVB’s Communications and Public Relations Director.

Connected by nearly 2 miles of scenic Riverwalk along the Cape Fear River and surrounded by hotels, smaller event venues, a marina and pier, restaurants and performance halls, the Wilmington Convention Center offers not just a space to hold events but a place to which people want to come and stay a while.

In August, the N.C. Healthcare Engineers Association (NCHEA) held its conference at the Wilmington Convention Center, the second time since 2014. But this year, with many more accommodations to choose from, NCHEA’s conference had record attendance.

While the area has never lacked Southern hospitality, it was previously missing one critical component to booking large events.

“People like coming to Wilmington, but some groups wanted to have nearby hotels and we didn’t really have that,” said Elaine Tricarico, Wilmington Convention Center’s Senior Sales and Marketing Manager.

That changed with the opening of three new northern downtown hotels: Courtyard by Marriott in 2014, followed by Hampton Inn in mid-2017 and Embassy Suites later that same year.

Those added about 400 new rooms to a portion of downtown already supported by the 272-room Hotel Ballast and the 53-room Best Western Plus, attached to the Coastline Conference & Event Center. The 47-year-old Hotel Ballast, formerly Hilton Wilmington Riverside, recently underwent an $8.5 million makeover and rebranding effort.

And construction on yet another hotel – Aloft, a 125-room, seven-story building at the Coastline Conference & Event Center – is expected to be underway soon.

Putting The District On The Map

The spike in accommodations has made an impact. Case in point – the N.C. Realtors Association Conference and Expo in September at the Wilmington Convention Center. Tricarico said the statewide organization – whose event brings 800 Realtors and approximately 200 of their guests to the area – wasn’t able in the past to choose Wilmington as a location. 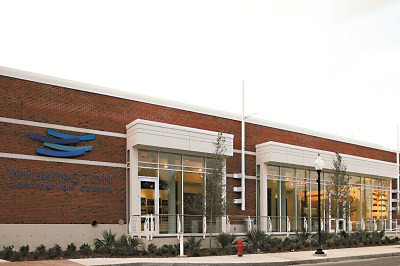 “Conventions and conferences that once could not consider Wilmington are now interested,” Tricarico said.

That includes the N.C. Department of Public Transportation Association, which, for the first time, picked Wilmington as the spot for its 2018 conference in April.

So many rooms to choose from makes an event planner’s job that much easier, CVB President and CEO Kim Hufham said. The CVB helps coordinate events and accommodations by sending leads out to the area hotels, which then will block off a certain number of available rooms, allowing event planners to spread out attendees through numerous hotels, if needed. Most of the hotels will also coordinate with each other to handle any overflow. 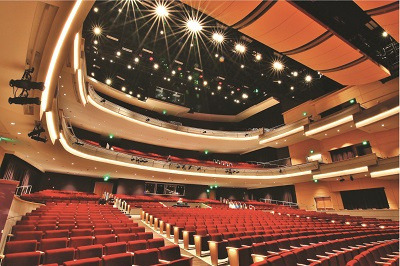 Add accommodations to the growing list of available entertainment and recreational activities and proximity to the Wilmington International Airport and local officials say the future looks bright for the burgeoning convention district.

Coming For Work, Staying For Play

The convention center is not only booking more and bigger events but is also booking them further in advance.

Organizations are drawn to the area, Wilmington Convention Center General Manager Fredia Brady said, by more than just amenities and facilities (the convention district also includes a number of smaller event facilities, including Coastline Conference & Event Center). Those support the event itself, but the city’s offerings appeal to conference- 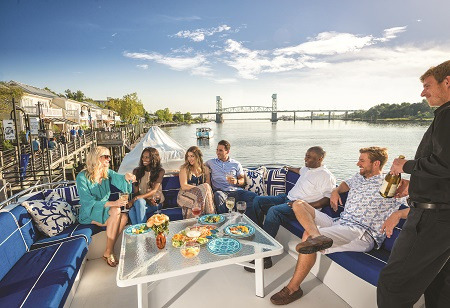 goers, who can roll business and pleasure into one destination.

That, says Brady, has everything to do with downtown Wilmington’s charm.

“You can go into any downtown in any city and see the same brick and mortar. But Wilmington is different. We’re more than that; we have the Cape Fear River and our proximity to the beach,” she noted.

The NCHEA conference offered up some rooms at the Blockade Runner Beach Resort in Wrightsville Beach, for example, Tricarino said, because some attendees decided to come early or leave a few days later and turn the trip into a vacation, as well.

That translates into economic impact far beyond the Convention District, Brady said. It supports jobs and creates new ones. It means the convention center can balance large outside events with smaller happenings. And it likely means more to come in terms of commercial development in northern downtown Wilmington. 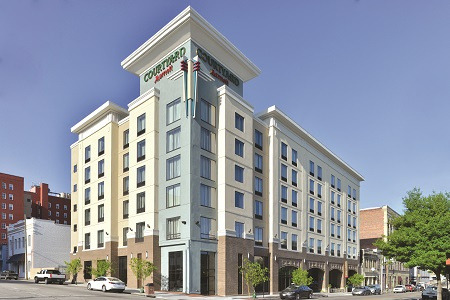 “It creates that compression with the city if groups are coming and staying at our hotels and down at the beaches,” Brady said. “They’re staying and spending their money throughout Wilmington, and that’s only going to increase in the future.”