It was the early 1920’s and the grass strip located between present-day Floral Parkway and Audubon Boulevard attracted many aviation enthusiasts and military planes.  It’s hard to imagine that what started almost 100 years ago has now evolved into ILM.  To appreciate how much ILM has grown, I’d like to revisit Bluethenthal Field and the history of ILM.

By the mid 1920’s, Wilmington had already outgrown that small grass strip and early aviation enthusiasts such as Neal Kelly Sr., Denyon Woody, Jack Orrell and Warren Pennington went before the County Commissioners and proposed that the county build a landing field on a county-owned tract of land near Gordon Road.  By May of 1927, J.L. Becton, civil engineer, began to stake out the new airfield – to include two runways, one 1700 x 230 feet, and the other 1750 x 230 feet.  The first landing on the new airfield was made in 1927 by Warren Pennington who flew down from Rocky Mount in an American Eagle airplane.  On May 30, 1928, Memorial Day, the field was named Bluethenthal Field in memory of Arthur Bluethenthal, first Wilmingtontonian and second North Carolinian to be killed in WWI.

The airport’s steady growth and improvement began in 1929 when Coastal Plains Airways began operations.  By 1941, the airport covered 634 acres and several airlines were bidding to include Wilmington in their routes.  During WWII, military flight training was set up at the airport through the National Civilian Pilot Training Program.  On December 8th, 1941, the Army Air Corps moved onto Bluethenthal Field and remained for the duration of the war.  At its height, the airport offered a complete bomber command station and facility support including a hospital and administrative offices.  After the war, the federal government declared Bluethenthal Field surplus property, and under the Surplus Property Act of 1944 the facility was deeded to the county at no cost to New Hanover County.

In 1950, a large modern terminal building replaced the existing wooden one and a control tower was built.  By 1968, runway renovations were approved to accommodate Boeing 737 jets.  A 1975 file speech to the Exchange Club of Wilmington recaps investment at the airport since 1941 including $11M by the Army Air Corps, $6M by the FAA, $3M by the Navy, $2.6M by the Air Force and $1M by the county.

After years of discussing the need, the county and Airport Commission, in 1980 authorized a concept study for a new terminal complex, also known as the present-day terminal.  In 1989, the General Assembly ratified NC Chapter Bill 404 and Senate Bill 410, enabling the county to establish an official independent and autonomous Airport Authority.  The bill authorized the County Commissioners to appoint an authority of five members.  On July 1, 1989, a lease was signed between the county and the Airport Authority authorizing the Authority to lease and manage the airport.  On September 15, 1990, the new 88,000 square-foot terminal was dedicated.

From that initial grassy strip on Floral Parkway to the current runways, ILM has come a long way over the years.  Our growth, however, is far from over.  ILM is currently researching ways to expand for the future.  These plans may include terminal, parking, runway, and jet bridge expansions and renovations. In addition, our plans for the ILM Business Park are well underway.

The early aviation enthusiasts previously mentioned may have never thought their hard work and dedication would have evolved into such a key economic player in this region.  They refused to give up on their plans for aviation development and we share in their passion.  As the 4th largest airport in North Carolina, we will continue to grow and further the aviation presence in southeastern North Carolina, a concept that has well preceded our time at ILM.

Jon Rosborough became director of the Wilmington International Airport (ILM) in November of 1998.  As the fourth largest airport in North Carolina, ILM serves over 800,000 passengers annually and offers service on both Delta Airlines and US Airways/American Airlines, ILM services 4 non-stop hubs which allow for convenient domestic and international travel. ILM prides itself on offering award winning customer service and convenience with multiple flight options, easy security screening, and close parking.  For more information about ILM, please visit www.flyILM.com, like us on Facebook:www.facebook.com/flyilm, or follow us on Twitter at https://twitter.com/ILMairport. 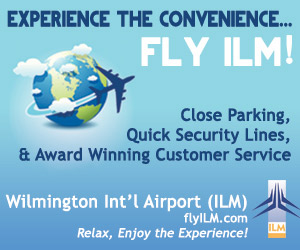