A North Carolina Without Beaches?

It’s difficult to picture North Carolina without its wide and inviting beaches that host visitors from across the country. But that may be the reality we will face if a sustainable statewide shoreline funding mechanism for beaches and coastal storm damage reduction projects isn’t created.

Since federal funding for coastal storm damage repair is diminishing, coastal counties are struggling to maintain beachfronts. Why should someone living in Charlotte or Greensboro care about beach erosion? The reasons are many and reach far beyond the simple argument that families from all parts of the state vacation in beach communities up and down the North Carolina coast.

There are hard numbers as to why our beaches are an economic engine that must be nurtured. A study commissioned by the N.C. General Assembly last year found that direct expenditures generated by beaches and inlets amount to $2.5 billion annually. When multiplier effects are added, these numbers rise to $6.1 billion. The beaches support almost 65,000 jobs and the total state tax revenue averages $188 million a year. The recreational consumer surplus resulting from beaches and inlets is over $214 million.

From a local perspective, the study found that in 2013-14, Wrightsville Beach had nearly $104 million in direct economic impact from recreational activities and hotel stays. In Brunswick County, Ocean Isle Beach generated $50.4 million and the three towns on Topsail Island combined for more than $71 million.

It’s also interesting to note that the study found that 42 percent of the total property value in coastal counties is owned by residents who do not live in those counties. More than 8,000 residents in Wake County own property on the North Carolina barrier islands. By comparison, only 7,955 residents of New Hanover County own coastal property.

The state has updated its Beach and Inlet Management Plan (BIMP), which aims to preserve and enhance the value of our coastal resources through the development of a management strategy. The BIMP findings justify the economic basis for the development of a state dedicated coastal storm damage repair fund, which would range between $20 and $30 million, with a minimum target of $25 million.

The study undertaken by the General Assembly proposed several possibilities to create this $25 million pool annually, ranging from a .5 percent seasonal tax in the coastal counties to a new state property tax on property owned by non-state residents, which could generate $26.4 million. Reallocating 50 percent of the state’s portion of a short-term lodging tax was also proposed, as was a one percent meals tax and additional land transfer fees in the 8 coastal counties.

Determining the best source for the fund will be the responsibility of the General Assembly, and may not resemble any of the options mentioned above. But it will be the responsibility of the coastal communities to educate legislators that without effective planning, management and investment in shoreline infrastructure, the future of the state’s coastal communities and a significant part of the state’s economic base could be adversely affected. The N.C. General Assembly has successfully established a funding mechanism for North Carolina’s shallow draft inlets, so this would not be a new concept.

It is a necessary governmental responsibility to properly manage and protect North Carolina’s assets, including beaches. Good planning is needed to assure a cost-effective and equitable approach to beach management and restoration. North Carolina is renowned for its 326 miles of ocean shoreline and barrier islands that are enjoyed by millions and that provide billions in economic value through business and tourism, as well as residential and commercial property value.

The Wilmington Chamber, area elected officials, our partners at BASE, other coastal chambers and area stakeholders are making this a priority issue. The Chamber has formed a committee to focus on creating this critical funding mechanism for this statewide economic asset. As we develop our calls to action, we hope you will join us in spreading the word to those who aren’t familiar with the issue or its importance. A North Carolina without superb beaches is not a future we can imagine or afford.

Other Posts from Natalie English

Chamber Members Must Use Their Voice During Elections by Voting for Pro-business, Pro-jobs Candidates

Becoming a Breakout City: Bring on the Remote Workers

MODERNIZE OUR DOWNTOWN LIBRARY AND MUSEUM

Advocacy: The Heart of the Chamber

A Strategic Plan for Community Prosperity

Join Me In Leadership Wilmington 2018

The Championship Is Over… Now What? 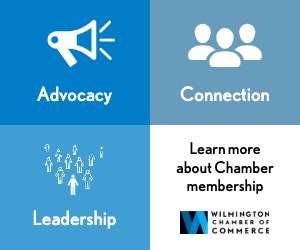