In a recent press release from the Federal Open Market Committee, the tone is cautiously optimistic. Littered throughout the release is the word, “however.” Things are good, but other things are bad. Also, some factors are positive, yet be mindful: Others are negative.

Before I get lost in the semantics, it’s worthwhile to note the following: “Household spending has been increasing at a moderate rate, and the housing sector has improved further; however, business fixed investment and net exports have been soft.” Moreover, job gains have been strong, the labor market has witnessed a degree of strengthening, and inflation has been rising.

But the Fed points out that inflation levels are still hovering underneath their objective for the long-term, which is 2 percent. This is partially a result of the decline in energy prices, as well as the prices of non-energy imports.

For those with the work ethic or knowledge to decipher the academic jargon contained within the release, the message was clear. The Fed believes that recent analyses of economic data show that everything is basically alright, but there are storm clouds on the horizon. One of the main reasons the Fed thinks there could be trouble in paradise is the worry about “global economic and financial developments,” also known as the drop in oil prices and the effect that has had on micro- and macro-economies.

Simply put, corporations and countries affected by the price of oil have had some of their toughest years in recent memory. This is making the Fed a little gun-shy about increasing interest rates in the short term.

Considering that the Fed is forced to walk a tightrope when it comes to its communications, it’s easy to see why it could be viewed as non-committal. Approach the negative too closely, and markets react negatively. Stray too close to the positive and people will ask why rates were not increased.

The Fed’s conclusions support this point, since it expects that “economic conditions will evolve in a manner that will warrant only gradual increases in the federal funds rate; the federal funds rate is likely to remain, for some time, below levels that are expected to prevail in the longer run. However,” (there’s that word again) the actual path of interest rates will depend on economic data made available to us moving forward.

Thus, the Fed leaders move away from the point they made in the previous sentence, making everyone aware they will adjust their fighting stance to match the condition of the economy as it changes. In essence, Fed leaders are letting everyone know they will do their job.

The takeaway is that the Fed is deciding to keep short-term interest rates low. The chart below shows that bond traders were happy with the Fed’s decision, so they bought bonds and prices went up. When bond prices increase, interest rates go down, and this is a cause for celebration for anyone who might be shopping for a home. 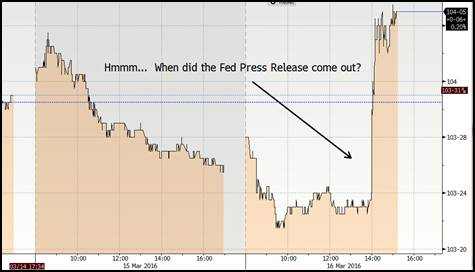 For a free consultation about what this means for your purchasing power, contact me at the number below.

Patrick Stoy (NMLS Numbers 39527 and 39166) has 16 years of mortgage lending experience. Patrick is CEO of Wilmington-based Market Consulting Mortgage, which he started in 2005 with a mission to build lifelong customer relationships by providing real value. To learn more about Marketing Consulting Mortgage, visit www.macmtg.com. Patrick can be reached at [email protected] or (910) 509-7105.

Other Posts from Patrick Stoy

Is Wilmington A Good Long-Term Investment?

The Numbers Don’t Lie: Buying Is Better Than Renting

Get A Leg Up On Savings With An ARM

Proven Techniques For Protecting Your Identity

What To Avoid When Buying A Condo

Change In Credit Bureau Reporting A Win For Consumers

Trump vs. Dodd-Frank And The Down-Payment Myth

Is The Housing Bubble About To Burst?

What You Should Know About Home Equity Loans

How To Beat Rising Interest Rates

How To Keep Minor Problems From Becoming Major Headaches

How to Ensure Buyer Deposits are Protected

Why Now Is The Time To Buy

Don’t Let NC Closing Costs Be A Barrier To Homeownership

Renovation Loans On The Rise In Hot Real Estate Market

Strategies For Saving Money When Refinancing

How to Overcome A Credit Dispute

Why It’s Risky To Make A 20 Percent Down Payment

Strategies For The Self-Employed To Secure Loans

Mortgage Rate Shoppers Are At Risk Of Missing Out

Millennials Capitalizing On The Benefits Of Home Ownership

ECB Stimulus Could Spur A Decline In Mortgage Rates

TRID Implementation Squarely In The Rearview

Cash Flow Is The Chief Advantage To Buying Rental Properties

How To Purchase A Home: The Practical Steps Everyone Should Know

Follow Up: Consumer Reports Revises Its Opinion About Mortgage Brokers

Small Mistakes Can Make A Huge Impact On Credit Scores

Finding The Right Mortgage Broker Is Key To Understanding Your Options

FHA Cuts Mortgage Insurance Premiums … But What Does That Mean?

Will Being Self-Employed Affect My Ability To Secure A Loan?

Use of Technology In Financing Delivers Hassle-Free Transactions

Government Is Easing The Flow Of Housing Credit

Potential Changes To Flood Insurance Rules A Win For Homeowners

What Is Mortgage Insurance?

What Will Rates Do When Quantitative Easing Ends?

How Technology Is Streamlining The Mortgage Loan Process

Is “Paying Yourself First” A Good Idea?

Buying And Selling A Home In A Rising Real Estate Market

How To Get A Perfect Credit Score (Part 2 of 2)

How To Get A Perfect Credit Score (Part 1 of 2)

The Value Of A Knowledgeable Real Estate Agent

The Lowest Mortgage Rate Is Usually NOT The Smartest Choice

The Impact Of Qualified Mortgage Requirements

Do You Have A Plan If Flood Insurance Premiums Skyrocket?

Transforming Your Largest Debt Into a Revenue Stream

Don’t Let Fear Keep You from a Better Financial Future