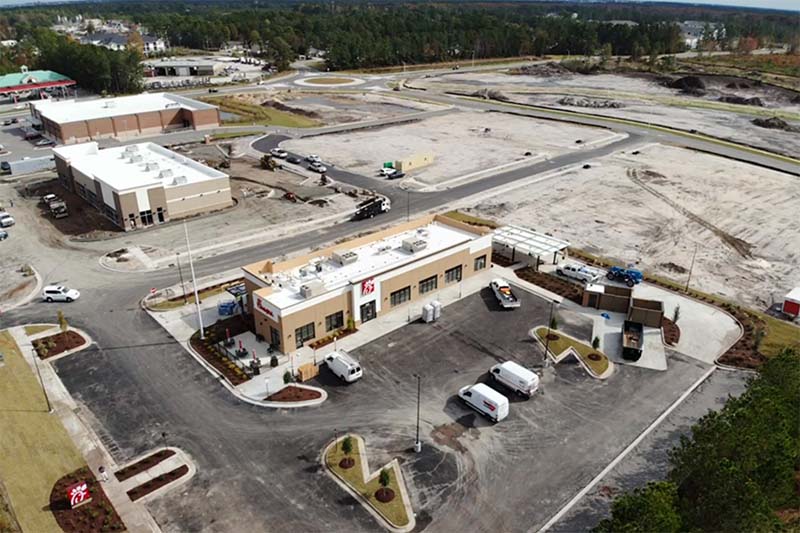 Lowe’s and property owner C&S Commercial Properties reached a deal at the end of June, according to Palmer Williams, vice president of the Fayetteville-based development firm.

Lowe’s Home Centers LLC submitted plans to the town last year for a 113,860-square-foot building with a 27,720-square-foot garden center. The town issued the project a preliminary zoning approval at the end of 2021, according to a town spokesperson.

Construction on the project began last week, according to Lowe's spokesperson Larry Costello. "This is a prototypical Lowe’s store with tool rental," he said. The store is expected to open in the second half of 2023, according to Costello, making it the fourth location in the Wilmington area.

Aside from the home improvement store – the town’s first – Leland Town Center has also landed Leland its first stores from other notable retailers, including Chick-fil-A and Starbucks. Other tenants at the development include Dental Care, Firehouse Subs and AT&T. Carolina Shores Car Wash recently purchased a parcel that was part of the original development, according to Williams.

Construction on two additional strip buildings behind Starbucks will begin in the next few months. The buildings, at 10,000 and 4,500 square feet, are slated to be completed by summer 2023, Williams said.

The firm recently signed a lease with HOTWORX, a 24-hour infrared fitness center with stores across the U.S. and three in Wilmington. HOTWORX will move into the smaller strip building upon completion. “We are getting strong activity from restaurants, retailers and service uses for these buildings and look forward to announcing new businesses coming to Leland very soon,” Williams said.

Williams said his team has been working diligently to start the next phase of development at Leland Town Center “despite off-site road improvement obstacles as a result of a financial partnership the town officials were making with another developer to complete their off-site improvements.” A Leland spokesperson said the town wasn't aware of any obstacles created for C&S Commercial associated with the planned road improvements.

This spring, the town entered into an agreement with the developers of the adjacent but unrelated Leland Corners. Town officials opted to request enhanced road improvements, a single-lane teardrop roundabout at the intersection of Ocean Gate Plaza and New Pointe Boulevard, to address concerns about traffic safety in the area.

In February, town council agreed to pay and install the improvements that go beyond what was required of the developer. The developer, a subsidiary of Twin Rivers Capital, will pay the town $94,554, representing the cost of road improvements they would have otherwise been required to install. A town spokesperson said the total cost the town will pay is unknown as the project is in the design phase.

For the adjacent Leland Town Center’s part, Williams said C&S Commercial was tasked with enhancing Highway 17, installing Gateway Boulevard with a double-lane roundabout, creating a Tradeway Drive connection and widening Ploof Road. Soon, the team will add another roundabout and median to Ocean Gate Boulevard, he said, adding the road improvements all took place “without any assistance from taxpayers.”

“We hope to minimize disruptions caused by construction and alleviate long-term traffic concerns of the nearby residents,” Williams said. “We look forward to the future of Leland Town Center and are excited to bring the residents new businesses that they have long desired.”

Amazon says Pender delivery station still on the way; no timeline given

Nominations for real estate awards due in October

What's next for county's P3 projects