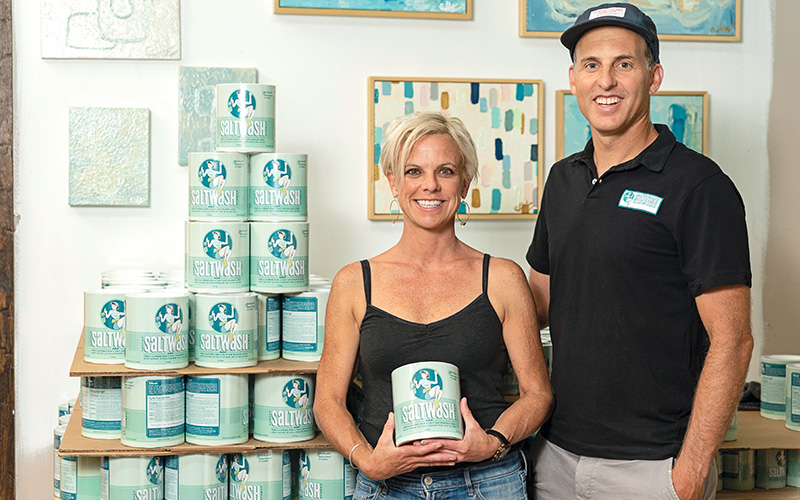 Carol and Jamie Hunter came up with a recipe for a powdered formula that can be added to paint to create a weathered, rustic or vintage look. (Photo by Michael Cline Spencer)
Tucked away in a discrete warehouse off Oleander Drive, a husband-and-wife duo makes and packages a product sought after by DIYers around the world.

Saltwash is a powdered trademarked formula that can be added to paint to create a weathered look on furniture and other items. The secret recipe – which includes sea salt, the only ingredient disclosed – is crafted and poured into cans for distribution in the Wilmington warehouse by Jamie and Carol Hunter.

“Jamie and I do everything,” said co-owner Carol Hunter. “We have an auger that we mix all the ingredients in with specific ratios. We fill each can by hand. We package everything, and we ship it out all over the world.”

In 2010, the couple was spending time at art markets selling products from their joint home decor line, Saltwater Salvage Designs. Before creating Saltwash, they would scope out historic homes set for demolition to salvage pieces to be incorporated into new designs, seeking out a particular weathered, rustic look. Eventually, interest in purchasing this type of wood piqued, and finding it became more expensive and difficult, Carol Hunter said. Plus, continued exposure to lead-based paint had the couple thinking twice.

“Once we kind of got a little weary of that, we thought, ‘We’ve got to figure this out or we’ve got to do something else,’” she said.

Sanding down painted wood wasn’t creating the same effect the couple had previously hunted for. “What we were missing was all those layers of paint and all that texture – that really authentic look,” she said. “We needed to replicate and figure out how to get that look.”

The Hunters toyed with formulas in their garage and began using a version of what later became Saltwash to recreate an antique feel. Pieces for their décor line crafted using this formula attracted attention at markets, Carol Hunter said. “People were blown away,” she said. “So we thought, ‘Let’s package this.’”

Using taped-on labels drawn by Jamie’s cousin, the couple filled cans with their Saltwash recipe and placed them on a small corner booth at a market. A Rosie the Riveter-esque pinup logo with a signature turquoise blue caught plenty of eyes.

“The next market, our art was in the back corner and all the Saltwash was in the front,” she said. “We realized that’s where we needed to put our focus into because it was getting a lot of interest and gaining traction fairly quickly.”

With their priorities shifted, the Hunters quickly moved to submit applications to the U.S. Patent and Trademark Office. They were eligible for a patent, but because doing so required disclosing the full recipe, they opted to seek only a trademark, granted in 2016.

Early on, competitors even reached out under false pretenses, acting as a customer asking about the formulation to check for “allergy concerns,” Carol Hunter said. “People were on our heels … We knew to stay ahead. To try to keep up with these big companies, we needed to move fast.”

During their first year, Jamie Hunter said they hand-filled 400 cans. After purchasing a machine to help fill the cans, the couple sold 10,000 by their third year.

“We experienced our highest growth rates during those first three years,” he said.

Growth continues at an organic pace; online arts and crafts creators with large followings regularly share videos using the product. One of the original “sharks” from Shark Tank partnered with the team in 2017, and HSN featured the product in a segment in 2020.

With support from the Economic Development Partnership of North Carolina, Saltwash landed a distributor in Ireland, which helped spur its growth in Europe. “That first year we grew from selling to nobody to being in 50 stores,” Carol Hunter said. Today, she said Saltwash is sold in about 200 stores in the U.S. and roughly 200 internationally. About half of all sales come from retailers and half are direct-to-consumer from the brand’s online shop.

One of her favorite qualities about the product is how easy it is for beginning crafters to use, Carol Hunter said. “It doesn’t take somebody who’s really experienced to use the product, and you don’t have to be somebody who’s always painting and always crafting and DIYing,” she said. “It can be very satisfying.” 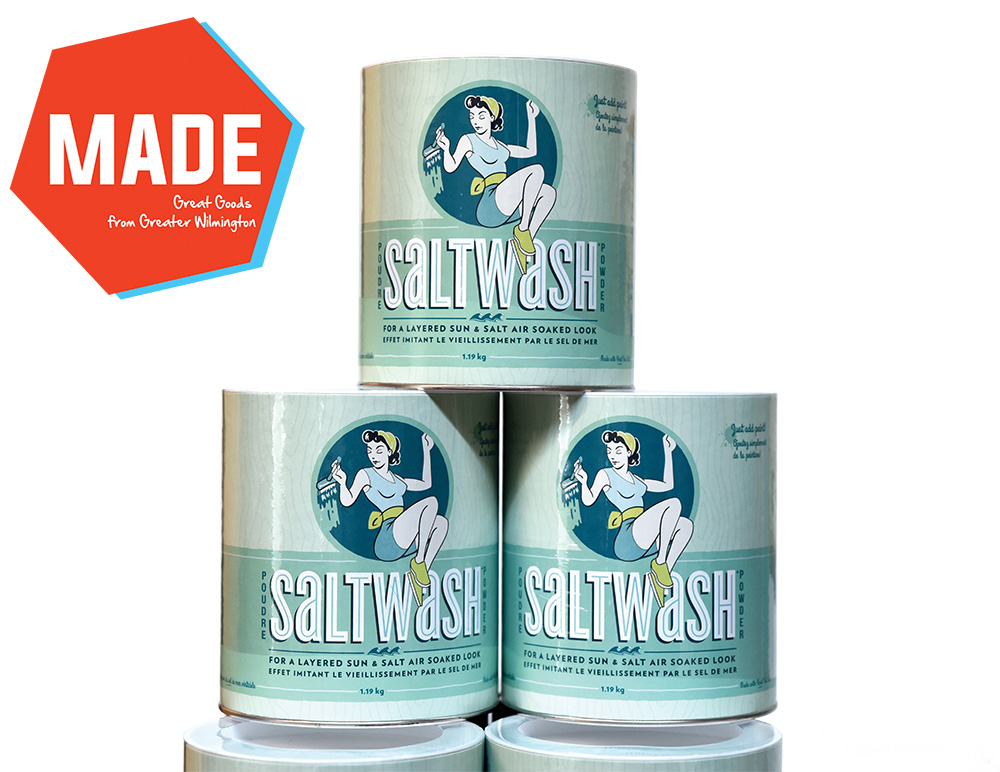 Products made locally: The original product, Saltwash’s powdered paint additive, is made and packaged in the Oleander Drive warehouse. Saltwash offers various sizes, kits and accessories.

Product distribution: Carol Hunter: “We have distributors set up in Europe, in Australia, Dominican Republic, New Zealand – we have a lot of distribution.”

What made the company decide to make its goods locally? Hunter: “When you’re starting out small and you’re a small family business, it was cheapest for us to work right out of our garage ... Eventually we grew out of the garage and we expanded, we started doing sales worldwide basically, and so we looked for bigger workshops. It’s so nice to be able to work in Wilmington … We’re fortunate to be able to make it work here.”

What’s your target market? Hunter: “Furniture flippers, a lot of DIYers, crafters, furniture painters using it to create different faux effects. Anything along that creative market outlet for anybody. It’s easy to use so it takes some of the guesswork out of it.”
EDITOR’S NOTE: To be considered for the Greater Wilmington Business Journal’s MADE feature, contact [email protected].

Correction: This article has been updated to correct Saltwash's address.