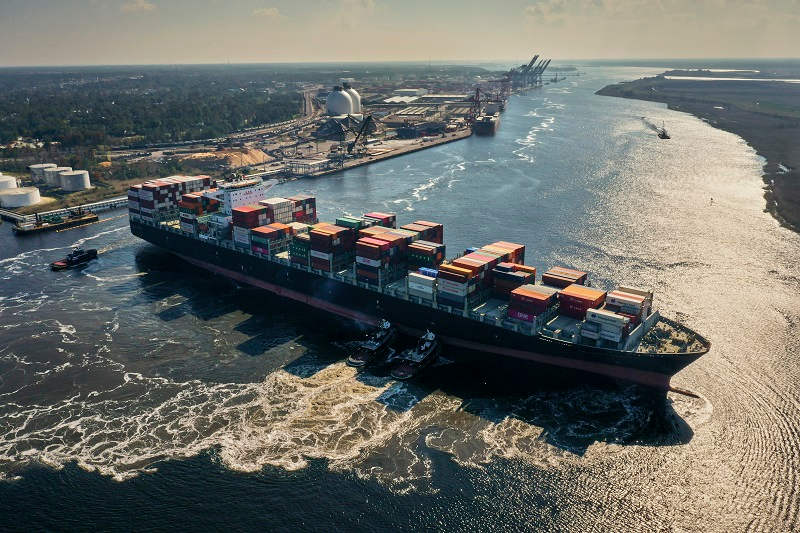 A vessel prepares to head out to sea, making a turn inside the turning basin, which was recently expanded. (Photo courtesy of N.C. Ports)
N.C. Ports has completed the second phase of its turning basin expansion that will ready the Port of Wilmington to serve some of the largest container ships reaching ports along the East Coast, according to a news release.

The capital project widened the turning basin -- just north of the Port of Wilmington in the Cape Fear River -- from 1,400 feet to just over 1,500 feet, officials said. The wider basin allows for these ultra-large container vessels to be serviced by the port, turn around and head back down the Cape Fear River to reach the ocean.

“This is a significant milestone for North Carolina Ports. The completion of this project ushers N.C. Ports and the Port of Wilmington into the big ship era,” Paul Cozza, N.C. Ports' executive director, said in the release. “We recognize the importance of this project to our ocean carriers and are thrilled to offer expanded capabilities to better support their business needs.”

Some ocean carriers have some of these larger container vessels in their fleets. With the expansion of the basin, the port is now able to serve vessels at 1,400 TEUs (20-foot equivalent units), or vessels about 1,200 feet in length, and have enough room for them to turn around safely in the Wilmington Navigational Harbor.

​“This project would not have been possible without the support and collaboration of our local, state and federal partners,” Brian Clark, N.C. Ports' COO, said in the release. “Their efforts helped us ensure the project remained on track especially throughout the uncertainty surrounding the coronavirus.”

The second phase of the expansion is an extension of the initial turning basin expansion project, completed in August 2016. That widening project increased the turning basin from 1,200 feet to 1,400 feet, stated the release.

The recently completed project follows two major projects, which wrapped this year, aimed at improving access for 14,000 TEU ships to the Port of Wilmington.

On top of the turning basin expansion project, the Port of Wilmington in February opened 2,600 contiguous feet of space at its docks, or berth, that allows the port to serve of two ultra-large container vessels simultaneously.

N.C. Ports also completed in January a project that improved the air draft over the Cape Fear River, making access better for large containerships to travel upriver to reach the port.

Wilmington Boat Show plans to cruise into town in October