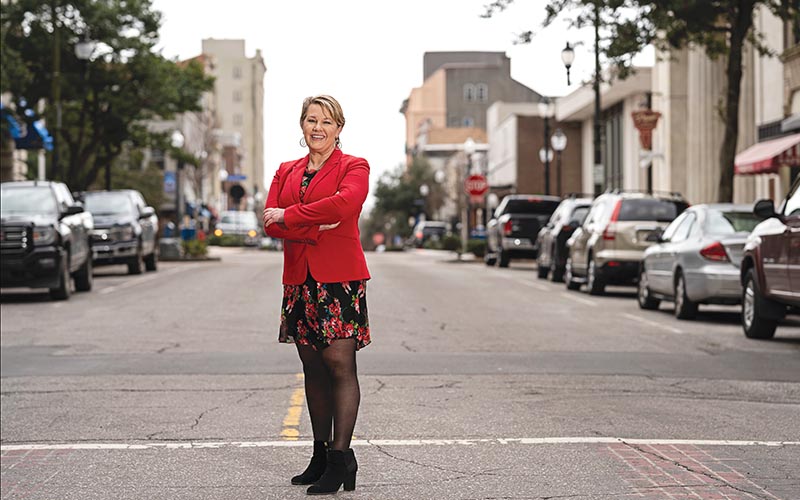 Parks and county facilities are being reimagined, historic buildings continue to be renovated and adapted to new uses, large-scale housing developments are bringing more residents downtown and downtown merchants are thinking in new ways.

So it’s perhaps not surprising that Wilmington Downtown Inc., of which Childs is the new CEO and president, is rethinking its mission and priorities.

“WDI has a long history in this city,” Childs said, noting that its first incarnation, the Downtown Area Revitalization Effort (DARE), was created in 1977. “It grew from revitalizing to reactivating. It was ‘main street’ focused and events focused.”

One of the major events was WDI’s summertime Downtown Sundown concert series, which brought people downtown at a time when the central business district was not a big draw. But times have changed: Downtown restaurants, shops and entertainment venues – as well as the Riverwalk – have turned the area into a destination.

So WDI’s board is ready to refocus.

She explains that this new mission has three “pillars.” One is expanding WDI’s existing services such as loans for small businesses. Another is helping to drive projects that will have significant economic impact. The third pillar is pursuing partnerships that will address issues.

“We are looking at other organizations we can partner with,” Childs said. “A prime example is [working with] Port City Trolley and Wave on what we can do for public transportation, which is critical to downtown development. The North Waterfront Park is the elephant in the room:  need public transportation to serve that. (Read more about Wave Transit’s transportation goals by clicking here.)

“Also, entrepreneurship: How do we raise more companies here? We’re working with the CIE [UNCW’s Center for Innovation and Entrepreneurship] and [new business accelerator] Genesis Block. We need that kind of energy and those kinds of jobs downtown, and we are going to focus on that.”

One new downtown company aligned with that third pillar has taken up residence in a historical building across the street from WDI’s offices. In January, Texas-based Common Desk moved into all three floors of the renovated Gaylord Building, which had stood vacant and boarded up for years. The flexible coworking, office and event space is already luring tenants.

“We have about 15 of our 35 offices already leased out,” said Common Desk community manager Aaron Ellis. “All the tenants will be trickling in over the next couple of months. Several of those companies will grow up and need more room here. That’s the beauty of flex space.”

Ellis said that most of Common Desk’s 19 locations – all except two of which are in Texas – are situated in downtowns, and Wilmington’s Front Street fit that model. Common Desk likes environments where “scrappy enterprises are coming together, creating something big together, revitalizing.

“We want to be part of these enterprises that are coming together and want to be downtown,” he continued. “Downtown is much less of a drinking environment now; it’s a great walkable, livable and now workable space.”

As more people live and work downtown, they walk along the streets of the central business district and notice new businesses.

“There has been a lot of interest,” Ellis said. “People are popping in. The number of tours [of Common Desk facilities] in the last three weeks is astronomical – 35 or 40 tours. Wilmington loves to chat. You can plant a ‘foreign’ brand in the middle of Wilmington and people know about it very quickly.”

Another endeavor taking shape on Front Street is Better Basket, a niche grocery store that will fill the building formerly occupied by Farmin’ on Front. Co-owner and COO Frank Meares said the business will begin handling delivery orders by late March or early April. The space itself will welcome in-store customers later, when remaining construction is complete.

“The store is meant to be a showplace for Wilmington,” Meares said, explaining that it will feature produce, meats and other comestibles from North Carolina farmers unless a food item is not grown in the state.

“It’s a farm-to-table concept. We’ll be teaching people how to use the food,” he added. “They can watch chefs making it. Better Basket will be a mix of grocery store, restaurant and take-home service. We’ll have fresh-made, grab-and-go meals.”

Better Basket is just around the block from downtown’s new River Place, a 12-story mixed-use development that boasts apartments and condominiums as well as commercial space. Residents of River Place, along with residents of Sawmill Point, Pier 33, City Block and other downtown apartment complexes will look for a greater range of retailers and service providers, planners say.

Childs and her board want to make sure those businesses are able to prosper. WDI is hiring for an outreach and marketing staffer who will talk with downtown businesses to learn about their goals and needs.

“We are going to make sure existing businesses are being visited,” she said. “To retain businesses and expand our Metropolitan Services District, we are going to offer direct programs that will help them. We’re hoping for final approval from the city on a microloan program. WDI has had a redevelopment program for years, loans of $50,000 to $100,000. This [microloan program] will be up to $20,000 to target operating expenses over a period of up to five years. For the first six months there will be no payments. This can help businesses rebuild after COVID-19.”

Childs foresees WDI being able to help 20 to 25 businesses in the first round of the microloan program, whose interest rate will be three-quarters of prime.

The Downtown Business Alliance, an association of merchants, hotels, restaurants and bars, is also pushing initiatives to help those businesses recover from coronavirus-related woes. A major effort is to restart the Downtown Alive program, which proved successful in the summer and fall of 2020. With the installation of barricades to create parklets – dining and retail spots in parking places – Downtown Alive allowed businesses to bring their indoors outside.

In partnership with the city of Wilmington, DBA is seeking to replace last year’s barricades with permanent but removable bollards to define the parklet boundaries, said DBA President Terry Espy.

“We’re looking at architectural concepts for the parklets,” she said. “Maybe businesses will be able to lease those spaces from the city for six-month periods.” She added the city of Long Beach, California, has similarly adapted its downtown business models and is sharing the resulting statutes and other documentation with Wilmington.

The COVID downturn has inspired DBA members to think in new ways, evidenced by Historic Wilmington Foundation’s turning its annual historic home tour into a porch tour of historic homes downtown, Espy said. And DBA officials want to see more ideas, so they are setting up brainstorming sessions for their members to ensure that they are fully engaged in envisioning the future and planning for it.

Permanent parklets aren’t the only changes coming to downtown Wilmington’s landscape. Three new parks projects are in the works. The largest, North Riverfront Park – near Sawmill Point, Pier 33 and City Block – is on track for a late June completion, according to Wilmington city spokesman Dylan Lee. The city has approved about $605,000 to renovate Bijou Park, a pocket park on Front Street. Also greenlighted, according to Arts Council Executive Director Rhonda Bellamy: the Wilmington Rail Trail, converting a former railroad bed into a multimodal corridor between Third and McRae streets.

Add to that the recent renewal of public talks on New Hanover County’s Project Grace, which will reimagine and reconfigure the downtown public library and other county buildings in the same block. The result will be a facility housing both the library and Cape Fear Museum, bringing that much-visited site into the central business district. WDI is working with the county on that project, according to Childs, who says Project Grace is key to downtown.

Traditionally defined as “bridge to bridge, river to Fifth [Avenue],” Wilmington’s central business district – and downtown in general – is “about to get a lot bigger in the coming year as we continue to see investments in the Brooklyn Arts District, Castle Street, Northside, South Front and the Soda Pop District,” Childs said. “Those adjacent neighborhoods are going to be included in what we call downtown in coming years.”