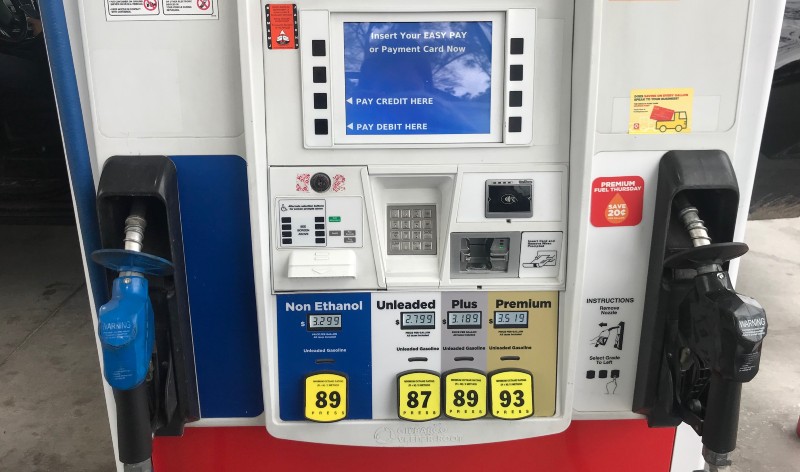 Gas prices, which are typically higher in Wilmington than in some other cities in North Carolina, are approaching $3 a gallon in the state. (Photo by Cece Nunn)

Roadways adorned with dogwood and redbud blooms aren't the only changes Wilmington drivers are seeing lately.

On the eve of spring, streets are increasingly packed with cars and gas-station signs are sprouting higher prices -- approaching $3 a gallon. That’s a far cry from last spring, when the early days of the COVID-19 lockdown left roads eerily empty and gas prices near $2.

Fast forward to 2021 and several factors are converging to drive the average price of a gallon of regular in North Carolina as of March 19 to $2.70 -- the most expensive daily average price since April 2019, according to AAA North Carolina’s gas-price tracker. A year ago Tar Heels were paying an average of $2.01 a gallon and $2.46 just a month ago. (Prices include both federal and state taxes).

Tiffany Wright, spokeswoman with AAA in North Carolina, said the state's average price for regular dipped below $2 multiple times last year, bottoming out at $1.94 on Nov. 24.

“Motorists are paying a lot more to fill up compared to February [2021],” Wright said.

A figurative “perfect storm” of events is responsible for the increase, along with a literal storm.

With the pandemic easing, people simply are driving more. And compared with the major lockdown periods early in the outbreak (when streets in Wilmington were reminiscent of the day after a hurricane) spring-break travelers are hitting the highways.

At the heart of the increase is old-fashioned supply and demand. The U.S. Energy Information Administration (EIA) reports that while demand increased significantly in recent weeks, supply has dropped. And AAA noted that refineries are making their annual switch from “winter-blend” fuels to the more-expensive “summer-blend.” (Fuel evaporates quicker in hot weather, so the formula is changed to curb pollution and prevent dissipation before it reaches the engine, according to the magazine Car and Driver.)

Then there was the literal “storm” -- the deep freeze along the Gulf Coast that shut down refineries, a disruption more often caused by hurricanes. Last month’s polar vortex shut down 18 of the 30 fuel refineries in Texas, but Bloomberg reported recently that nearly all were back online.

It’s not just ordinary drivers who are paying more. Diesel -- which fuels the trucking industry and much of the nation’s supply chain -- was averaging $2.93 a gallon Friday in North Carolina, up from $2.72 a month ago. That cost can quickly spill down to consumers.

A restaurant owner in Greenville, South Carolina, told WFFY-TV that recent price increases for some of his ingredients were based specifically on a jump in shipping costs. And with e-commerce at an all-time high, delivery and other ground-freight companies have been facing a shortage of drivers and are being further squeezed by rising fuel costs.

For Tar Heels living near South Carolina, a trip across the state line for a fill-up won’t save much. For example, Friday’s average price for a gallon of regular in Brunswick County was $2.72, compared with $2.65 in Horry County/Myrtle Beach.

With pandemic-fueled economic uncertainty ebbing, crude-oil production already has begun to increase, with more barrels headed to refineries. Although costs due to seasonal demand and the change in blends won’t go away, industry analysts say the increased production will help ease the pain at the pump somewhat.

And although prices aren’t expected to return to 2020 prices anytime soon, analysts also don’t expect the $3.50-plus prices of the early 2010s.

“While Americans are nearly guaranteed to see higher gas prices in 2021, it’s not all bad news,” according to Patrick De Haan, chief petroleum analyst at GasBuddy.com. “I’m very optimistic that we’ll see ... gas prices stay far under their previous records.”

The increase also has a silver lining, Scott Baier, chairman of the Department of Economics at Clemson University, told WFFY-TV.

“[As] people go out and drive around more, you’re going to see prices go up,” Baier said. “We don’t like it when gas prices go up, but I think that’ll be a sign that the economy is on its way to recovery.”

(Average price for gallon of regular gasoline as of March 19, 2021. Prices rounded to nearest cent and include taxes.)