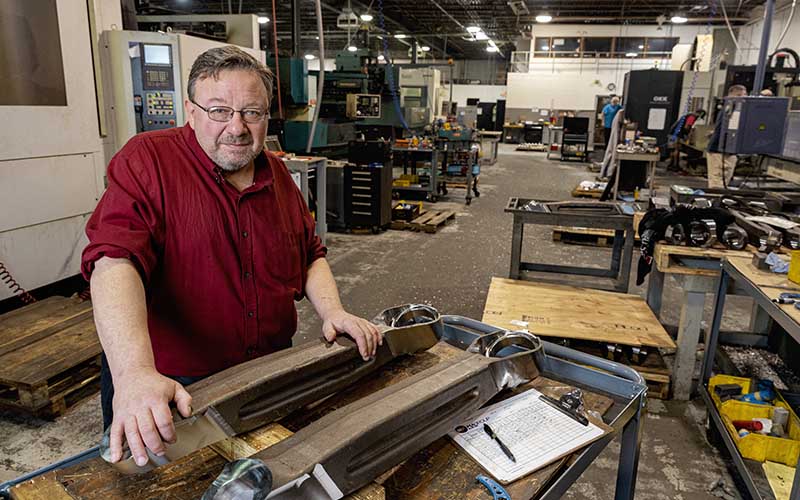 James Flock, general manager and director of operations at HSM Machine Works, stands inside the Leland shop where the firm makes landing gear parts for the aviation industry. (File photo)
The recent acquisition of New Jersey-based Air Marine and Airlift Hydraulics by MA Group will grow a Brunswick County manufacturer of landing gear components for the aviation and aerospace industry.

HSM Machine Works, a division of the Italy-based Magnaghi Aeronautica Group (MA Group), anticipates it will add about 10 people over the next few years and expand its portfolio following MA Group's purchase of Air Marine and Airlift Hydraulics earlier this spring, said James Flock, general manager of the local operation.

The financial details of the acquisition were not disclosed, he said.

The recently acquired company "will be absorbed into the New York facility first and then gradually transfer some work down here [in Brunswick County]," Flock said Monday.

"We will be expanding our capabilities," he said. "We will be adding some things that we don't currently do over here now, items such as assembly and testing."

HSM Machine Works was established in the early 1970s and has been in the Cape Fear area since 1991, Flock said. HSM and Blair Industries merged in the late '90s. Blair-HSM was acquired by Italy-based MA Group in 2018, according to the company's website.

In a statement made on MA Group's LinkedIn page, company officials said that the acquisition would "strengthen and enhance services to all of its customers with an international presence, customers and partners can also count on seven industrial sites in Italy, Brazil and the USA, with about 800 global employees."

Air Marine and Airlift Hydraulics is a supplier of landing gear maintenance, repair, overhaul services for aircraft primes and integrators.

“This acquisition marks a step forward in the expansion of our capabilities in the USA and increasing the offer of products, solutions and services for all of our customers' activities," said Paolo Graziano, CEO of the MA Group, in a company statement.

The recently acquired company will also provide plating services and surface treatments for customers and the extended supply chain of the aerospace industry, the statement reads.

There's no timing yet on when some of the new capabilities or jobs will translate to the Brunswick County site, Flock said.

"I think it's a great addition to the company," he said. "It increases our portfolio. It opens new marketplaces to us, and I think it's really going to help the company overall."