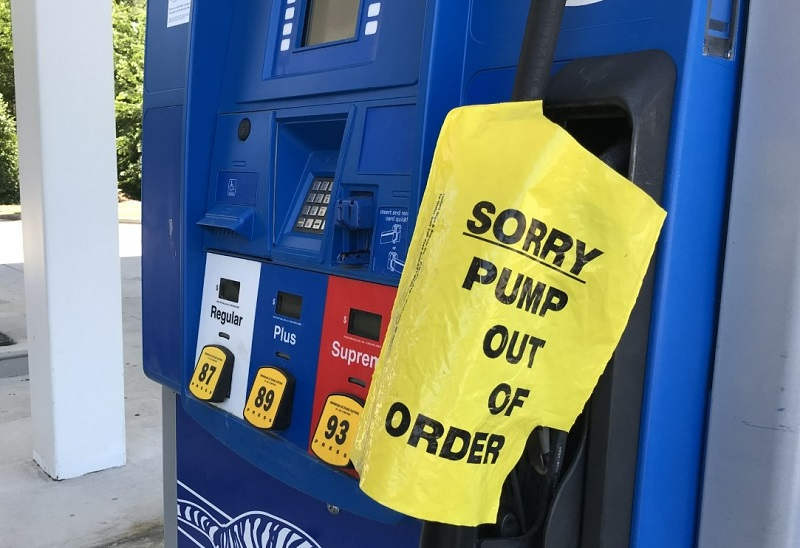 Fuel at the pumps around Wilmington is still lacking at some gas stations. (Photo by Cece Nunn)
The gas shortage situation is expected to remain a problem this weekend before getting better, according to AAA.

“The Carolinas will continue to see limited fuel supply for the next few days,” said Tiffany Wright, spokeswoman for AAA Carolinas, in an email Friday.

More gas is on the way in the next 24 to 48 hours, she said, though some areas will still be without fuel.

Colonial Pipeline has restarted its entire system and product delivery to all its markets has restarted, the company announced in a news release Thursday afternoon.

"Following this restart, it will take several days for the product delivery supply chain to return to normal. Some markets served by Colonial Pipeline may experience, or continue to experience, intermittent service interruptions during this start-up period. Colonial will move as much gasoline, diesel, and jet fuel as is safely possible and will continue to do so until markets return to normal," stated the release.

Business at the Wilmington terminal of Apex Oil Co. Inc., the terminal operator which has fuel among its shipments, has picked up since the Colonial Pipeline shutdown, said a spokesman with St. Louis, Missouri-based Petroleum Fuel & Terminal Co. on Friday.

Petroleum Fuel & Terminal owns Apex Oil's Wilmington terminal, located at 3314 River Road just south of the Port of Wilmington, according to the website.

“Over the last week, we have probably been a little busier than normal because, as you know, there are various terminals throughout the state of North Carolina, like in Greensboro and up in Raleigh, and they had some outages because of the pipeline shutdown," the spokesperson said. "So … truckers may have come down here to load out because of shortages on the pipeline."

​Apex Oil Co. provides wholesale distribution, storage and transportation of petroleum products including asphalt, kerosene, fuel oil, diesel fuel, heavy oil, gasoline and marine bunkers, according to the company's website. Apex has locations along the East Coast, the Gulf of Mexico and the Midwest.

Fuel products are received by boat, placed in tanks for storage and then distributed by various trucking companies set up at the terminal to be loaded out and delivered to gas stations, he said.

Typically, the fuel doesn’t go far from the distribution point, generally within a 100-mile radius, he said.

"It’s pretty localized on how far your distribution will be because the farther a transport truck … goes the more cost it adds to it,” the spokesperson said.

Fuel comes in from various sources, such as Europe, the Gulf Coast or Philadelphia, where there’s a refinery.

The Port of Wilmington itself does not receive any petroleum products, said Amy Passaretti, spokeswoman for N.C. Ports, in an email.

The business at the port also remains steady. "As of now, we have not experienced any trucking or supply issues," Passaretti said.

Gas prices are still expected to continue to rise into the Memorial Day weekend, as demand increases, Wright said.