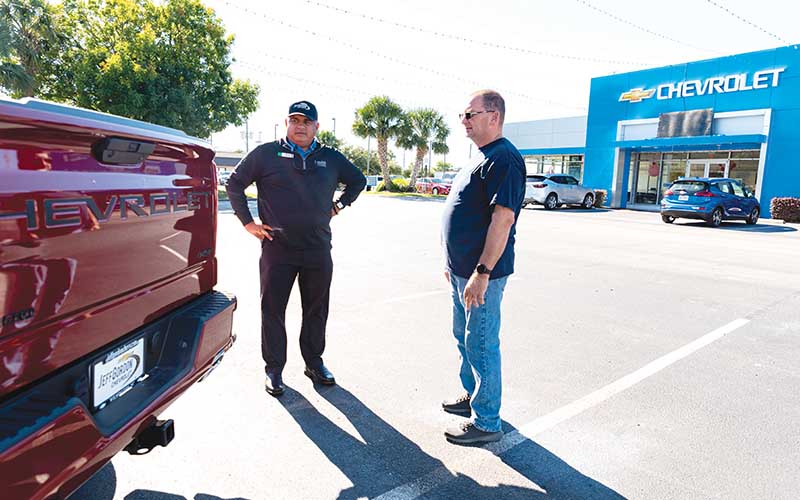 Raj Krishna (left), a salesperson at Jeff Gordon Chevrolet in Wilmington, helps customer Greg Benton recently at the dealership. (Photo by Michael Cline Spencer)
Faced with too few wheels on their lots and consumers looking for just the right vehicle, area auto dealerships have spent much of this year trying to satisfy the wishes of prospective buyers in a marketplace of narrowed options.

More than 20 months into a pandemic that at first kept the buying public at home but later ignited strong sales due to pent-up demand, dealerships are now having to work with their customers even more collaboratively because of a global shortage of semiconductor chips.

The chip shortage, which affects everything from a vehicle’s navigation system to automatic windows, has prompted auto manufacturers to delete certain features or suspend certain models while focusing on their most popular ones.

The gap between supply and demand has also increased sticker prices and has challenged the patience of buyers who in many cases must now wait months for the delivery of a new vehicle. Frustrated, some buyers have opted to go shopping in the used-vehicle market, thus driving up pricing in that market as well.

CarMax, the nation’s largest retailer of used cars with a dealership on Market Street in Wilmington, reported record sales in its past two quarters “driven by higher average selling prices and volume gains,” a statement provided to the Business Journal said.

At the end of August, the average price of a new car nationally stood at more than $43,000, according to Kelley Blue Book, the industry bible on vehicle values, up nearly 10% from a year earlier. The average list price for a used car stood at about $26,000.

While sales across the country are up year-to-date, inventory is expected to remain tight through the fourth quarter, and Cox Automotive, the parent firm of Kelley Blue Book, pointed to signs of a possible slowdown in new-vehicle sales in the months ahead.

In a survey released in August by Kelley Blue Book, 48% of shoppers said they were likely to postpone the purchase of their next vehicle by three to 12 months.

In the face of a persistent gap between supply and demand, unavailable models and rising prices, local dealers are trying to put their best foot forward.

Last year, when the pandemic hit and sales plunged, some automakers reduced orders for chips, only to find that when the market rebounded the available chips were going to other customers. That, in turn, led some auto manufacturers to suspend certain features or some production, according to Consumer Reports.

But Mark Santilli, marketing manager in the Performance Division of Hendrick Automotive Group, which owns multiple dealerships in Wilmington, said General Motors developed a workaround that has put the worst of the chip crisis behind it.

“What they decided to do was keep the factories open and use this Build-Shy technology where they built all these vehicles to the point where there’s currently about 90,000 of them sitting in factories and fields, bumper to bumper, and they don’t have chips in them. So what they’re doing now is as the chips become available, they’re retrofitting the vehicles and sending them out to us,” Santilli said.

“So because of the methodology that General Motors used, we’re able to get one to two transport trucks in daily. We may get four, five, six, 10 to 15 vehicles and we’re selling them all.

“Right now, we are building 2022 model-year vehicles and they’re arriving … but most manufacturers, including GM, have trimmed what they’re selling,” he said.

“They may have their heart set on a black Silverado but I have a white one in stock and they’ll take it out for a ride. It’s got all the features that they want but they really want black. They’ll come back and there could be three other customers with salespeople standing there asking, ‘Are you going to buy that?’ It’s almost like, ‘I really wanted black, but I’ll tell you what: Yes, I’m going to buy this one because there isn’t any.’”

At Ford Motor Co., management has started embracing a build-toorder process. This past summer, the company introduced Ford Express Buy, an online-only platform that currently takes orders for the Mustang Mach-E. But Ford intends to expand the choice of vehicles available under the program.

There is no requirement that local Ford dealerships offer the new option. Capital Ford of Wilmington did not respond to inquiries about the program’s local status.

While some new vehicles remain scarce, CarMax appears bullish. The used-car giant bought 59% more cars from consumers in this year’s second quarter than it did last year.

With the automotive market in a state of flux, industry analysts recommend that consumers review their options carefully. That includes looking at models not previously considered, holding off on buying to see whether desired models become available and taking good care of an existing vehicle until it’s time to shop it around.