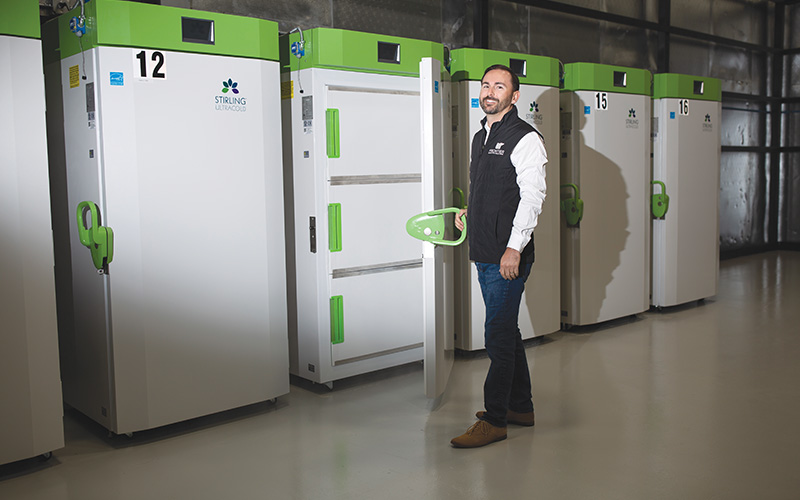 In the coming weeks, Frontier Scientific Solutions will welcome its first pharmaceutical shipment into a warehouse off 23rd Street, the soon-to-be former home of Adams Beverages’ local headquarters.

With a portion of the building recently upfitted to store pharmaceuticals instead of beer, Frontier’s venture represents the area’s first cold storage facility dedicated to the life sciences industry.


Frontier Scientific Solutions will take over as operator at the remainder of the nearly 70,000-square-foot warehouse sometime next year, following Adams’ move to its new facility in Leland and a renovation period to ensure the rest of the space is up to regulatory snuff.

Meanwhile, the novel firm is also gearing up to operate a second location at a more ambitious scale: Braddock said Frontier anticipates hiring over 100 employees to run a new 500,000-square-foot facility being constructed at the Wilmington International Airport’s business park. The airport facility is slated to open in late 2023, according to Braddock.

“Their plans will be transformational for the region,” said Randall Johnson, executive director of the N.C. Biotechnology Center Southeastern Office (NCBiotech).

Extensive regulatory hurdles mean cold storage facilities that house pharmaceutical ingredients and products must be tailor-made, according to Braddock. Along with his business partners, Braddock said the team observed a growth pattern in North Carolina pharmaceutical manufacturers and saw an opportunity – pre-pandemic – to capture a transportation logistics stream that primarily heads out of the Triangle and into the Northeast. Pandemic-induced supply chain bottlenecks further solidified the team’s already bubbling plans.

Locally, investments in cold storage infrastructure at the Port of Wilmington and opportunities at the airport open the area to a currently untapped field, Braddock said. About 1% of the port’s annual refrigerated container volume currently comes from life sciences products, according to a ports authority spokesperson.

“The current supply chain, the way that it exists, is quite inefficient and quite long,” Braddock said. “It was a great business opportunity. But we also saw an opportunity as well to keep the jobs, the revenue, the product, the supply chain – all of it in North Carolina.”

Both facilities – the renovated warehouse off 23rd Street and the airport complex – are owned by Indiana-based real estate development firm CIL Capital. Frontier has agreements with CIL to operate and provide logistics solutions out of the facilities, with exclusivity for current good manufacturing practices (CGMP) warehousing and distribution at the airport.

Former airport authority chair and current CIL Capital chief strategy officer Donna Girardot previously told the Greater Wilmington Business Journal that the airport development marks a new era. “This is just opening a whole new opportunity for this region to put us on the map,” she said.

The $100 million complex with runway access will help quickly transport vaccines or drugs internationally, according to Girardot.

Roughly half of the products at the facility will be transported through the port and half by air, according to Braddock.

With the Research Triangle Park (RTP) as a nearby powerhouse, Girardot said, “It just makes sense with Wilmington only two hours away that we should not only capture that business to Wilmington, but we should keep the business within North Carolina.”


Though the bulk of the state’s pharmaceutical manufacturing is stationed in the RTP, a homegrown Wilmington company is executing a significant expansion and launch.

Quality Chemical Laboratories, which provides pharmaceutical testing services to a range of clients including the largest firms in the world, is preparing to unveil its sister company, Pyramid Pharmaceuticals. Once it receives federal clearance, Pyramid will produce drugs being developed by QCL that are currently on the Food and Drug Administration’s shortage list, according to QCL founder Yousry Sayed.

“Our new facility will house the latest state-of-the-art sterile technology that will be an important addition to the pharma industry,” Sayed said.

Amid a $110 million expansion – of which half the investment is wrapped in equipment costs – a 110,000-square-foot facility adjacent to QCL on Corporate Drive off Interstate 40 is anticipated to receive a certificate of occupancy early next year. Equipment deliveries and installations are expected throughout 2023.

Alcami Corp., one of the area’s few drug manufacturing firms (that also engages in contract development), announced last year a $2 million equipment investment in its Wilmington facility to increase its capabilities. An Alcami spokesperson confirmed the investment has been made, and the local firm of 350 is looking to add more than 15 to its team in Wilmington.

With QCL’s new facility, Sayed said he is looking to add 180 more. Today, QCL could hire 60 members to its 250-person team to meet current industry demand. Workforce is the firm’s No. 1 challenge, according to Sayed.

Though there are of course opportunities for those with advanced degrees, many of the roles QCL is hiring for don’t require them.

Johnson, with NCBiotech, said his group’s focus is making sure companies like QCL can access the workforce necessary to succeed, “especially when they’re expanding.”

A renewed focus of the organization is attempting to access and connect with a more diverse pool of potential employees throughout the region and state, Johnson said. “Life sciences jobs are not only for Ph.D.s in lab coats,” he said. “There’s a full range of jobs across the educational spectrum. … That’s key.”

Ken Halanych, executive director of the UNCW Center for Marine Science, said it can be a challenge to find a balance between prepared students and available positions. “It’s sort of a chicken and an egg problem,” he said.

The region is strong in chemistry and natural products chemistry and could prosper from opportunities in genetics and genomics work, he said.

“To me, if you look at biotech, where a lot of the major new innovations are, it’s dealing with DNA and RNA and pushing those angles, and I think we just haven’t quite captured that here yet,” Halanych said.

Two new UNCW doctorate programs – pharmaceutical chemistry, which starts next fall, and applied coastal and ocean sciences, which began this year – should tie into this sector’s growth, he said.

“We have an opportunity to generate more intellectual capital to bring more companies in,” Halanych said.

NCBiotech is doing more than it’s ever done to try and reach people who may otherwise not consider careers in life sciences, Johnson said.

“It’s not good enough just to let people know that these opportunities are there,” he said. “We need to do even more to connect with people to pull them into the workforce.”

One effort underway is a reimagined Southeastern Biopharmaceutical Manufacturing Workforce Training and Innovation Hub. NCBiotech pitched building the proposed 16,000-square-foot campus at the University of North Carolina Wilmington, a project for which QCL would have pledged $2.5 million, according to the grant application. But the project didn’t garner a recent Build Back Better grant, though NCBiotech did net $25 million for other initiatives statewide.

“That’s a project that has to be done,” Johnson said of the envisioned hub. “And we’ll figure out a way to make it happen.”


Wilmington’s life sciences reputation has long been anchored by PPD, which Thermo Fisher Scientific Inc. acquired last year. Thermo has recently announced a planned manufacturing facility in Mebane, North Carolina, and a bioanalytical lab in Richmond, Virginia. So far, the company hasn’t made any major changes or announcements to shake up its local workforce of roughly 1,800.

The landmark downtown building is slated to be sold, with marketing documents describing the property as a “unique mixed-use redevelopment opportunity.”

For Network for Entrepreneurs in Wilmington (NEW) founder Jim Roberts, this possibility is a letdown. “I don’t want the PPD building to be converted to residential,” he said. “There are so many labs in that building that our life sciences sector needs so badly.”

Though UNCW’s MARBIONC facility provides much-needed space and equipment for early-stage life sciences entrepreneurs, Roberts said there’s no next-stage space for the companies to grow into.

“We are talking to companies that have an interest in having a presence in Wilmington. But right now, there’s nowhere for those companies to go,” Roberts said. “How can we build a life sciences sector when there’s not a place for them to call home?”

Life sciences startups face steep and expensive obstacles, Roberts said. Because most life sciences companies have a growth span of at least a decade, they struggle to attract funding, when investors seek earlier exit opportunities, he explained. Also, the human capital and equipment required to get started can cost millions.

These challenges are why Roberts has organized an event with three panel discussions surrounding the future of the sector in the area, planned for Nov. 10, hoping to attract investment funding for fledgling ventures.

“Every city in America,” he said, “is trying to recruit these jobs.”