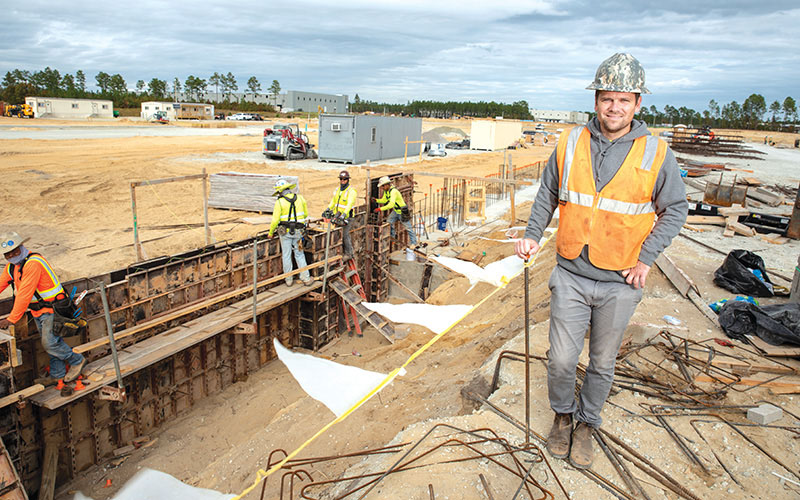 “We wanted to be the best,” DiMaio said. “We drove ourselves to accomplish that goal every day.”

For DiMaio, owning his own concrete company is the realization of a long-held vision. His interest in concrete was sparked in his teens as he tiled bathrooms and kitchens with his grandfather. DiMaio went on to study concrete and masonry at Williamson College of the Trades and worked at a couple of local concrete companies after moving to Wilmington in 2016.

Within a couple of years, DiMaio decided it was time, and Wilmington was the place, for his own company. DiMaio’s lifelong friend, McMullin, who has an extensive background in risk management, joined him, and they opened for business in 2018.

“I felt like there was a need and desire for a commercial outfit in Wilmington,” DiMaio said. “Everyone was in one specific niche. No one was into the world of structural concrete and was able to service a multitude of customers.”

Currently, DiMaio Concrete & Construction does structural concrete, flatwork and paving, and decorative concrete. However, initially, the company did only residential work, such as ripping out and replacing driveways and patios. In that first year, DiMaio says he thinks his company did more driveways than anyone else in the area. For DiMaio and McMullin, however, quality was just as important as quantity.

“Our goal was to do whatever we did with excellence,” DiMaio said. “The way to impress our customers was with a good quality product, to make the best driveways in town.”

While residential work gave the entrepreneurs entry into the concrete industry, it also paved the way for bigger projects. Not only did DiMaio and McMullin meet contractors personally during this time, but they also built a positive reputation online. Their residential customers consistently wrote positive reviews about the company, detailing their experience and how they were treated.

“Out-of-town contractors saw that,” DiMaio said. “We tried to take that experience and transfer it to local and out-of-town relationships with contractors doing commercial construction.”

The strategy paid off. By the end of 2019, DiMaio Concrete & Construction was poised to pursue commercial projects. Then COVID hit.

“We had worked our tails off for the past two years,” DiMaio said. “We were at the place where we were doing commercial work, and the world stopped.”

DiMaio and McMullin did the only thing they knew to do. They kept plugging away, and they landed larger projects. In 2021, DiMaio Concrete & Construction was hired for major jobs such as a municipal building in Samson County, an elementary school in Columbus County and the second half of the 130,000-square-foot expansion of Quality Chemical Laboratories in Wilmington. Their crew grew from 15 to 40 guys.

It was hard-going. Due to supply chain issues, work was stop-and-go. Often DiMaio and McMullin couldn’t get the materials they needed, or they had their materials but other contractors couldn’t get their supplies.

Working under such conditions was so difficult that DiMaio and McMullin came up with a mantra: If you can do construction in 2021, you can do anything.

They have kept that mantra, and it has become DiMaio’s and McMullin’s impetus to push for larger and more complex projects.

“Anything that has to do with pouring concrete, we try to get a phone call about it,” DiMaio said.

Of course, it takes more than an affirmation to win contracts and satisfy contractors and developers. That’s where DiMaio and McMullin’s aforementioned commitment to excellence comes in. They get involved in a project long before it officially starts, working closely with contractors, developers, suppliers and architects to draw up a budget. They also take responsibility for the variable costs associated with the concrete and provide a fixed price rather than labor-only pricing.

Then DiMaio and McMullin oversee each step of a project and ensure jobs are completed on time and on budget by mobilizing their crews. If needed, they deploy two or three guys at a project’s end to complete a punch list.

DiMaio and McMullin also invested in sophisticated software to enhance their services. For example, their robotic survey equipment ensures that buildings are in the right location, and their laser screed enables them to pour large volumes of concrete and ensures floors are flat. Also, all their foremen and assistant foremen are equipped with iPads and smartphones, so they get updates and the latest drawings while working in the field.

Another component of DiMaio’s and McMullin’s success is their highly-qualified crewmen.
“You are nothing in this industry unless you have the manpower and staff you can trust,” McMullin said.

To ensure they have top-notch crews, DiMaio and McMullin invest in them. They try to be on the front end of the industry salary-wise, and they provide a career path for their employees.

“We love seeing someone start as a finisher and become an assistant foreman or foreman,” McMullin said. “If they have the right attitude, we provide an opportunity to learn and grow and have a career.”

Today DiMaio and McMullin work primarily on commercial projects. The company has five crews, 45 employees and 10 trucks. Their company has laid the concrete for the new Harris Teeter on Carolina Beach Road; The Cottages at Riverlights; a new Habitat for Humanity facility in Wilmington; and the largest coal storage facility in North Carolina, which is located in Pender County. They have worked on commercial projects throughout Pender, New Hanover and Brunswick counties as well as Jacksonville, Fayetteville and Myrtle Beach.

There’s nothing easy about concrete and construction. DiMaio’s and McMullin’s workdays often start at 3 or 4 o’clock in the morning, and their phones ring 24/7. But they said the hardships are worth it, and they have no plans to slow down. Their goal is to lead the industry throughout the region and the state, McMullin said.

“We are proud of what we’ve built and been able to accomplish,” DiMaio added. “We’re really just getting started. We’re excited to see how we build out the business in the next five years.”