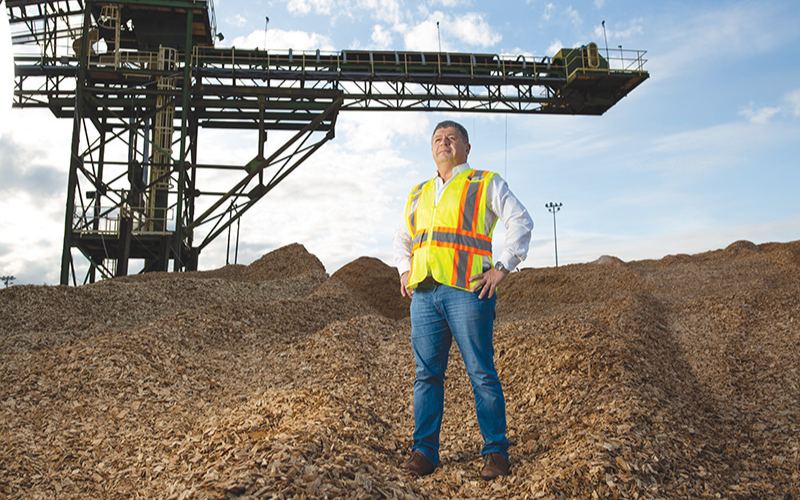 The first time was in 2011 when he restarted operations at the facility “from scratch” while working for a Turkish-based company, Yildiz Entegre. “It was abandoned,” he said. “I basically built it for them.”

After hurricane damage in recent years, the operation once again fell dormant. So last spring, Basaga spent $2.5 million renovating the facilities to bring his old bailiwick back to life – but this time, as his own boss.

“This time I was a little bit more experienced,” he said. “I invested my own money in the Wilmington property. When you work for somebody else you have to go through 100 steps to be able to get it approved – if you can. No guarantee if you can.”

Work began to revamp the facility at 2128 Burnett Blvd. in early 2022. Basaga invested in a conveyer system, loader and a new electric room. By late July, the operation sent out its first international shipment.

With more than 15 years of experience in the wood chip industry, Basaga has maintained key relationships with loggers in the region. “In this business, connection and repetition is the key,” he said.

He estimates the Wilmington business, with 10 full-time employees, supports about 65 jobs indirectly. Providing wood to operations like Basaga’s can help supplement a logger’s business, he said. Because the product is chipped, loggers and sawmills can also utilize scrap material for secondary use.

Truckers deliver soft yellow pine logs harvested in the region to the operation. Large machinery then chips the logs into large stockpiles that are eventually loaded onto deep-water vessels. During the business’s first year in operation, Basaga International shipped roughly 112,000 metric tons of wood chips on three voyages to buyers in Turkey.

“I wasn’t expecting this much,” Basaga said of his inaugural year’s volume. “It’s a little bit more than I anticipated.”

Depending on the client, the chips are desired for a variety of uses – to make medium-density fiberboard (MDF), which is used to make furniture and cabinetry; as biomass for energy production; or in paper products, like producing cardboard for delivery boxes.

“Look at Amazon, look at Pizza Hut, how much cardboard they use – it’s all wood chips,” Basaga said.

The burgeoning industry has seen plenty of growth in recent years, Basaga said, and he anticipates global demand will only continue to rise.

“It’s definitely going to increase. There’s no way around [it],” he said. “We only have one world, and the population is increasing and demand will be higher and higher every day.”

Energy demand is driving growth in the wood chip industry, according to a report released last year by Kenneth Research, which projected the sector overall would grow by 5% annually in the U.S. through 2028.

So far, Basaga’s Turkish buyers are using the chips for MDF. He spent the past year courting clients in Asia, which predominantly use the chips for cardboard, and across Europe, where he anticipates a greater need for biomass products amid an energy crisis.

Though some governmental issues have held up progress on some new contracts, Basaga said he expects to make headway on landing new buyers in 2023.

“We don’t have a preferred customer,” he said.

This fall, Basaga attended wood chip conferences in Singapore and Portugal to make buyers aware of his new venture. As an international businessman, Basaga said it’s important to respect other people’s religion, culture and language when making connections. “I think I do have a real good relationship [with clients] no matter where I go,” he said.

At full capacity, the facility could potentially ship up to six times as much as it did last year. “Hopefully we’ll make some deals,” he said. “We are very close.”

Basaga said he chose Wilmington as the base for his operation because of his familiarity with the facility, the port’s deep-water access and the region’s flourishing logging industry. A couple of months after opening the Wilmington operation, Basaga opened a second facility in Alabama. The wood basket there is stronger, he said and gets delivered so far to clients in Mexico.

This year, Basaga said he aims to continue improving the facility’s loading system and expects to cut loading time in half. He also hopes to utilize larger ships on a more frequent basis as activity picks up.

“It’s a lot of action every day. Every day something [is] different. It’s definitely not boring,” he said. “I love the wood business.”

Number of employees: 10
Year Founded: 2022
Top local official: Taner Basaga, CEO and owner
Company description: Wood chip manufacturing and exporting operation located at the Port of Wilmington
Products made locally: Southern yellow pine wood chips
Product distribution: Turkey, with plans to expand to markets in Europe and Asia in 2023
What made the company decide to make its goods locally? With the area’s existing wood basket (the availability of timber in a given geographic location), Basaga said, “It makes sense.” Also, the Port of Wilmington’s deep-water access and ability to accommodate large vessels makes the operation tenable. “You need to have the wood basket, and you need to be in the right place geographically,” he said.
What’s your target market?
Basaga: “The whole world. We started in Turkey, but we are in the process of signing agreements to export to China as well as Mexico and Europe.”
What’s planned next? Basaga said he hopes that clients in new markets are on the horizon for the new business. “Hopefully we’ll make those deals with those customers and just be able to expand,” he said. “When I say expand, I mean sourcing wood from a wider geographic area, so a 100-mile radius instead of a 70-mile radius.”