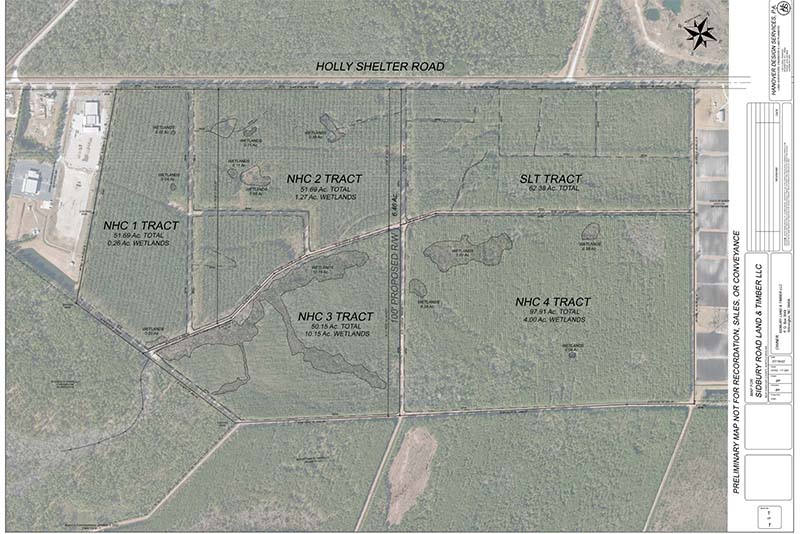 Commissioners will consider an agreement at their Monday board meeting that entails the creation of a new business park on Holly Shelter Road, roughly 4.5-miles from another county business park under development on Blue Clay Road. Water and sewer infrastructure should be installed in the Blue Clay Business Park by early 2023, a county spokesperson said earlier this month.

The new Holly Shelter Business Park could get kickstarted by a 50-acre land donation from Sidbury Land & Timber LLC, an entity overseen by Cameron Management.

Monday, commissioners will consider granting Wilmington Business Development (WBD) $145,000 to fund and manage a master study plan for the proposed Holly Shelter Business Park. WBD declined to comment on the proposal until after the Monday vote.

Earlier this month, commissioners approved an agreement with Cape Fear Public Utility Authority (CFPUA) regarding the installation of water and sewer infrastructure in various areas of northern New Hanover County. The vicinity of the proposed business park on Holly Shelter Road was included in that interlocal agreement, whereby the county committed to spend the estimated $23.5 million it could cost to install infrastructure in the five areas identified.

“Thanks to our active partnerships with entities like Wilmington Business Development, along with the Commissioners’ continued focus on elevating and enhancing economic development in our county, we are fortunate to be able to bring these types of projects up for consideration,” assistant county manager Lisa Wurtzbacher said in a statement Thursday. “As a staff, our goal remains to create conditions that foster economic growth in New Hanover County and we’re excited to see what opportunities this business park could provide for our community.”

In the proposed agreement with Sidbury Land & Timber, the county will pay $8.4 million to construct and install water and sewer mains and fire hydrants along Holly Shelter Road. This amount has already been approved by commissioners via the $23.5-million deal with CFPUA, according to a county spokesperson.

If the county and CFPUA fail to install the infrastructure on-site by June 2026, Sidbury Land & Timber may terminate the agreement. The county may not record the deed and associated filings until the utilities are operational, the draft agreement states. Binding construction documents for the infrastructure installation must be in place by January 2025.

Design work on the previously agreed upon $23.5-million infrastructure project should be completed next year and infrastructure is expected to be operational by summer 2026, according to the interlocal agreement.

Though New Hanover County does not oversee or maintain roads, it will “use its best efforts,” per the draft agreement, to have the N.C. Department of Transportation install road improvements or traffic updates associated with the development of a business park within three years. Within three years of the park utilities being completed, the county must also install a paved public access street.

Asked for an estimated cost for the public access road, a county spokesperson said more information about the street would be gleaned from the WBD-coordinated master plan study.

The value of the 50 acres, located near a Duke Energy office on Holly Shelter Road, is $900,000, according to an estimate from the county tax office.

Sidbury Land & Timber owns more than 1,900 acres in this area, according to county tax records.

As part of the arrangement with Sidbury Land & Timber, the county will have the option to purchase 200 adjacent acres in at least 50-acre increments. The county may purchase the first 50 acres at 80% of a final appraised value. This option agreement will last 20 years.

Sidbury Land & Timber may construct an industrial building or warehouse on land included in the county’s 200-acre option area. A representative for Cameron Management could not be reached for comment.

Update: This article has been updated to include additional information provided by the county.