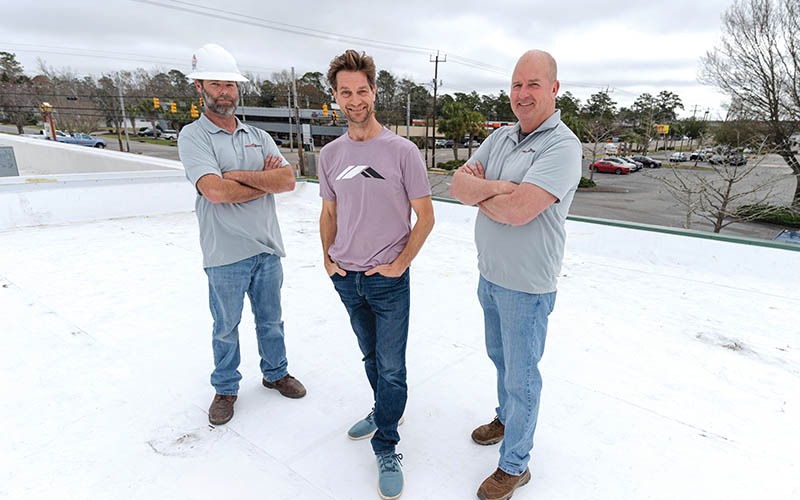 Highland Roofing Construction Manager Rickey Hill (from left), owner Iain Fergusson and Project Manager Bill Kohaut are shown on the roof the company completed at Oleander Shopping Center in Wilmington. (Photo by Michael Cline Spencer)
Iain Fergusson’s future wasn’t clear as the teenager stood atop his family’s rambling farmhouse, but he knew that he loved being up there.

“I grew up in the southwest corner of Scotland on the farm that had been in my family for generations. It was a big, falling down house that leaked every time it rained.”

He was 16 before the family could scrape together enough money to pay some locals to help repair the slate roof. “I went up there, and I loved it. It planted a seed.”

Thousands of miles and decades later, Fergusson’s Highland Roofing Co. is closing in on 16 years of business in Wilmington.

Fergusson left his village of about 150 people in his early 20s following an American student he later married. The couple traveled, living in several U.S. towns. Then they had twins, and Fergusson looked at his life differently.

“I needed to get serious about life. I always had roofing in the back of my mind,” he said.

Determined to give clients a quality job at a fair price, he took the experiences he had gained from working for other companies and started Highland Roofing in 2005. Although they’re no longer married, his former wife, Rebecca, remains his business partner.

The company started with an emphasis on residential metal roofing.

“Looking back, I started the company not knowing much about roofing,” Fergusson said. “I learned a lot while working. I just followed my heart. I had people asking me about different types of roofing, so I had to cautiously and carefully learn on the job.”

For five years, Highland did only residential roofing. After gaining experience in flat roofing materials, they moved into commercial, hiring an employee with specialized experience. In 2015, they acquired Hanover Iron Works, a local company with a century in business.

“I inherited some wonderful clients,” Fergusson said. “That made the decision to move away from residential.”

Among the projects Fergusson has thoroughly enjoyed is the green roof on the county’s Juvenile Justice Center. “It’s fun for something new to come up and learn something interesting,” he said.

Green roofs incorporate traditional roof membrane covered by a planting medium, such as soil, and live plants. One of the several benefits is that the plantings protect the roofing materials from ultraviolet light, so the roof lasts more years than the 20-year expectation of exposed membrane, and that helps to offset the upfront installation cost.

Fergusson said he also likes working with fluid applied roofing, which can be applied as a new roof or over an existing flat roof.

“The benefit is you’re using the existing roof, which becomes a substrate; it’s not something that can be done on every roof,” he said. “Sometimes the existing roof is not in good enough condition.”

There are circumstances when the old roof just needs a bit of prep work to get it into shape. “It’s a win-win for everybody. Fluid applied is much less expensive than tearing off the existing material. Also the exposure is much less,” Fergusson said. “No opening up the building to the elements.”

He described it as being monolithic with no seams, no laps, no edges or openings that can deteriorate. “In 20 years, it can be cleaned and recoated again,” he said.

Highlands repaired the 50,000- square-foot former StarNews building, on South 17th Street, after Hurricane Florence, which hit in 2018. To replace the existing roof would have been more than $1 million, Fergusson estimated.

Highland is a partner in Duke Energy’s commercial rebate program to improve the energy efficiency of structures, including installation of a more reflective cool roof system.

Fergusson noted that Hurricane Florence was the first real storm the company has endured.

“It was a good experience for the company because it tested us to our limits,” he said. “We learned about our team. It was bedlam for six to nine months.”

The huge workload allowed Fergusson to reorganize his workflow. “I’m so proud of how efficient a team we are,” he said. “Every person has a defined role, and everyone is really good at it; everybody works well together.”

Their growth has included a move into the Raleigh market, where they have estimators and project and construction managers. A trial run in the Myrtle Beach market resulted in procurement of clients, but they’re now serviced out of the Wilmington office.

“I’m most proud of all our people and how good they are individually and together. The people are what defines my success. I’m grateful to this community for the opportunities provided with referrals and repeat business,” Fergusson said.

He added, “I’ve always been quite good about being honest about what I don’t know. I always took care of people the way I’d want to be taken care of. I credit that and the people I’ve brought in for the success. It’s a good town. If you can get a good reputation, they’ll spread the word.”

Mainstay off the main drag

Anniversaries: Making of a milestone