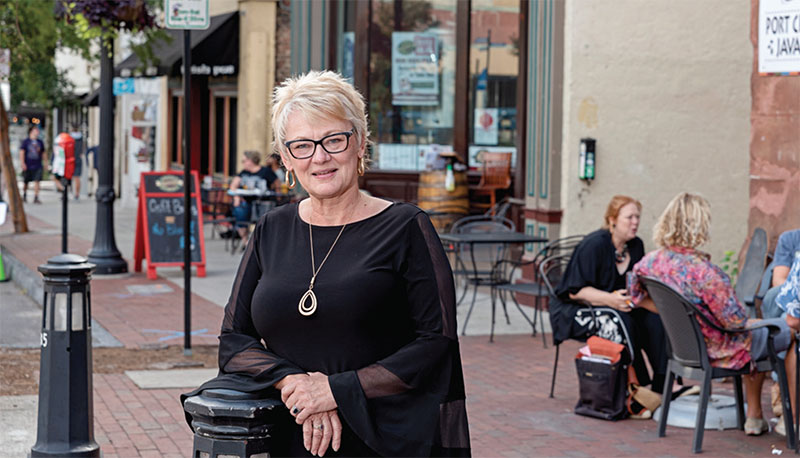 Terry Espy, shown on Front Street in Wilmington, is president of the Downtown Business Alliance, an organization that pushed for the outdoor dining expansion program Downtown Alive. (Photo by Michael Cline Spencer)
Downtown Business Alliance (DBA) is highly visible these days as a program it pushed for – Downtown Alive – earns high marks from business owners and customers alike.

Born of the frustration of down­town restaurateurs and retailers at COVID-19 restrictions, Downtown Alive expands those businesses’s access to outdoor space for dining or merchandising by closing off two blocks of Front Street and one block each of Princess and Dock streets during specified hours Thursday through Sunday.

More recently, the city extended the original timeframe for Down­town Alive and allowed other businesses in the Central Business District to create “parklets,” dining or retail space in front of their estab­lishments defined by barricades.

“There is a total of 32 businesses participating,” said DBA President Terry Espy. “The Cotton Exchange grabbed three barricades, and the vendors inside the building are taking turns setting up in that space. They have live music in the courtyard.

“The goal of Downtown Alive is to bring people downtown safely and to increase the possibility of them going into your shop and buying your merchandise,” Espy added. “One of the points we made to the city was this program enabled restau­rants to remain open and thrive.”

When one business segment, such as restaurants, is shut down, sur­rounding businesses die, Espy said, pointing to examples in the Triangle.

“In downtown Raleigh, the win­dows are still boarded up,” she said.

DBA advocated for the concerns of the businesses; the city responded by creating and staffing the Down­town Alive program.

Joan Loch, a former downtown business owner and longtime DBA board member, said the organization worked closely with 15 city staff members to get it in front of the Wilmington City Council for a vote and served as a bridge between the downtown business community and the city on the project, which is man­aged by Cool Wilmington.

Downtown Alive has been funded through Oct. 18 by the city, Wilm­ington Downtown Inc. (WDI) and DBA.

“We’ve gotten the city to agree that any extension proposal does not have to go before city council, but can go directly to [City Manager] Sterling Cheatham to decide,” Espy said.

The Downtown Alive collaborative, with DBA’s efforts led by Espy and Loch, is the most recent example of the organization’s advocacy since its founding in 1956. But the muscle DBA has been able to put behind this COVID initiative speaks to the organization’s growth in recent years.

“My first experience with DBA was 13 years ago, when I was asked to speak to a DBA meeting at Orton’s Pool Hall,” Espy recollected. “There were six people seated around a pool table. The organization was on life support.”

Six years ago, Espy agreed to join the board. Five years ago, she was in Taos, New Mexico, when she received a phone call from Loch.

She recalled promising the board to serve for a year and insisted that she wanted a board that was active, congenial and progressive. She also told the board it needed to include the North Fourth Street, Castle Street and South Front Street areas in its downtown purview.

“In October I will finish four years as president and have been told I need to do one more year,” she said, noting that Loch, her colleague at MoMentum Companies, continues to be a moving force within the organization as well.

“It’s like after Hurricane Florence; [COVID issues] have brought people together and given them opportunities for collaboration and getting acquainted,” Loch said. “We serve our members but we also help nonmembers. Every bit of money goes back into the association.”

Espy pointed to several of the organization’s accomplishments.

“We were the impetus behind the Downtown Trolley realignment,” Espy said. “And the designation of [downtown] districts – we took the lead on that. The Convention and Visitors Bureau had studied it and had identified the districts, but nobody was running with it.

“We hold seats on several city committees, and one of those is downtown parking,” she added. “Our group thinks beyond the minute to what we need to plan for.”

One upcoming issue is WAVE Transit’s move to do away with the downtown trolley, which DBA sees as an important business connector as well as a service that reduces the need for parking spaces downtown.

Currently, one trolley plies the route while the other is on standby. DBA recommends that both trolleys run on a regular schedule, which would decrease wait time from 40 minutes to 20 minutes and perhaps would attract greater ridership.

DBA also sponsors street events downtown such as Rims on the River and the American Craft Walk. To ensure that downtown businesses benefit from all special events downtown, the organization has crafted guidelines on booth spacing and placement that all festivals will need to abide by.

In its efforts to boost downtown, DBA works closely with WDI. Espy explained that the two organizations have complementary missions.

“WDI is the economic driver, looking at things from 10,000-foot view,” she said. “Once businesses are here, DBA holds their hands. It’s a good marriage.”