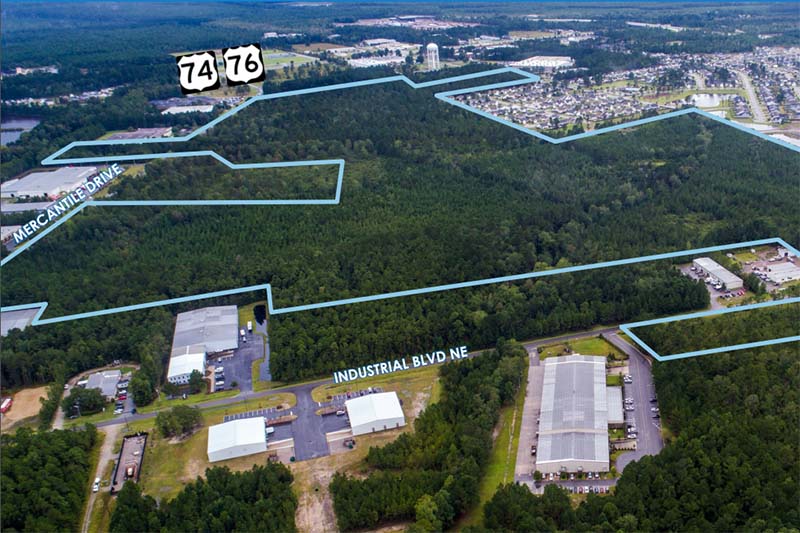 A local distribution facility is planning to relocate to an undeveloped 26-acre portion, part of a 200-acre listing by Cape Fear Commercial in the Leland Innovation Park. (Courtesy of the town of Leland)

An unnamed company is in talks to relocate its New Hanover County headquarters to build a distribution facility in the town of Leland.

The project is being planned on 26 acres, part of a larger collection of land annexed into the town of Leland in July 2020. If it comes to fruition, it would be the first new build on the town’s recently annexed and undeveloped land located in the Leland Innovation Park.

The sale of a 26-acre portion of 200 acres owned by WCM Enterprises, listed by Cape Fear Commercial broker and senior vice president Will Leonard, is pending. A couple of weeks out from its potential purchase, the property went under contract about 60 days ago, Leonard said.

The company is tentatively planning a 90,000-square-foot distribution facility with the potential to expand it up to 127,000 square feet in the coming years, according to Leonard.

A majority of new, large-scale industrial space available in New Hanover County is primarily just for lease, whereas the undisclosed company is seeking to own its own facilities. “That’s mainly the reason they went down there,” Leonard said, explaining the planned relocation to Brunswick County.

Besides the residential neighborhood Windsor Park, which borders the innovation park, the land was part of the town’s first large annexation in what was formerly known as the Leland Industrial Park. The move introduced swaths of industrial acreage the town had historically lacked under a new zoning designation, the “innovation district.”

Totaling 220 acres, the property is owned by WCM Enterprises LLC. Before scoring that land, the town had welcomed one smaller 3-acre parcel in the park into town limits in June 2018.

The cost of land in the park was attractive, Leonard said, as were its multiple access points, which includes access to I-140 via Mt. Misery Road.

Interest in the large industrial listing at the park is “definitely the highest it’s ever been,” he said. Leonard is anticipating an offer from an out-of-town developer to buy the remaining acreage with the possibility of constructing speculative buildings – prospective plans that have not yet been inked or cemented.

In May 2018, economic developer Gene Merritt – lauded for rejuvenating downtown Wilmington –launched the Leland Innovation Park, a nonprofit which arose out of the town’s economic development committee. The nonprofit’s original goal was to improve the park’s aesthetics and curb appeal by introducing community maintenance and signage.

End goals weren’t accomplished but the initial effort appears to have still made some headway. Gary Vidmar, Leland’s economic development director, said the nonprofit has been inactive for the past two years. Merritt said he hasn't been involed since setting the organization up and isn't sure why progress stalled.

Business development strategist Bruce Mancinelli participated in the origination of the effort, which sought to attract higher-paying and skilled jobs to the park, then out of the town’s corporate limits.

“That was the focus that motivated us to put our arms around this … orphaned industrial park that was not getting the attention that we felt it should,” Mancinelli said. “This was a way with which to ultimately promote the new class of potential employees … to start talking innovation”

The same month the nonprofit launched, Mancinelli partnered with Pete Peterson, founder of Manufacturing Methods, to bring The Leland Hub to a 3-acre parcel next to the company’s existing facility in the park. Planned to feature 12,000 square feet of coworking space to service startups and existing companies in the park, the hub never materialized. Interrupted by the pandemic, progress on the project is on pause, Mancinelli said.

Still, the vision of a more forward-thinking park progressed, Mancinelli said, as evidenced by enhanced coordination among park business owners and the large town annexation. Getting the undeveloped acreage into town limits, coordinated by Bill Schoettelkotte, WCM Enterprise’s registered agent, was a major accomplishment for Leland’s efforts, Mancinelli said.

Schoettelkotte, Cape Fear Commercial’s director of development services, did not immediately return a request to comment on the pending deal.

Mancinelli credits Vidmar with the park’s rebranding efforts. “He was the drum major that really led that parade,” he said.

In November, Vidmar told the economic development committee the company was seeking to relocate to Leland because there is relatively more growth occurring in Brunswick County, the open land available and the road networks.

He also told the committee a pharmaceutical distribution company had considered the Leland Innovation Park, but ultimately chose the ILM Business Park in New Hanover County. This was a likely reference to CIL Capital’s plans for a 500,000-square-foot storage and distribution facility for the life sciences industry at the airport-adjacent park, potentially a $100 million investment.

The pending offer of the portion of the large parcel fronting Mercantile Drive is noteworthy for progress at the park. “This is the first written purchase offer that has been received from anyone since the annexation took place,” Vidmar wrote in an email Monday.

Coalition comes out against large development across from downtown