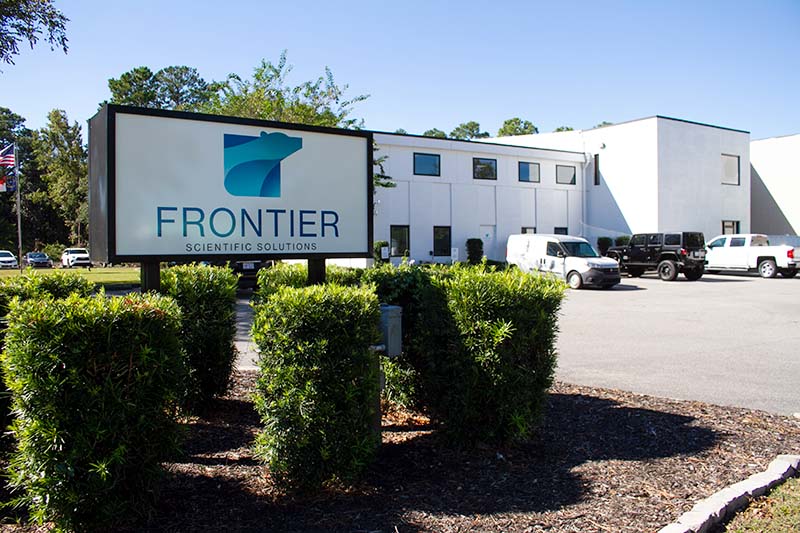 Frontier Scientific Solutions is now operating at 805 N. 23rd St. and will soon welcome its first shipment of life sciences products for temporary storage. (Photo by Johanna F. Still)
Set to soon take over what’s long been operated as a beer distribution warehouse, Frontier Scientific Solutions is introducing the region to a service that’s currently not locally available: temperature-controlled storage for the life sciences sector.

Within the coming weeks, the new firm expects to welcome its first pharmaceutical shipment at 805 N. 23rd St.

While Adams Beverages still operates out of about three-fourths of the facility, Frontier Scientific Solutions is set to take over the entire space sometime next year following the beverage distributor's move to its new local headquarters in Leland.

Getting the roughly 15,000-square-foot Frontier is currently stationed in required significant investment and effort, as pharmaceutical cold storage calls for adherence to a set of stringent protocols. Once Adams moves out, the entirety of the building is planned to be converted to accommodate the life sciences industry.

“We're responsible for that product that eventually ends up in a patient's arm or body,” said Frontier’s chief revenue officer, Michael Braddock II. “So it's highly compliance-related.”

CIL Wilmington purchased the property from Adams last June for $5.5 million, property records show. Braddock's wife, Lannin Braddock, who he co-founded real estate firm The Braddock Group with, represented CIL in the deal; Will Leonard with Cape Fear Commercial represented Adams. Adams bought the facility from R.A. Jeffreys for $5.8 million in 2019, which had owned it since 2008.

Frontier has exclusive operating agreements with CIL Capital, an Indiana-based real estate firm in the midst of constructing 500,000 square feet of new cold storage space at the Wilmington International Airport’s business park. The North 23rd Street operation already has, and the airport facility will have, the ability to store pharmaceutical products at controlled ambient, refrigerated and ultra-cold temperatures, according to Braddock.

Braddock said both facilities, representing phases one and two of Frontier’s growth, can help trim several hours off of the current in-state pharmaceutical manufacturing supply chain, which primarily runs by truck from the Triangle to the Northeast. The company aims to service North Carolina-based pharmaceutical manufacturers as its primary clientele, a majority of which are located in and around the Research Triangle Park.

“We're shaving off 70% of the drive time as it currently exists,” Braddock said. “What would normally be an eight-to-10-hour journey is now a two-hour, two-and-a-half-hour journey by truck. So not only is it shaving off time from a logistic standpoint, but there's less opportunity for the product to be damaged, lost, or to have excursions out of environment.”

The firm is confident it will be able to fill the new facilities. “We're optimistic and bullish on the need that's there,” Braddock said.

Because the industry is highly regulated, companies that wish to use Frontier’s space must inspect it as part of their internal control protocols. “We’ve already had companies come in and do audits,” Braddock said.

Currently a team of seven, Frontier Scientific Solutions will gear up to a crew of 15 in the next several months and aims to swell to more than 100 by the end of next year to coincide with the opening of the new airport facility. “We’ll be ramping up over the course of 2023,” Braddock said.

A majority of the roles the firm will need to fill are quality-control-related, requiring a range of educational experience. Frontier has already had one round of specialized training from Cape Fear Community College and anticipates receiving another in the next month or two, according to Braddock. The firm is working with the University of North Carolina Wilmington to attempt to attract veterans that participate in the university’s military affairs program.

“Over the past two years, we’ve been very pleased with the assistance of working with regional stakeholders, who have provided us with guidance and assistance as we become operational,” he said.

Streamlining the North Carolina supply chain is integral to the company’s mission, Braddock said. “To keep the revenue in North Carolina, that is really the genesis of Frontier Scientific Solutions,” he said.

For more on Frontier Scientific Solutions and the growth of the life sciences sector, check out Friday's issue of the Greater Wilmington Business Journal.